On May 1st, lily-of-the-valley and the first new issue of Glamour were distributed. Born in 1939 in the US and in 2005 in France, the women's magazine changed its logo and layout several times before taking a radical turn at the beginning of May.
In the USA, it has a new black and white logo with a new model. The french version did not change its logo (or so?) but released a new "issue 1" in March with a new layout and editorial line, 13 years after its launch.

Under the direction of Samantha Barry, the new editor-in-chief from the world of TV media, Glamour USA magazine has dressed up with a new set addressed to "smart girls", and no longer to "good girls". Nathalie Kirsheh is the artistic director, and both women are aiming for the Pulitzer Prize to compete with GQ.

A theme focused on money, a typeface stick that prefers black to pink, a target smarter than beautiful... one would almost wonder if Glamour aims to seduce all the opposite of the women he targeted until then, while keeping his style well gendered. As if going from pink to black, and from bling to bill (from shine to silver) were enough to change genre, or target. Perhaps we should start to consider men and women as individuals and not as genders, to move things forward? Finally, this is another debate.

In France, the logo does not change, but the editors now decide to address connected women, and to highlight current topics rather than seasonal it-bags. It remains to be seen whether readers will follow and whether the monthly will attract new readers. The new issue features "living without filters and escaping stereotypes", talks about RAP and politics. A promising and surprising title, especially when you remember the fashion advice of the old issues "make your dressing room vibrate" or "sweep away your hair anxieties". 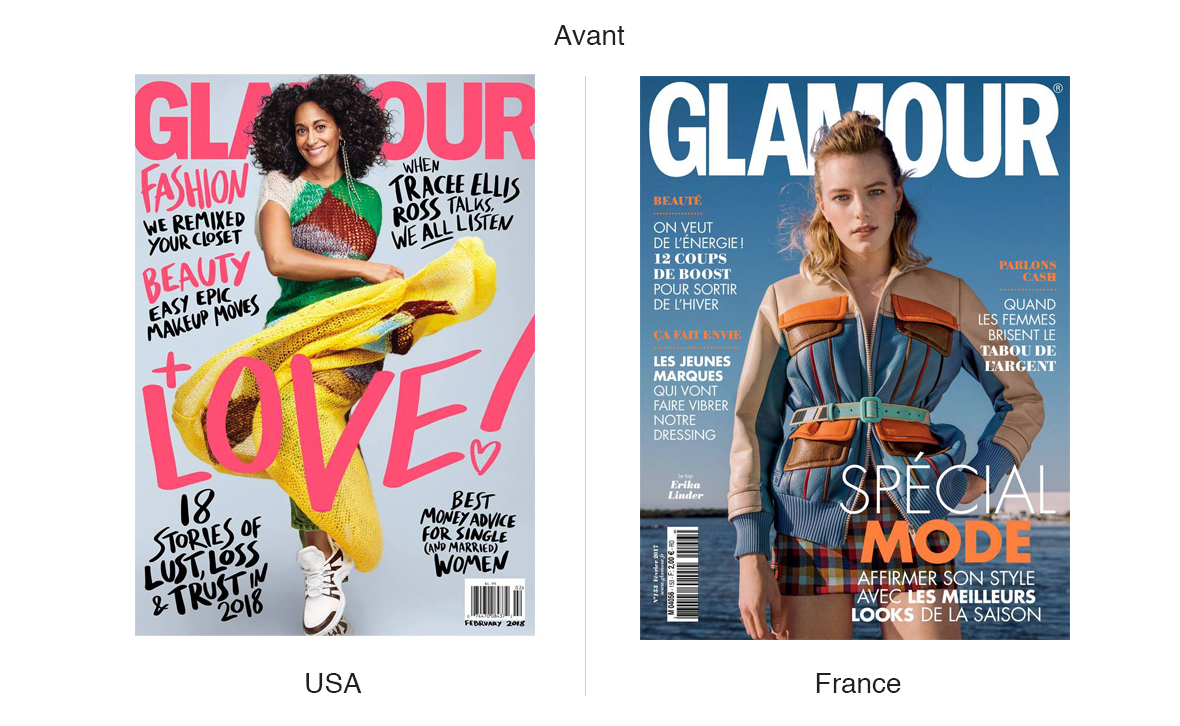 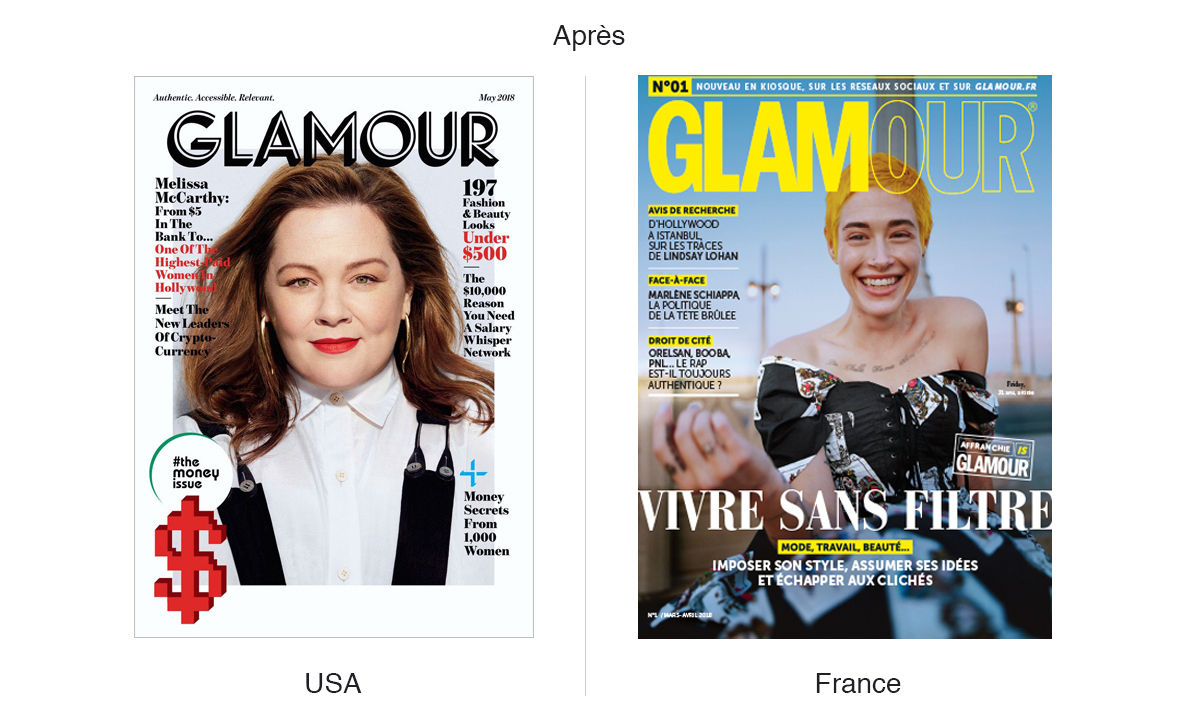 Going through the archives of the magazine, we created a small chronological frieze of their covers. It is an opportunity to observe the evolution of the so-called "women's press" over the past 80 years. 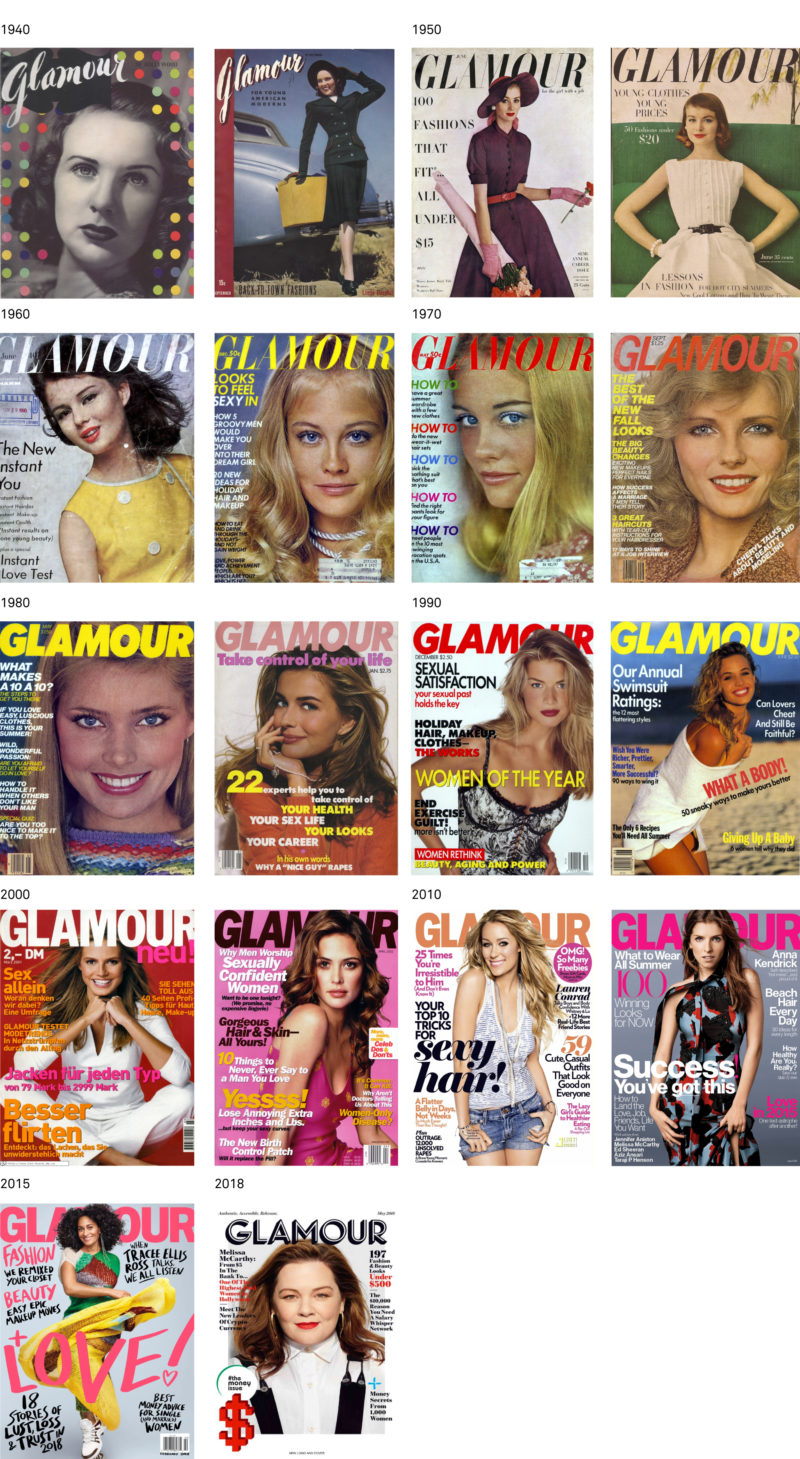 From Hollywood glamour to global #Metoo?

In the 1940s, the first issues of the american magazine highlighted Hollywood stars, and illustrated "the path to Fashion, Beauty, and Charm". Its name, "Glamour of Hollywood", quickly turns into "Glamour".

It can be noted that between 1960 and 2000, almost all women were blonde with blue eyes. Great representativity of the american population isn't it... Apart from a noticed issue in 1968 with a black woman on the cover, it will be necessary to wait until 2010 to see the democratization of black models on the cover.

As for the "hyper-sexual" representation of women, we note that this increases from the 1990s, reaching its peak in the years 2010.

The study of body language, a true science, allows us to decode the hidden meaning of these suggestive postures. No need to be out of Jupiter's thigh to decipher all those stereotyped and outrageous signals that have forged Western female identity for 50 years.

Body language specialist Allan Pease tells us that "it is the enhancement of sexual differences that gives a person a sexy appearance. So, if a woman wants to please, she will curl her loins to enhance her buttocks, tuck in her belly to accentuate the finesse of her waist, inflate her chest to draw your attention to her breasts... She will also touch her hair, or wrinkle her dress in a suggestive way (Cf: 2010 cover below), caressing the curve of her hip (cf: 1990). Self-abuse is another way of drawing the male's attention to sexual differences. There, one can only note with dismay that the almost totality of Glamour's covers from the 80s onwards present these forms of "self-touchments", while the post-war woman is more assertive, upright and dignified. The more the years go by, the more the woman reveals and undresses herself under the photographer's lens. Where a suggestive look was enough in the 40s, a hair of dream 30 years later, it is the shoulders, then the legs, then the belly and the breasts which surface. Same pattern in other women's magazines.

Meanwhile, #Metoo has appeared.
The objectification of the woman is no longer in the smell of holiness (finally!). After having maintained this image of "be beautiful and quiet", Glamour has no choice but to react, and to reposition itself by putting forward other dimensions of femininity with women who think, act, and succeed (yes yes, it exists).

But then why keep the name "Glamour"?

But what is glamour? According to several definitions more or less provided found on the canvas, the glamour is related to the woman, the status of star, and the charm.

Larousse: Sophisticated sex appeal, characteristic of some Hollywood stars.
Wiktionary: Bewitching charm, seduction that a movie actress or a pretty woman exerts through her sensual attitude and suggestive clothing. A charm to be seen, a primed and wise seduction, represented notably in american cinema, where decency vies with audacity.
Sensagent: Sensual charm of actors.
Le Monde: Bewitching charm, seduction that an actress or a pretty woman exerts by her attitude and her dress.

In view of its new editorial focus - more on being than on appearing - we wonder if Glamour would not have done better to change its name and go for a little strategic rebranding?

It must be said that the magazine Glamour suffers from a significant drop in sales in France (-21% in 4 years) and in the United States, because of the rise of digital and probably due to the consumerist and artificial content that perhaps begins to annoy readers, more and more turned towards natural or "slow fashion" (not you?). To cope with this decline, in addition to the new editorial focus and packaging, Glamour now promises fewer issues published and more media content.

The magazine announced in France that it no longer wanted to put models at the head of the bill and talk less about Fashion and Consumption. We'll have to wait for the second issue to validate the theory. In the meantime, no more stars on the cover of Glamour and hello to "inspiring" girls (but not "lambda" either, no bullshit): life without filter okay, but always with good old Photoshop!

McDonlads turns over its logo for International Women’s Rights Day… 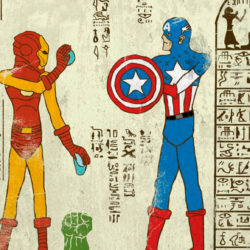 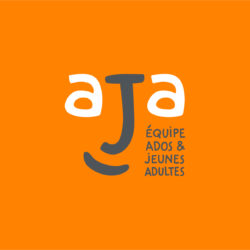