Montluçon, sub-prefecture of Allier, halfway between Bourges and Clermont Ferrand is a city of 39 000 inhabitants, located in the heart of France. The Cher River marks the structure and the urban rhythm of the city, by opposing its dynamics and its semi-natural layout. This river divides the city into two parts: the city center and the left bank. The development project of the riverbanks allows to transform this cut into a link between the two banks and its inhabitants.

These development projects radiate from the Cher axis and are built around a common identity: the renovated Faubourg Saint-Pierre leads to a new station district that opens up on the other side of the tracks and the Cher; the Pierre Leroux and La Verrerie districts are being reshaped and have seen their economic role strengthened as well as their local centrality.

The cedilla is a diacritical sign placed under a letter to indicate a change in its pronunciation, as is the case for the city of Montluçon. In this visual identity, the reference to the cedilla underlines both the singularity of the city as well as the course of the river that runs through it, the Cher. If the "C" represents the Cher, the cedilla represents the ambition of the urbanization project to create a bridge between the two banks to reunify Montluçon.

Thus the cedilla becomes the central element of the communication device. It will be multiple, changing, alive, creating an infinity of variations, becoming the central motif of this visual identity. The choice of the green color, bright and luminous, refers to the idea of a vibrant and contemporary nature. 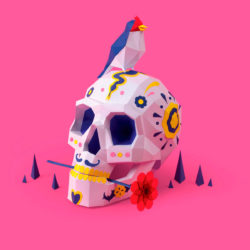