Les Franciscaines de Deauville is a hybrid, open-ended cultural space that houses a museum, an auditorium, a collection of André Hambourg's artworks, thematic photographic exhibitions, and a reading and documentation space. Founded as a place for meeting and sharing, Les Franciscaines is a significant cultural and urban living project taken on by the city of Deauville in the heart of Normandy.

Graphéine worked with Deauville to create the visual identity of this unique place. The architecture of the building is remarkable: it is a former convent of the Franciscan Sisters dating from the 19th century, rehabilitated for the occasion by the architectural firm Moatti-Rivière. The space is open, its different universes communicate with each other while offering an intimate setting.

Right from the project study during the initial pitch stage, we have given great importance to the architectural dimension to define the visual identity of Les Franciscaines. The study of the building allowed us to appreciate this highly open space with a great potential for free movement. From a bird’s eye view of the project, we discovered the letter "F" that the building creates when viewed from the sky. The choice of the monogram was then an instant realization, both for its evocative force and its effectiveness in communicating a new offer in the daily life of Deauville’s inhabitants.

Deauville is also, and most importantly, its wooden promenade along the beach, its photography festival, its American film festival, its Casino and its horse-riding culture which make it a glamorous and chic holiday destination. The graphic choice of the "F monogram" embodies the role of an ambassador by representing the Deauville ethos beyond the city's borders. Its style is also a nod to the "retro-chic" stripes of beach umbrellas and swimsuits. This graphic identity is a tribute to the city, its population and the imagination it conveys.

The geometric "Belle Époque" style and the openness of the monogram communicate the ambition of the place: A space for movement that encourages curiosity and sharing. The design of the Les Franciscaines logotype was inspired by the Art Deco style, and adapted for the stencil treatment required for the signage. The openings in the letters A and R create a visual connection to the open style of the monogram. The result is a contemporary and powerful logotype.

In order to express the cultural richness of Les Franciscaines de Deauville, the brand guidelines emphasize the usage of imagery to express the artists and the characteristic sectors of the territory. The monogram plays with the image and intertwines with the iconography, bringing a sense of depth to the visuals. The interaction of the logo with the program expresses the exchange and sharing that is created between the public and culture. Imagery comes alive to represent a place of life. The visuals are sometimes added together like a photographic film to represent the diversity of the universes.

Verlag and Cera Stencil were selected as the accompanying typefaces. Verlag is a direct extension of the architectural style used in the brand’s logotype. Its style echoes the Bauhaus in a less geometric, more refined way. Cera Stencil was originally chosen for the stencil signage application. It functions well with Verlag and is also used in publications to create hierarchy in drop caps and pull quotes.

"L'imaginaire à l'œuvre", an aspirational slogan to embody the spirit of Les Franciscaines

We also created a slogan to translate the DNA of Les Franciscaines:
« L’imaginaire à l’œuvre » ("Let your mind wonder" for english translation).
It can be interpreted in two ways: From the artist-author’s perspective it can mean - "From the imagination to the realized work of art"; and from the visitor-spectator’s point of view it can mean "inspiration in action".
This sentence emphasizes the symbiosis of dreaming and action. It is a literary turn of phrase that evokes the larger mission of the place in a poetic way to arouse the curiosity of the public. A place of endless possibilities that everyone can envision and interpret as they wish.

With a constant intention to think of Les Franciscaines as a place of life for everyone, we have designed a warm and intimate signage as well as a naming system for the different spaces: the Refectory, the Auditorium, the exhibition courtyard, the Equestrian Universe, the Art of Living Universe, etc...
These titles are incorporated vertically in the spaces to attract the attention of visitors. They are accompanied by a gallery of pictograms that recall the major themes of the city: a horse, an emblematic parasol, a camera, etc... These custom-designed pictograms maintain a stencil and fluid design style.

A tribute to the city, its heritage, and its creativity, the visual identity of Les Franciscaines de Deauville meets the challenge of creating an elegant and accessible brand. The former Franciscan convent manages to retain the DNA of a place of great hospitality where imagination is at work!

The City of Deauville has long since chosen an economic development strategy based on tourism and cultural events, which have now become its primary attractions. The creation of quality infrastructures (CID Convention Center, Reception Villas, Le Cercle, International Hippodrome, Sports Park, etc.) underpins this proactive policy of hosting major events and conferences in Deauville. The Franciscaines project was launched in keeping with this strategy to create a sustainable cultural institution, with a museum, media library and a place buzzing with activity.

Resulting from a process of innovation and experimentation, the identity of Les Franciscaines is reflected in the very nature of its cultural positioning and in the place of the user-actor within the project. The mission entrusted to Graphéine was to conceive the creative axis of the communication of "Les Franciscaines: museum - media library - place of life" a cultural institution of the City of Deauville; to elaborate the graphic and editorial guidelines, as well as to implement the brand language on the printed and audiovisual communications. 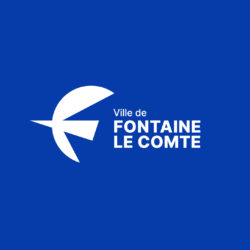