“Can the flapping of a fly's wings in Saint-Genis-Laval cause a tornado in Texas?”

The hijacking of this famous formula used by Edward Lorenz to describe the chaos' theory illustrate our vision of the new visual identity for LA MOUCHE cultural center.
By using graphic codes from optical art, the monogram "M" becomes the symbol of a place that assumes its mission of cultural epicenter on a territorial level. This seismic shock wave becomes the motif of a vibrant and radiant season that unfolds joyfully in the urban space. It is also an opportunity to introduce motion design and digital as new communication tools to create a resolutely modern identity.

The new visual system is accompanied by the creation of a customed typeface whose design presents characteristic openings inherited from the graphic style of the "M" monogram of the "LA MOUCHE" logo. This lettering is intended to be used to set titlings through all communication media of the cultural center. It's a flexible visual code that creates an effective, original and identifiable brand territory. 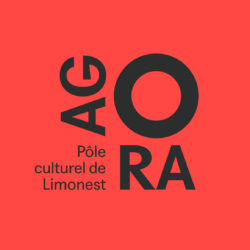