Home / Blog / Insights on graphic design / In India, the political logos are of a very original banality

India is the largest democracy on Earth with 814 million voters (out of 1.2 billion inhabitants). Among them, 1/4 are totally illiterate and another quarter do not read well enough. So, when it comes to elections, we have to find ways to gather voters under a relevant political logo. Two questions surface: how to ensure that people who cannot read elect the "right" political party, and, how to avoid fraud? India has come up with two unique solutions.

The logos of the political parties in India are of a banality...

If you were an Indian, you would probably vote not for a shiny political logo of a music-loving candidate, but for the bicycle, school bus or lotus flower party. Or would you prefer the purse, elephant or harmonium? These funny symbols are no joke and have been used to represent political parties since India's independence and the first elections in 1951.

How are political logos created in India?

The designs are by M.S. Sethi, an industrial designer hired by the ballot committee in 1950, who hand-drew these political symbols for 40 years. Hence their retro look, as if taken from children's books. We find for example the gas pump, the hat, the frying pan, the gas can, the belt, the diamond necklace, the pimento cheese or the nail clippers. You can find the list of symbols used on this wikipedia page. 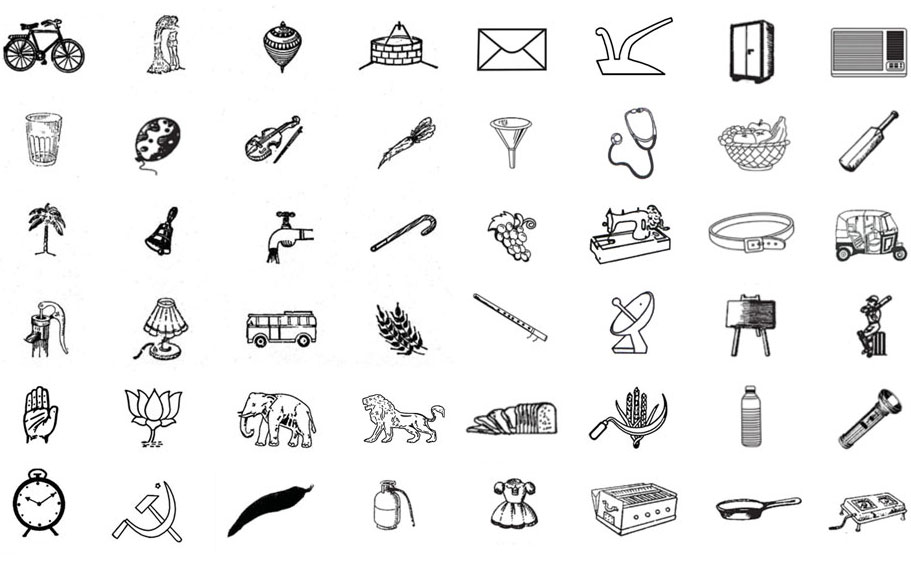 Some drawings proposed as logos of political parties in India

More than just designs, the logos of Indian political parties are a testimony to the evolution of the nation's daily life over the years, towards more and more modernity. The first symbols illustrated a rural India: the plow, the ox. In the 60s, we saw the appearance of the tractor, the electric pylon... For the 2019 elections, the laptop charger, the computer mouse and the USB key have been added to the catalog. We also find a gas stove, or an air conditioner. 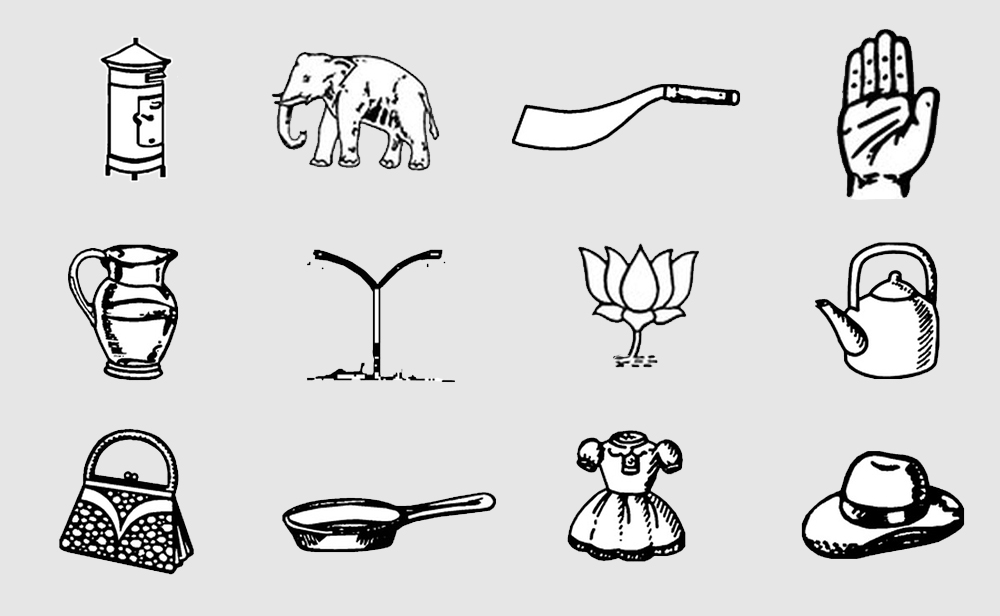 In order to speak to the greatest number of people, these symbols-logos must be simple, without religious connotations or associations with national pride (the Taj Mahal is excluded for example). They are mostly everyday objects, drawn from food, fashion, kitchen utensils or means of locomotion and sports. They are deliberately meant to be neutral.

With a few exceptions, animals are banned from the register of political party logos. They have been used to parade during election campaigns, and animal rights groups wanted to prevent some of the animals chosen as mascots from being lynched by party opponents... Only the lion (Maharashtrawadi Gomantak Party), the elephant (Bahujan Samaj Party) and the rooster (Naga People's Front) resisted. 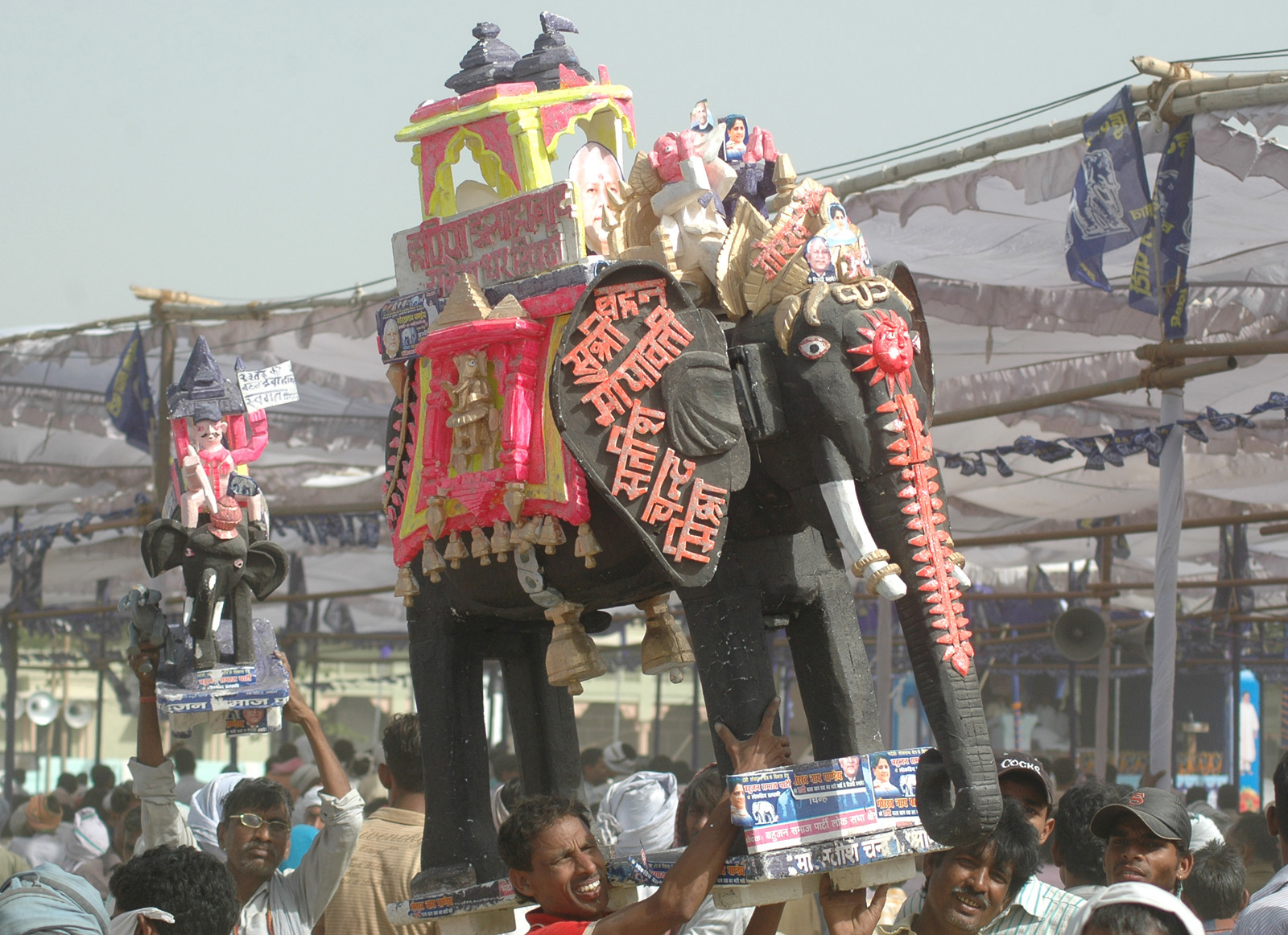 The symbols of the political parties are proposed by the catalog of the election committee, among those which are not yet used. The parties choose 3 designs in order of preference, and the committee gives them a choice, which will be reserved for them. In case of disagreements and changes in the parties, the symbols are changed. But how to choose between the pylon, the cow and the fan?

Some parties were lucky enough to choose early on designs with a recognized symbolism in their country, or a strong meaning. The Congress party was originally represented by two cows and a plough from 1952 to 1969, before settling for the palm in 1977. In the meantime, the party was represented by a heifer and her calf.
It should be remembered that the cow is sacred in India and that this animal erected here as a political symbol is far from being insignificant. The Congress party is the one that fought (non-violently) for India's independence after the 1920s, under the influence of Mahatma Gandhi. The symbol of the hand says stop, it also welcomes, it greets. And it works.

But above all, in India, the open palm is the symbol of the benevolent and transparent "white hand", a gesture taken up by the party to mean that it has nothing to hide. It is the gesture that one makes as a blessing, and one often sees in India the elderly making this sign towards small children. So the open palm is very meaningful. 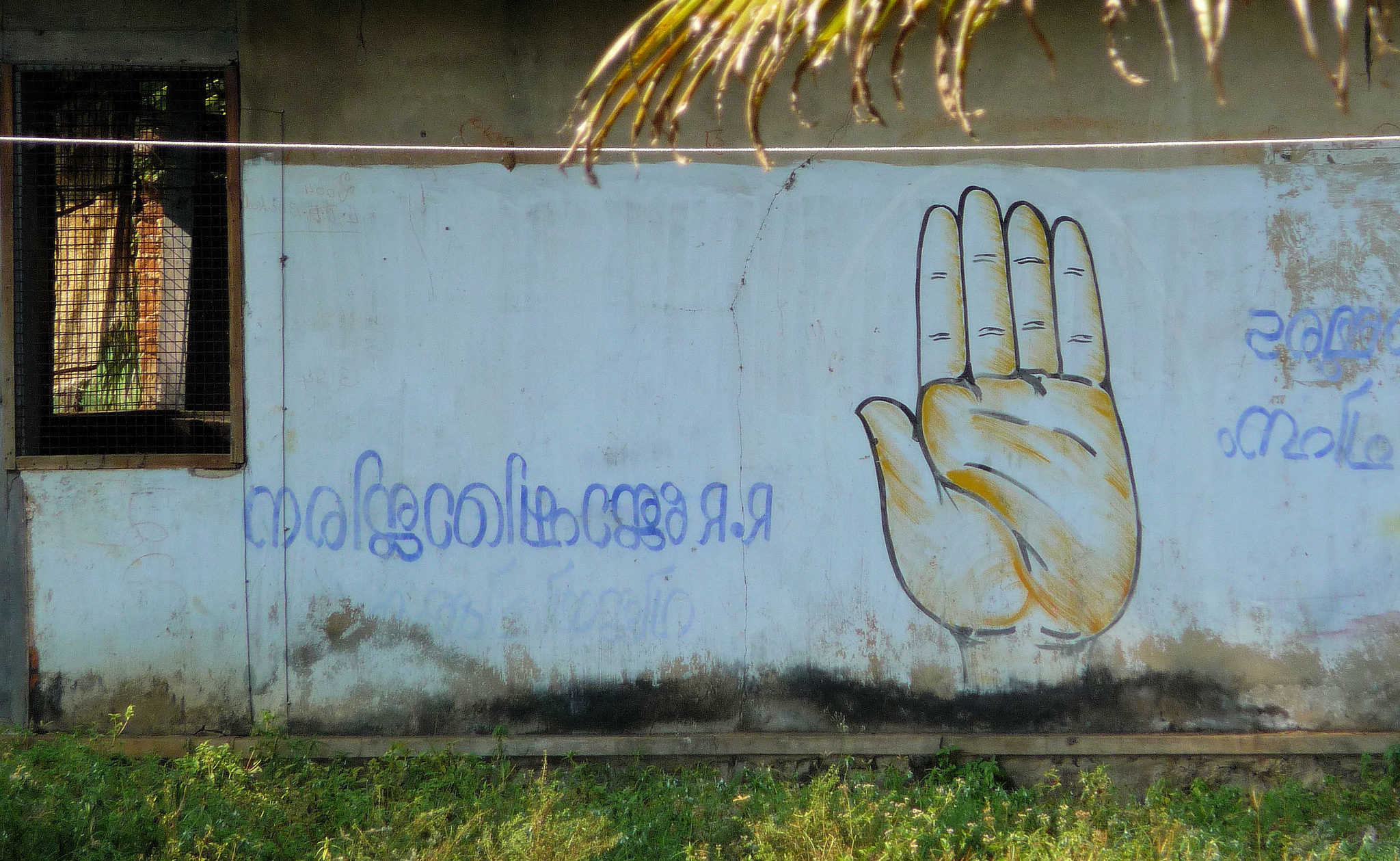 The BJP (People's Party of India), its main competitor, had chosen an oil lamp as a political party logo, then a man with a plough, before adopting the lotus flower. Symbols obviously richer in meaning than a cast iron pan...

The oil lamp is very much used in India, especially during religious ceremonies and mainly during the celebration of Diwali ("row of lights") which corresponds to the Hindu New Year. True festival of lights, it celebrates goddesses and gods, including Lakshmi.
The lotus flower is recognized as the flower whose roots emerge from the opaque mud to bloom in the transparency of the air. It symbolizes spiritual awakening and the overcoming of one's condition, but also purity and eternity. It is used as a symbol or offering in Buddhism and Hindu religion. Although symbols with religious connotations are forbidden, these are charged with them. 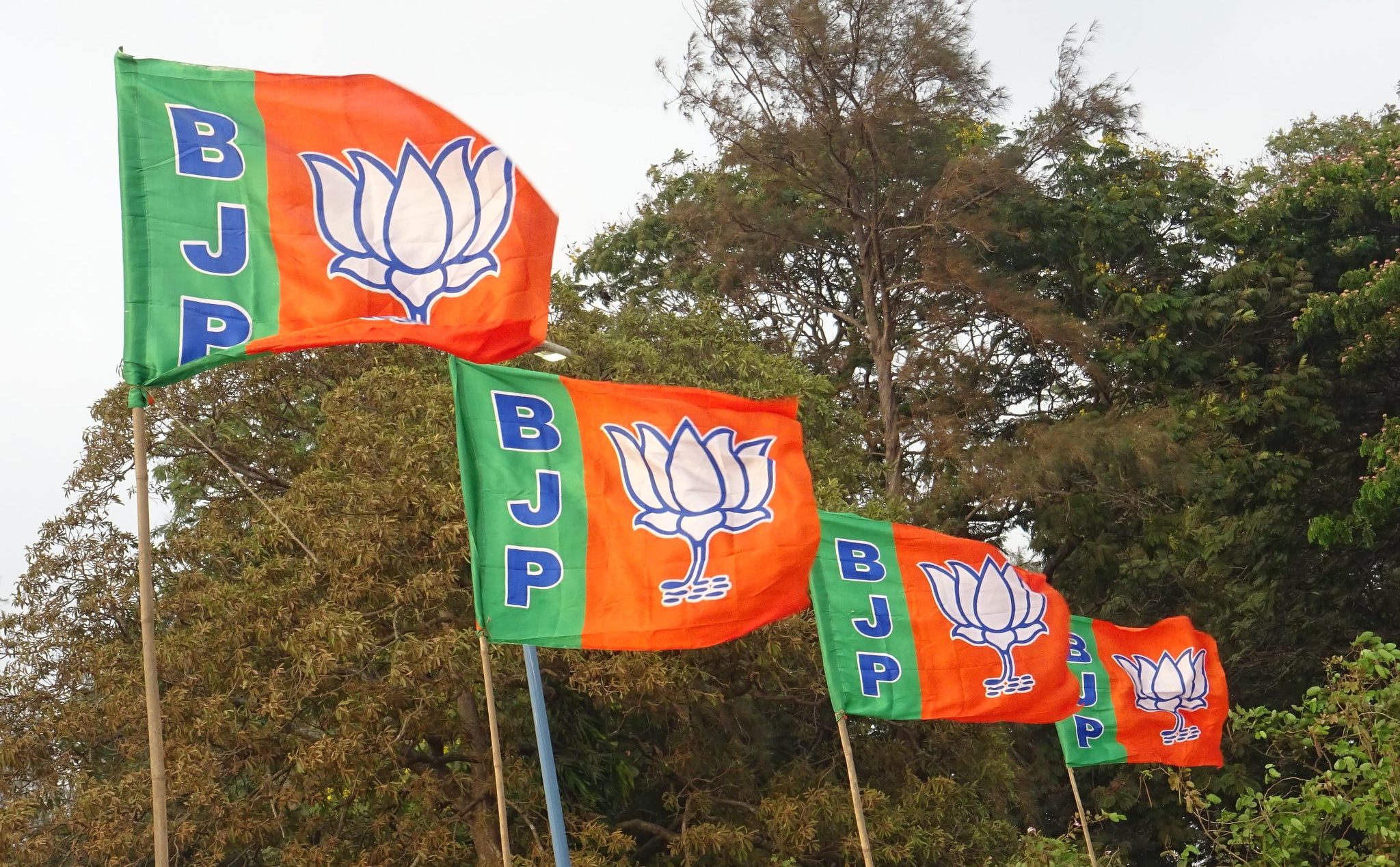 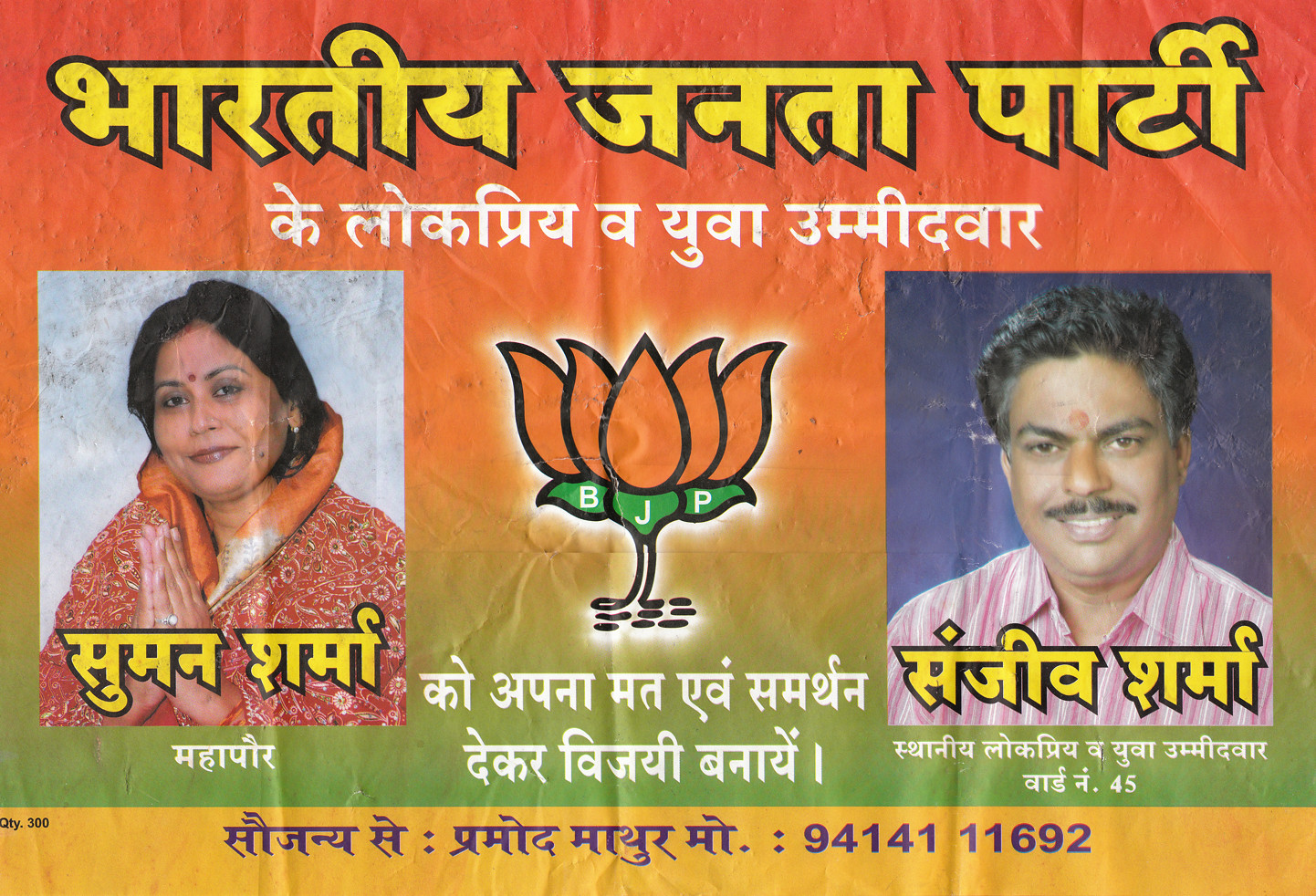 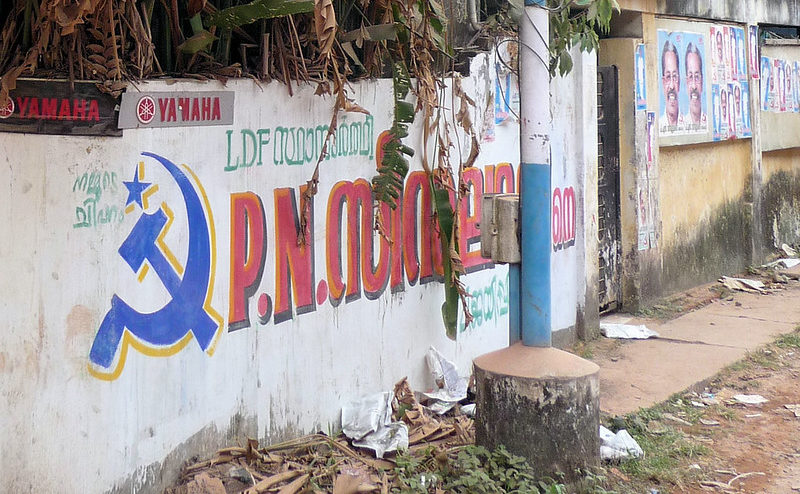 Making the best of the worst

Other political parties, which arrived later, invent a message from the less attractive objects that remain. It is necessary to adapt.
The Nationalist Congress party has chosen a wake-up call, surely to say that it is time.
Because with time, there are less and less "grandiose" symbols left. Nevertheless, some parties manage to create a "brand image" and tell a story that will enhance their party. Even with a symbol like the broom. This is the case of the Aam Aadmi Party, whose symbol is supposed to "clean the dirt embedded in the Indian government and legislature". 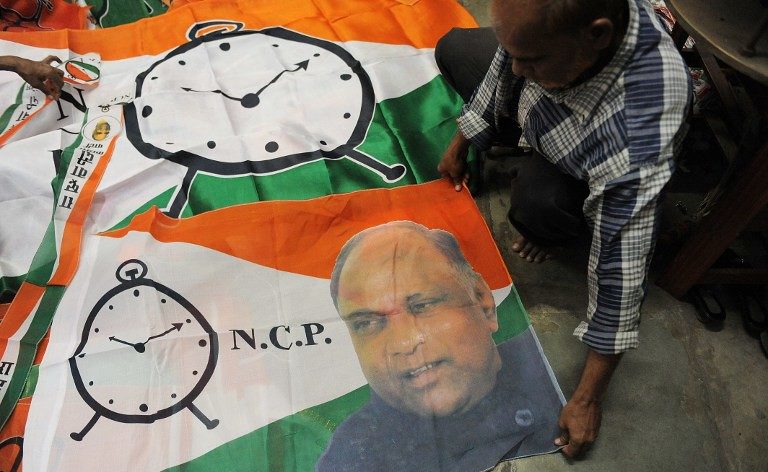 There is also a political party that has adopted the tea-cup logo, but it is not clear why. Maybe to make people feel comfortable with a good tea party? (This is a play on words between tea party and political party, to be precise, and it's quite good). 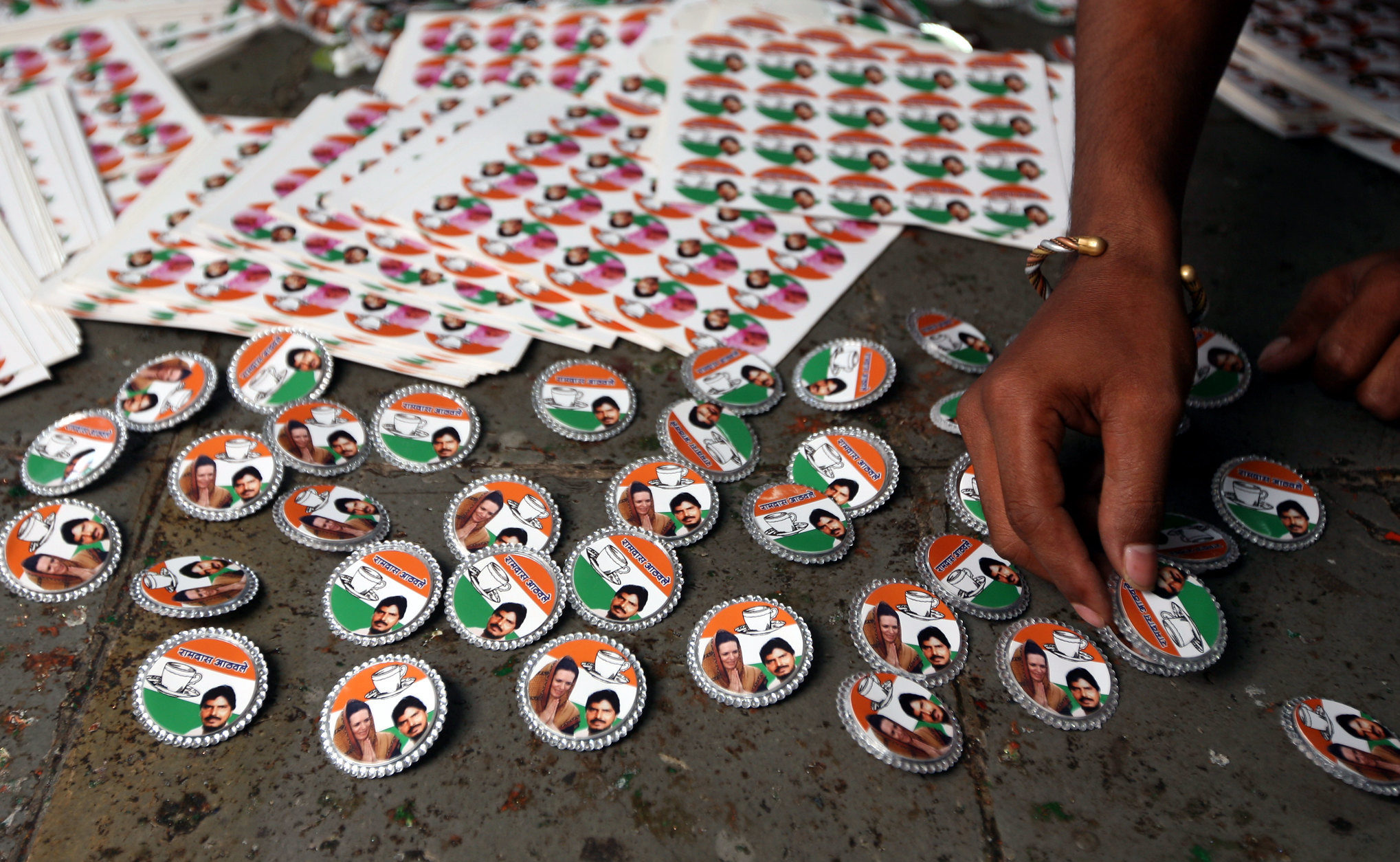 Can we really call these political logos?

Born from the banality of everyday life, these "logos" are unique in the world of politics. A thousand miles from representing a candidate and a party, we could not reach the citizens better. All these obsolete objects of the everyday life knew how to put forward simple objects which resisted the time without taking a wrinkle or almost, after 80 years of life. This is their main strength. You can still find kettles, rickshaws and bows in India. Logos without really being, they are plastered in the city, with the colors of the country: orange, white and green.

Here we see two variations of the BSP motif, with more or less realistic elephants that nevertheless remain perfectly recognizable as elephants, and therefore political logos. The actual shape of these political logos does not matter, as long as one recognizes the acronym. It is therefore a popular and malleable archetype, usable by the people. The essence of the social logo !

We talk to you in detail about the birth of street messages in our article on feminicide collages and the branding of social movements in general. 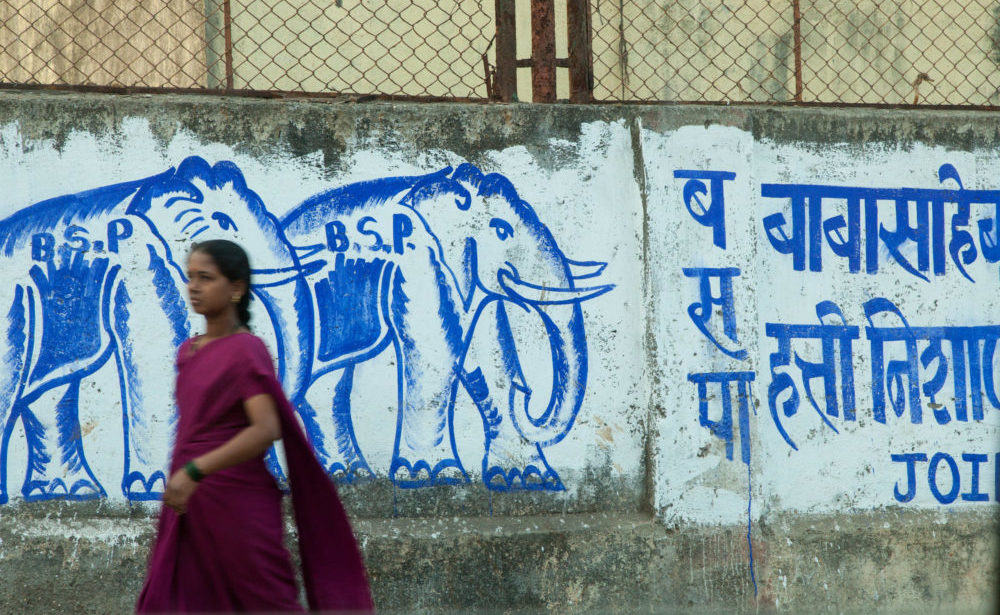 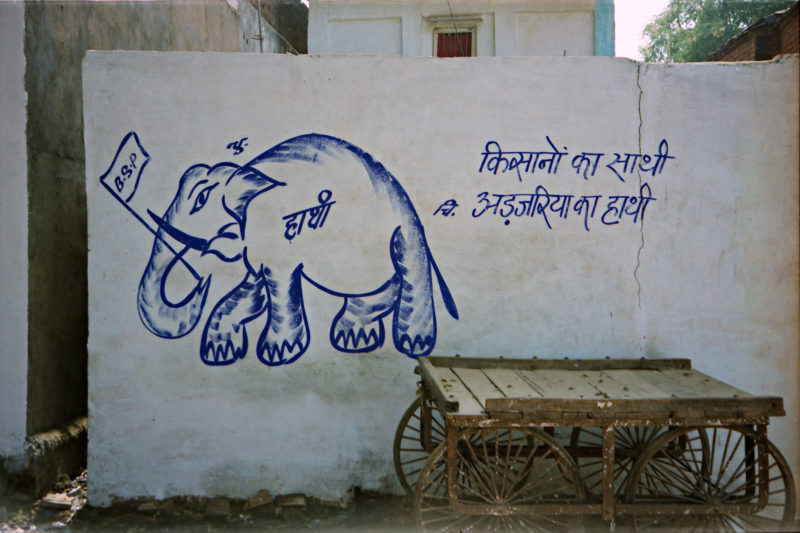 Another symbol, and not the least, is the blank vote or NOTA "None of the above". It appeared on the machines in 2009 but was first used in the 2013 election. It sometimes appears in full letters, or with the symbol of a crossed-out ballot. This is a first because until now, these symbols were purely visual and had no letters. 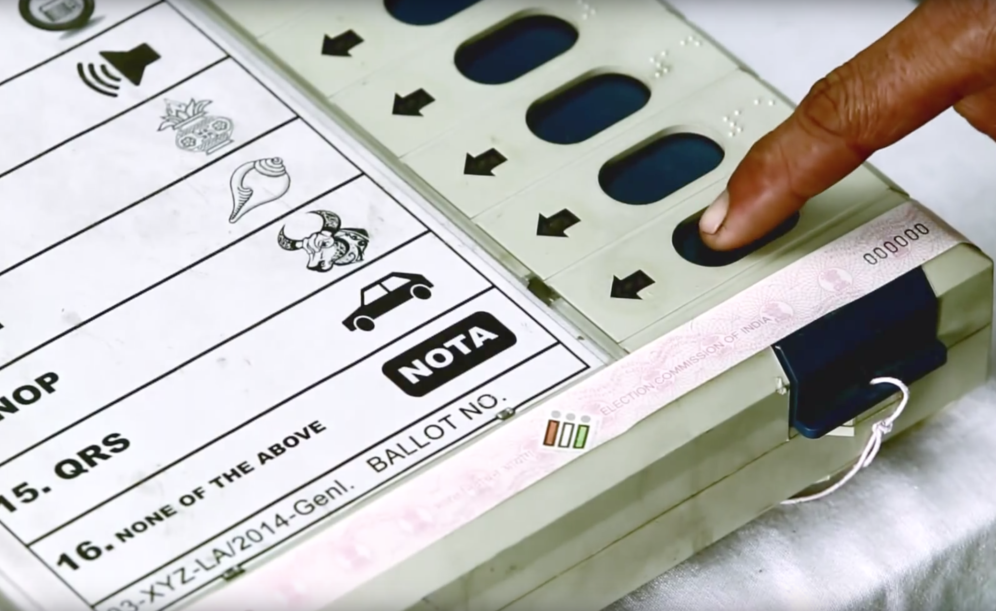 A visual solution for a textual problem

It should be noted that at the time of the establishment of the first symbols, the literacy rate was 18% compared to about 50% of literate people today (74% officially, but half of whom cannot read a text correctly). Not to mention the 860 languages present on the territory, and the two official ones (English and Hindi).
Since it was impossible for the illiterate voters to read the names of the elected officials, the image of an everyday object was an ideal solution. In addition to being easy to spot on the voting machine, they are easy-to-remember symbols that we come across in our daily lives, and therefore can also think about all the time. A perfect tool for political hammering! "My living room deserves a sweep... ha, I mustn't forget to go vote!"

Moreover, India is famous for its rich arts, paintings and calligraphies, and has always kept this tradition of illustrating its walls, store fronts or buses and rickshaws by hand. So it is not shocking to find yourself at the polling station or in the street in front of a hand-drawn political picture. 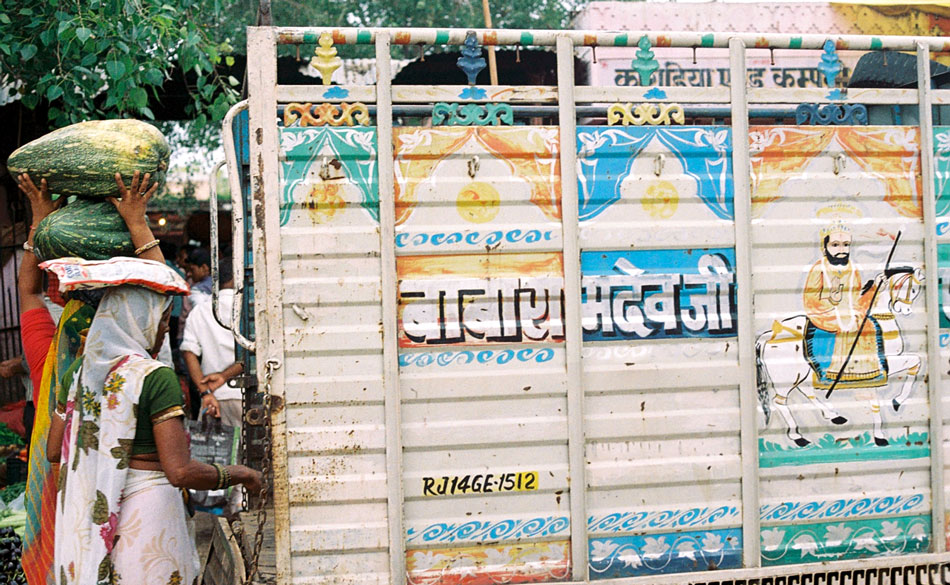 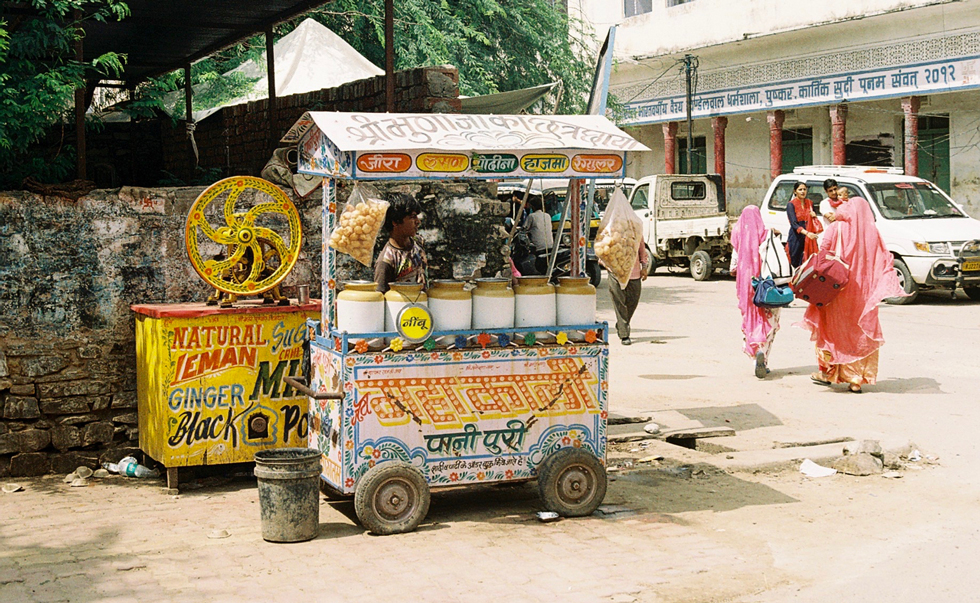 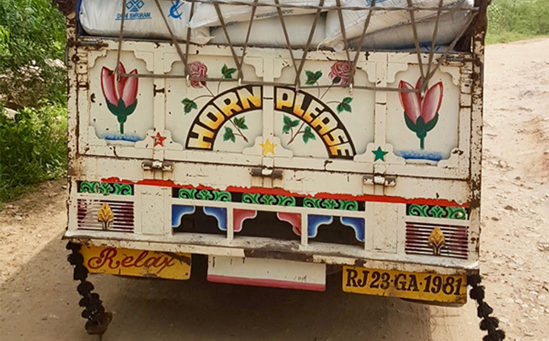 A button machine to prevent fraud

As for the Electronic Voting Machine (EVM), it is also apparently simple. An interface with buttons, batteries, said symbols in front of said buttons, and it's done. No internet connection, no need for electricity (which can be useful in some remote villages), no operator system either: no way to hack it. With its unique unalterable and one-time programmable chip, it cannot be tampered with. 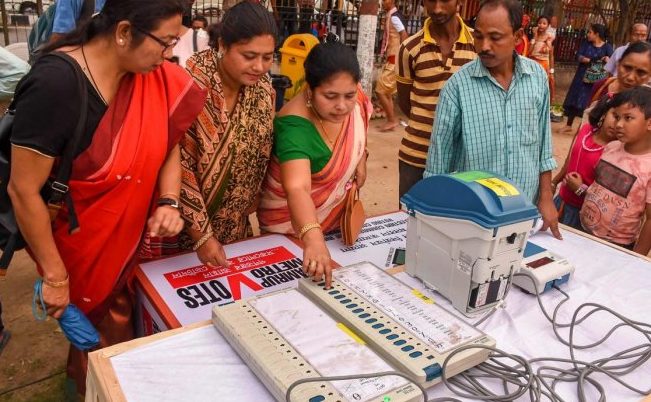 The voting platform, with drawings, is placed in the voting booth. It is connected by a cable to the polling station, where an official presses a button to allow voters to use the machine. The button cannot be pressed again by the voter unless the voting manager activates his or her button again within 20 seconds. Once the person has voted, a small printed ticket is taken out of the machine, and it is then put into a sealed ballot box. A few machines and a few ballot boxes are randomly compared to ensure the results. It is, in short, the simplest and most secure voting machine in the world.

Trump must be biting his fingers, but hey.

Speaking of fingers, the middle finger of the voters is marked with an indelible ink line, to prevent them from voting twice and thus avoiding fraud. 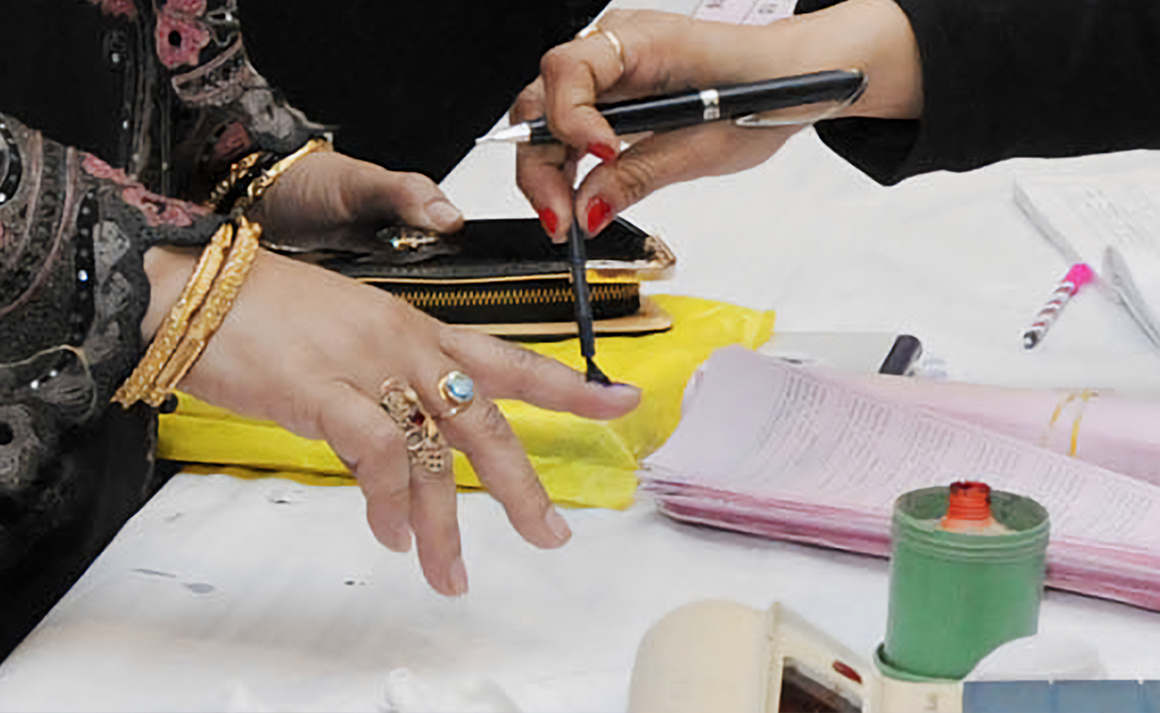 Another strong symbol of democracy that is often used in advertising campaigns, and by google on its homepage in India to encourage people to do their duty as citizens.

It can also be hijacked and used as a symbol of resistance... like here by the women who voted with their middle finger and not their index. 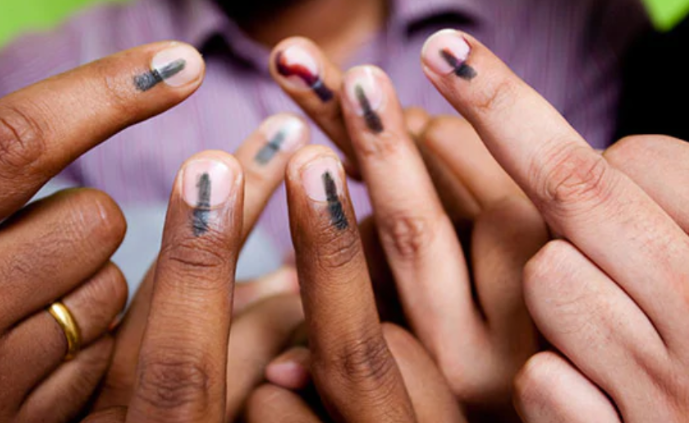 We will finish on this image to interpret as you wish.

Sources :
On the origin of political symbols in India

On the ultimate security of the Indian voting machine

All the symbols in a pdf file

A game to draw the indian political symbols

The graphic codes of post-modernism in brand logos