To continue our series of articles on the great names in graphic design, we told you a few weeks ago about Alexander Girard (1907-1993). We continue this time with an english graphic designer and illustrator little known in France. Yet, across the Channel, Edward Bawden is an illustrious illustrator!

Edward Bawden (1903-1989) was apparently a lonely child. His youth was divided between drawing classes where he copied cat drawings and spent afternoons hunting butterflies. His life was spent drawing a world with a lot of enchantment...

He first studied Fine Arts at the Cambridge School of Art and then at the Royal College of Art. There he met a group of young future talents such as Eric Ravilious, Douglas Bliss or Enid Marx. Don't worry, I too was unaware of the existence of these 3 illustrious great Britons. By the way, if the first two seem to be honorable painters, the third produced a very graphic work as a textile designer. For example, he designed the textile seats for the London Underground in 1937.

This is a digression that allows us to immerse ourselves in this pre-war period in England. When Edward Johnston tought Eric Gill the art of typography while working on London Underground signage.

Starting in 1928, Edward starts being a drawing and decorative arts teacher at Goldsmith's College and later at the Royal College of Arts.
He carries out private commissions in parallel with his teaching activity. That year, Sir Joseph Duveen, an English art dealer, commissioned him to create a mural for the refectory at Morley College at a rate of £1 a day. This amount seems ridiculous today... but it would correspond to about 60€ today.

During this period, for example, Shell commissioned him to decorate a mural for one of its new buildings, the London Underground commissioned him to produce posters, or he produced illustrations for Faber and Faber. Below is a wall decoration made in 1966 for British Petroleum.

The war was approaching, and he was officially named "Artist to the Armies". He travelled extensively during this period to follow the various regiments of the Kingdom. From this period, the Imperial War Museum keeps some archives, such as a rare interview of Bawden.

During the late 1950s and 1960s, Edward Bawden devoted much of his time to linocut and lithography. It was during this period that his work as an illustrator was fully expressed. Here is an overview of his work.

Lithography consists in drawing on a porous limestone with a grease pencil or paint, and specific products to treat the stone.

The stone is then wetted and the undrawn parts (in white) absorb the water which will repel the ink. The parts that are greased by the pencil retain the ink. We see all these steps in this second video about lithography.

Linocutting involves working with a sharp tool into a soft surface (lino, like your flooring) to remove material. As in printmaking, everything that is scraped off will be in hollow and therefore white, without paint. Several colors can be used as long as the lino plate is cleaned. Examples of linocuts can be seen in the horoscope illustrations below, or in the very last black and white illustrations that we see at the end, with clean, thick lines.

A Flickr gallery gathers some of his creations : www.flickr.com/groups/1289253@N22/
Sources: The images in this article are presented for educational purposes.

Vasarely, the father of optical art 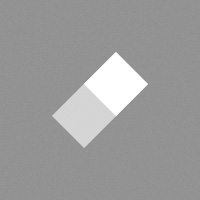