Home / Blog / Insights on graphic design / Codex Seraphinianus: the most peculiar book in the world 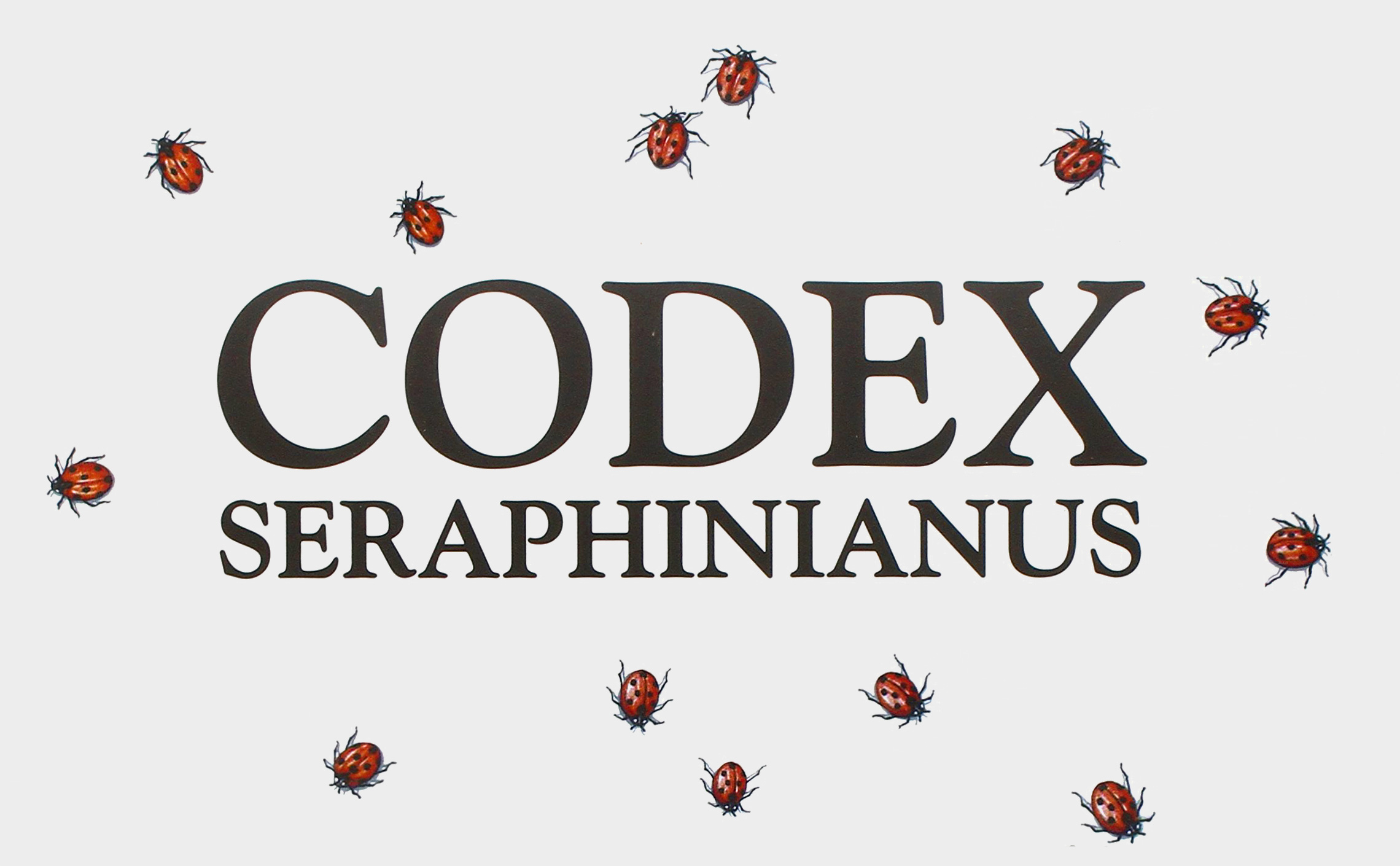 Codex Seraphinianus, from the Italian artist-stroke-architect Luigi Serafini, is a journey into unchartered territories with a science fiction backdrop. A quirky encyclopaedia of sorts - some may go as far as calling it extra-terrestrial. In this universe, even the alphabet is indescribable, and even less decipherable.

It was back in 1981 that the Codex Seraphinianus was published for the first time in two volumes. The illustrations from this article were taken from the 1983 edition, published by Abbeville in 370 pages. There is also an edition in just one volume from 1993, as well as an Italian edition revised by the author in 2006, complete with new illustrations. Whereas the first editions can be found between 400 and 600 euros, you can get hold of the latest for 200/300 euros.

The Codex Seraphinianus has been designed like an encyclopaedia of an extra-terrestrial universe – no doubt the absurd reflection of the world we live in. It is made up of chapters which describe the flora and fauna, science, machines, games, inhabitants, customs…

Flowers float, bananas are filled with medicine, cars covered in flies, and many beings are strangely dismembered or decked in weird or wonderful costumes. 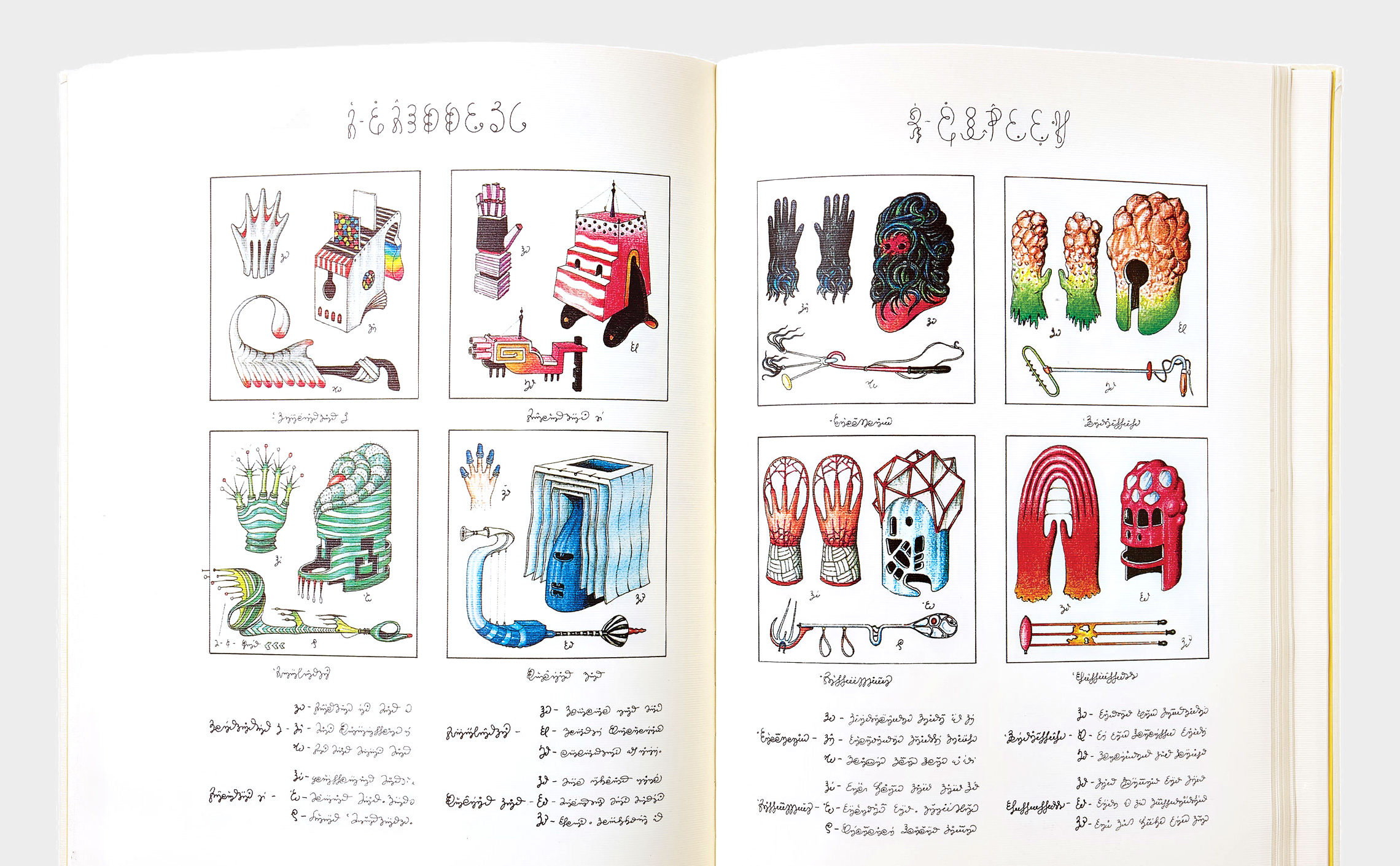 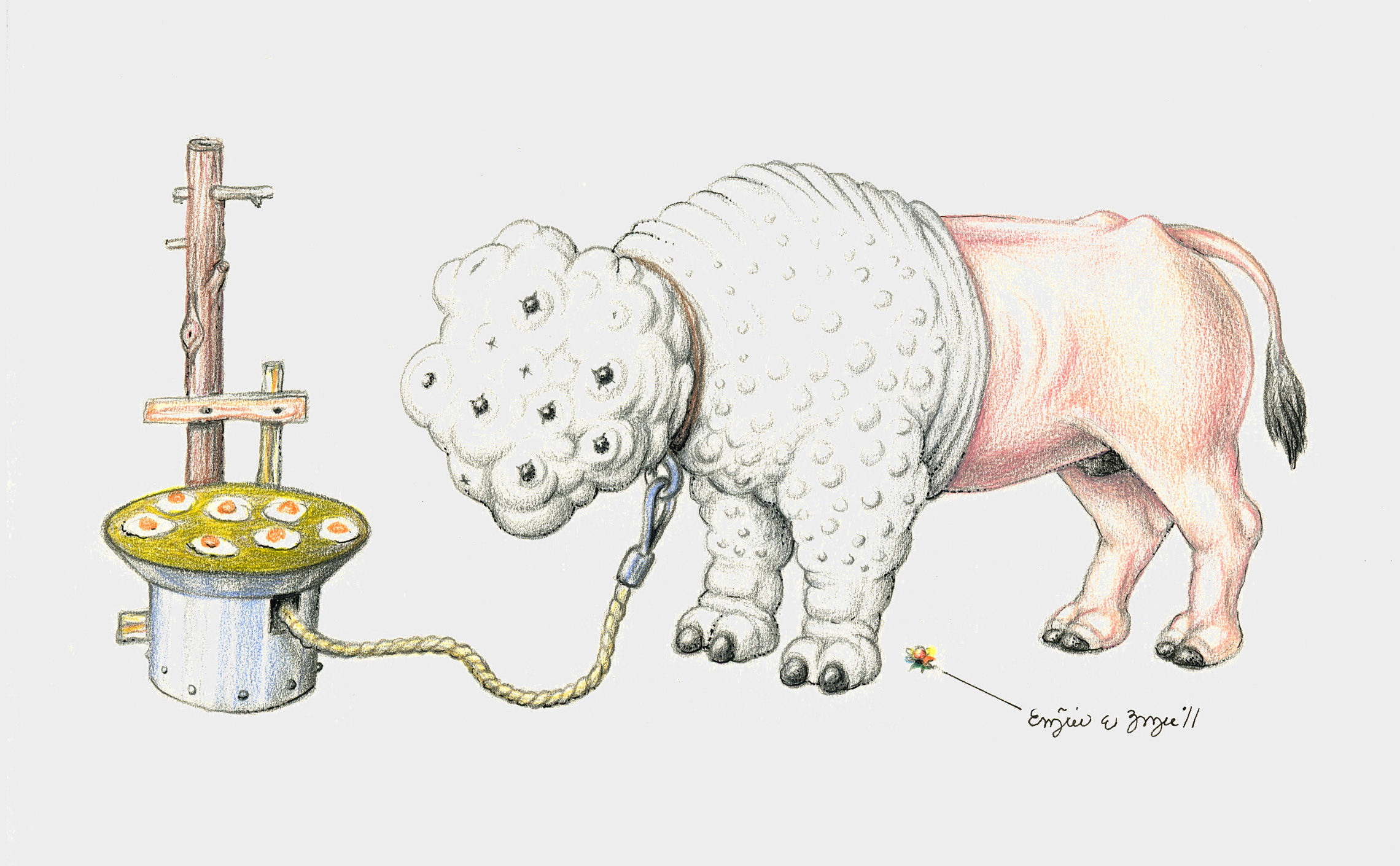 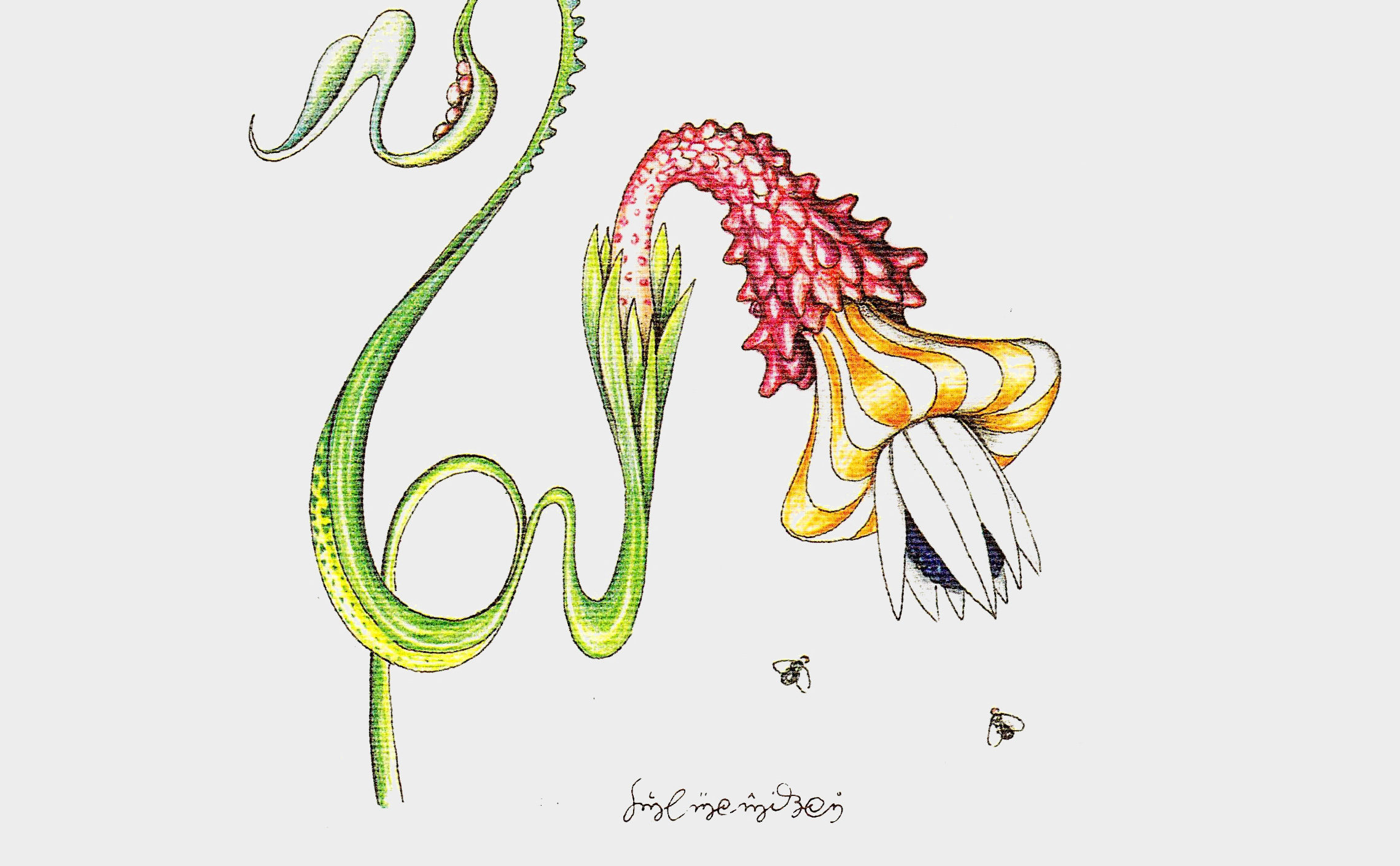 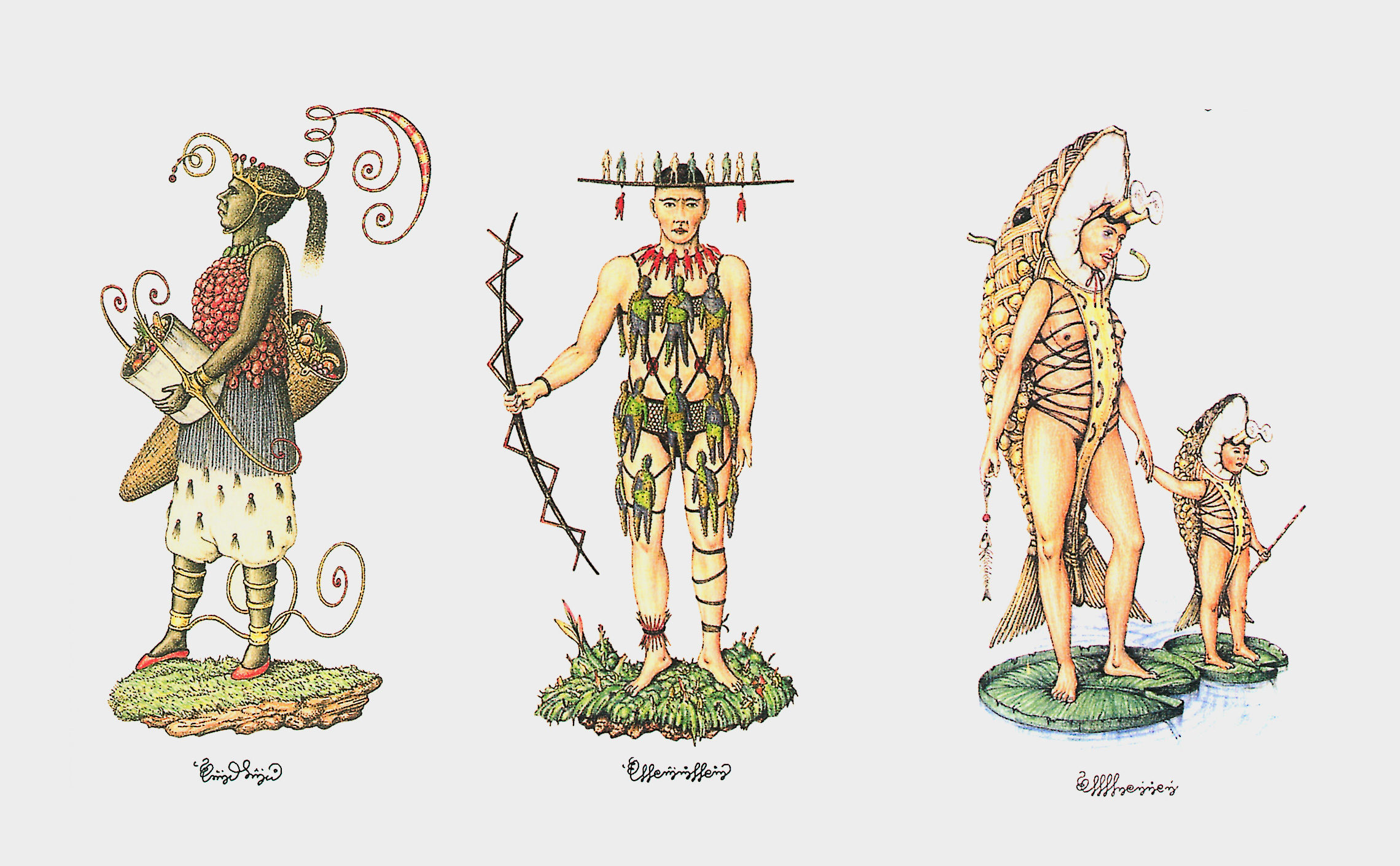 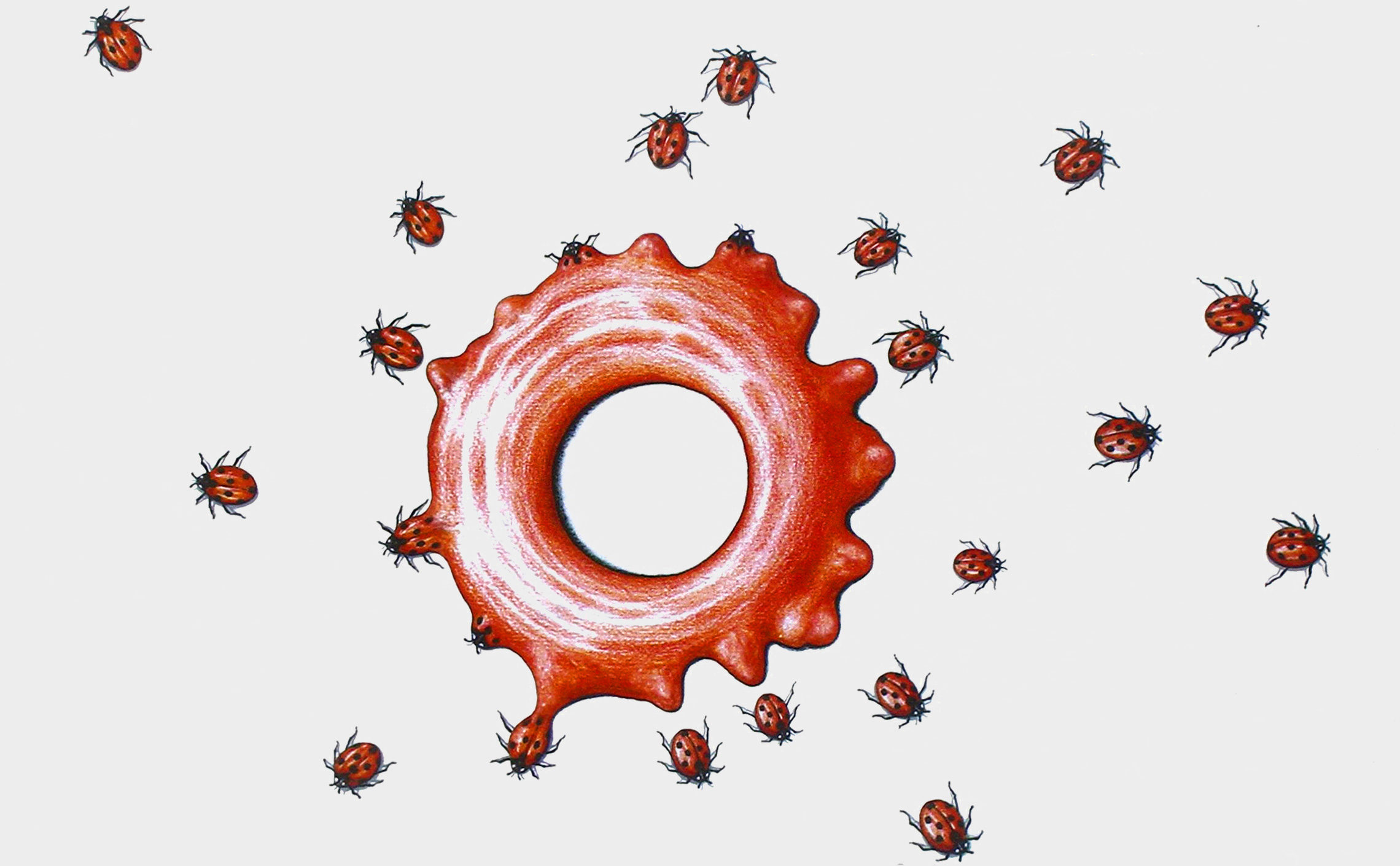 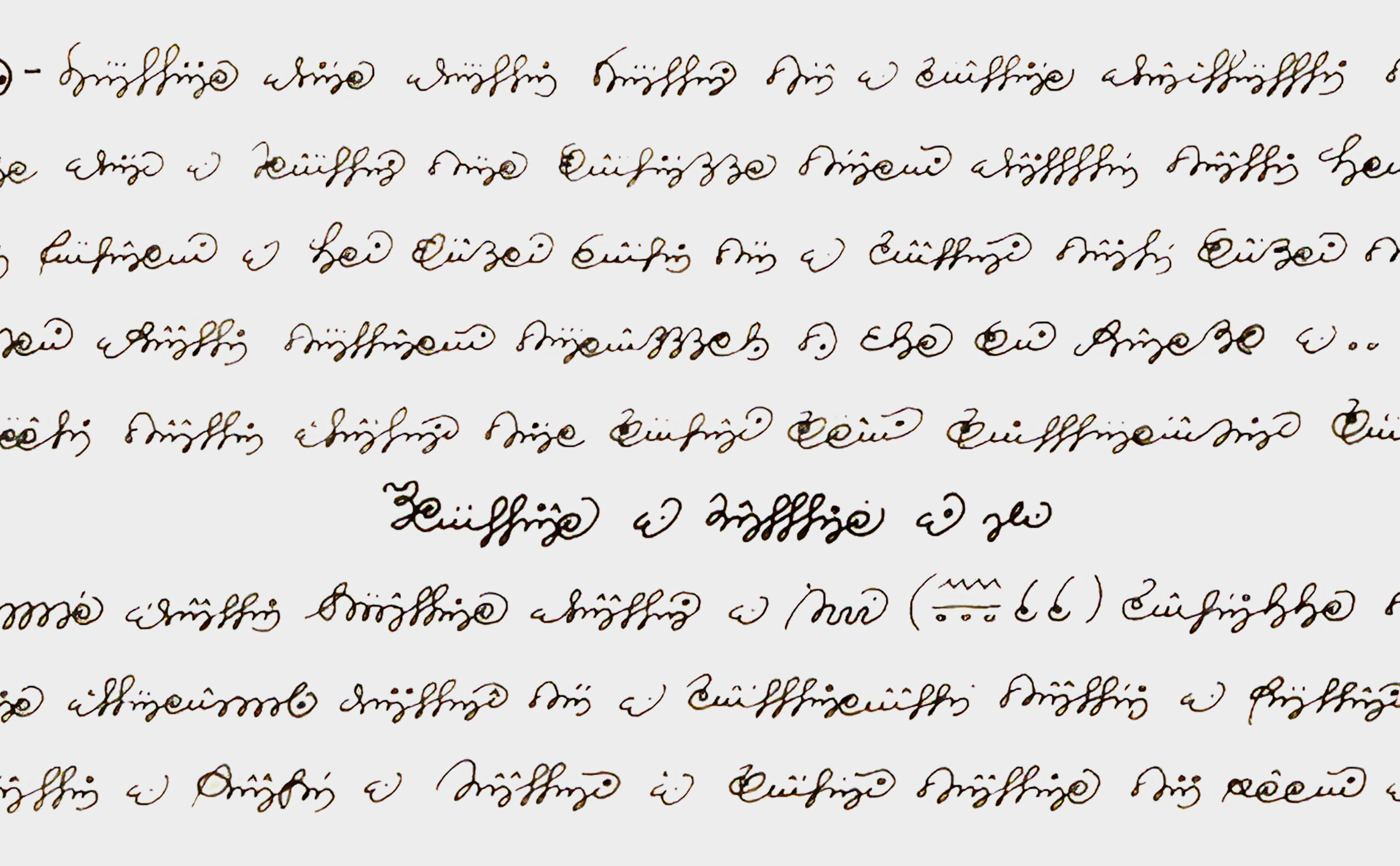 Does the mystery come from the quirky illustrations or the perfect creative coding? Artists have pondered on the illustrations, philosophers have put their heads together to try and solve the riddle of its deeper meaning, and a few diehard linguists or mathematicians have tried (in vain) to decipher the text. The only certitude is that science fiction fans are perfectly mad about him!

But all the ingredients of the mystery are before our very eyes! 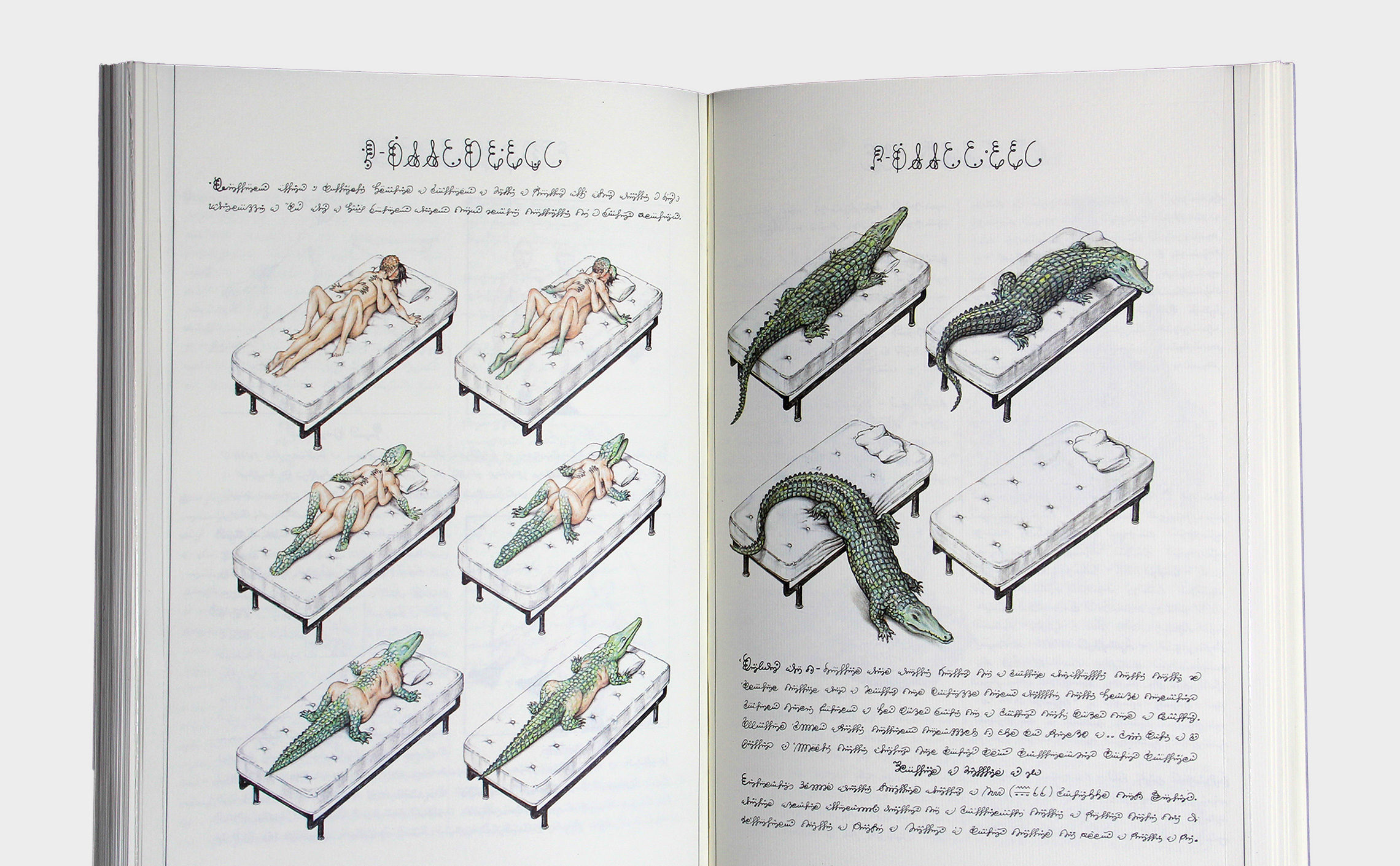 The 1991 edition, for example, shows a couple getting together and transforming into a crocodile. Didn’t Shakespeare once describe the carnal union - sex - as a “the beast with two backs”? 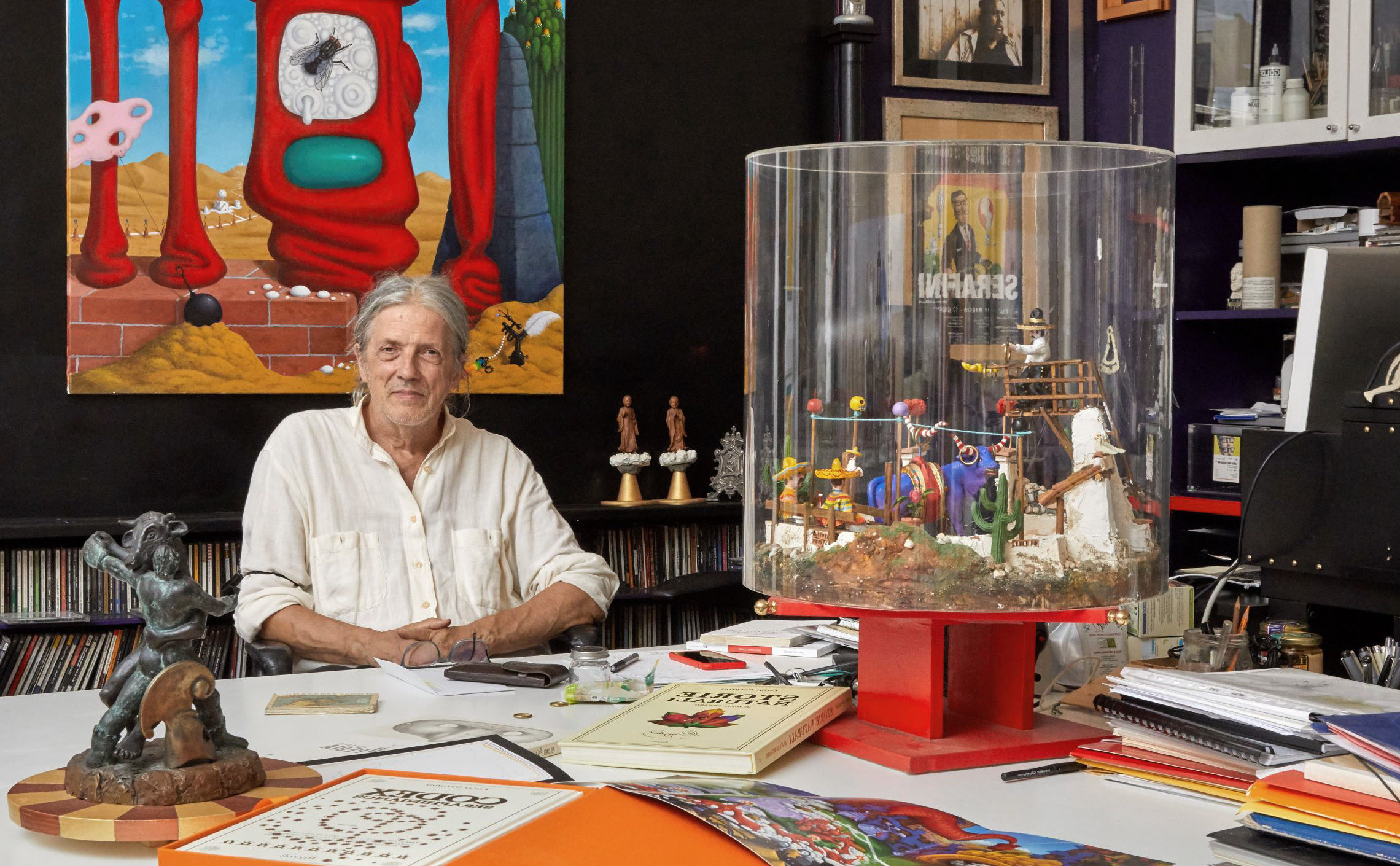 Luigi Serafini, who are you?

He’s an Italian, born in 1949, a trained architect who circumnavigated all modes of expression: drawing, sculpture, painting, and perhaps even writing… But are we any closer to actually understanding him?

There is very little available information about him. Some of the ins and outs of his background, though, can be found in an article on the Wired Italy website.

Throughout his life he came across several prominent actors in the international field of culture. Just as this book was being published, Roland Barthes offered to write the foreword, but after his premature death, his far-from-fall-back-option was none other than Italo Calvino. Fellini was also an admirer of the author’s mysterious text and he asked him to design a brochure for his latest film “The Voice of the Moon”.

Luigi Serafini belongs to a generation which, following the horrors of the Second World War and rejecting the actions of their parents, had a strong urge to learn. Before creating Codex, he travelled across America by a way of his network of friends, dipping into the counterculture that Kerouac depicts so well.

From then onwards, it is said he must have embarked on a period of drug-taking to come up with such a weird piece of work. He openly admits to having taken mescaline, a hallucinogenic drug, highly practical to stretch creative horizons. At that time, American legislation tolerated its religious use by certain Indian communities. When he tried it for work purposes, it failed to bear much fruit: “under its effects, you are completely blind, you think you’re making works of art, but when you become sober again you find out that it’s just mediocre.” This experience of mescaline was important but not very useful in terms of production. Creativity is a daily exercise which is also based on the all the little things: a play on words, for sure, but we need to be there with all our head, no shortcuts taken!

The work on Codex took almost four years. During that time, he did other things to earn a living, particularly architectural drawings, which was his initial training.

What is a codex? 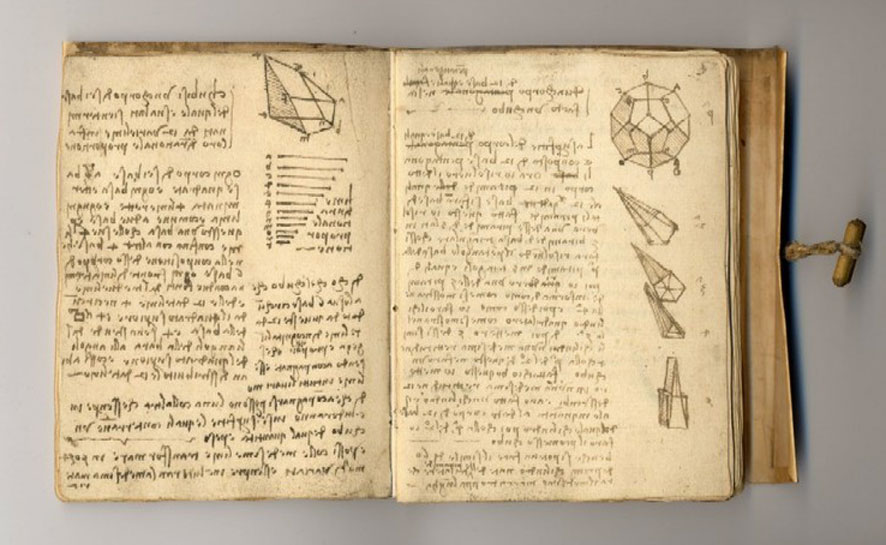 Here’s a little bit of history. Before codex, there were many tools around for writing – clay tablets, papyrus, marble, and the classic volumen roll which existed up until the Middle Ages, consisting of a roll of papyrus or sheepskin rolled between two wooden strips. But from the third century onwards, codex appeared.

Codex is a Latin name which designates a book made up of sheets of paper folded and put together in the form of notebooks, bound the way we can see today. It’s from the word caudex which refers to the wood element in tree trunks or stumps. Later, the term was used for books made of papyrus or parchment with the same format. The codex could thus fit more texts inside it than an antique volumen roll, which became less and less used. This mutation, which shook the habits of reading and writing, was to take several centuries.
The codex flourished in the 4th century in the Latin-speaking Western hemisphere, and in the 5th century in the Byzantine Empire.

The main evolution introduced by codex was the notion of the page. Its adoption by Christianity was all the more meaningful as the Bible took on its format, thus enabling it to differentiate itself from the rolls the Jewish used for writing the Torah. Further afield, the term codex was being used for naming laws (Codex Theodosianus), hence the name ‘code’ used today – the highway codex, the civil codex…

As well as the story of the codex’s origins, there is another to be found in the 18th century that is of interest. During that era, the word codex was used for pharmaceutical formula approved by the Faculty of Medicine. In other words, it’s a book containing all possible secrets… a precious and mysterious book… much like the Codex Seraphinianus! 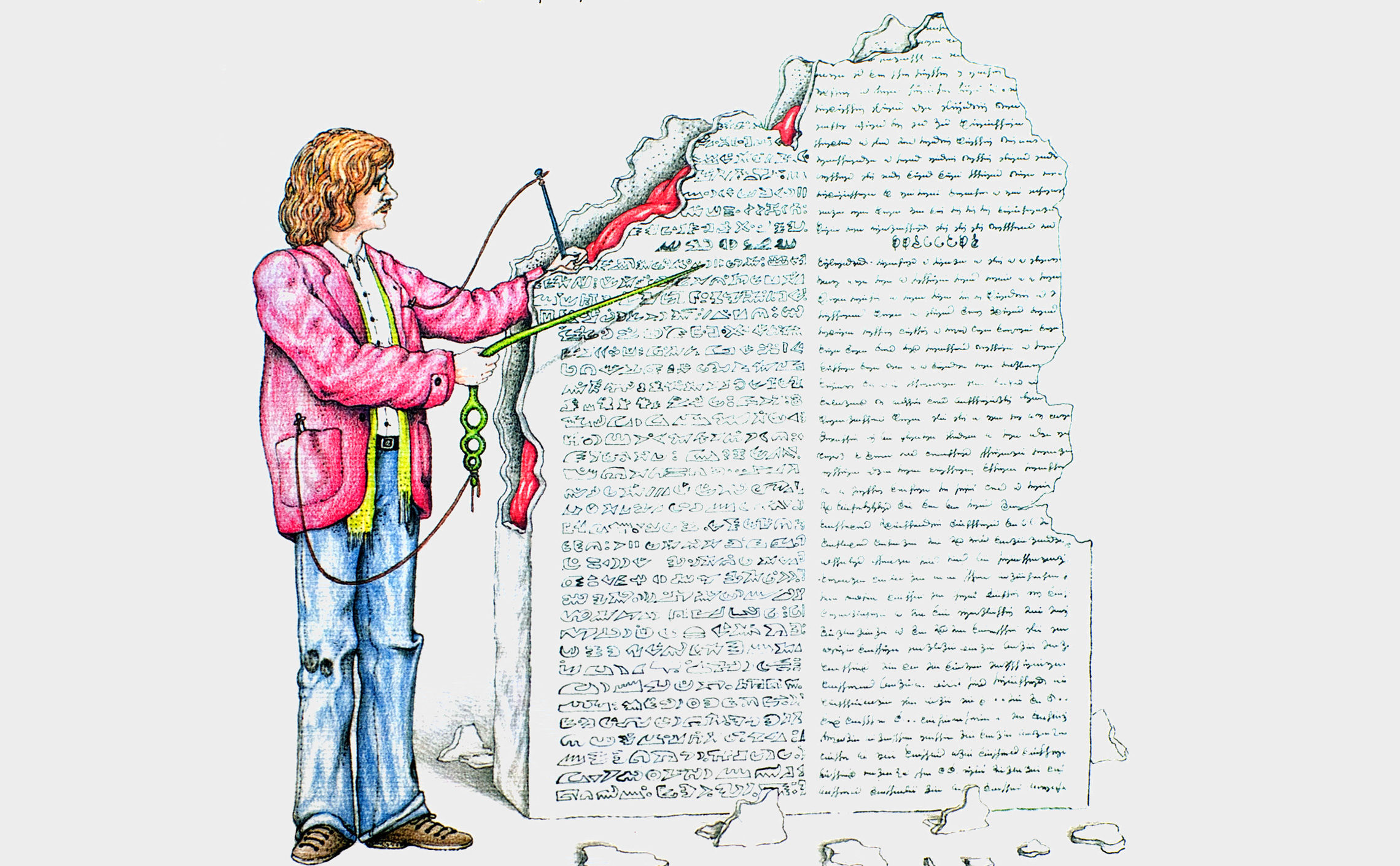 In the chapter which presents writing and speaking, a Rosetta stone can be found. It doesn’t index Greek, popular language, or hieroglyphs, but features two imaginary languages – that of Codex Seraphinianus and a new one invented by Luigi Serafini. And yet, despite the homogeneity of the book, Luigi Serafini left a ponderable breach in two adjoining pages of the book, perhaps a key to understand his intentions. It’s of a man lying down whose pot of ink has let words escape, not in the original language of the author, but in French. “Orgiastic girl, it says, “out of the divine nowhere, on the first day on the promenade in Balbec.” Lovers of Proust would no doubt have recognised the description of Albertine here (Albertine Gone). Yet the text which describes the two scenes is written in the same imaginary alphabet as elsewhere in the book. This is the only exception in the whole of Codex. This meaning behind the scripture in question, though, will probably be beyond most of us – it was for me! 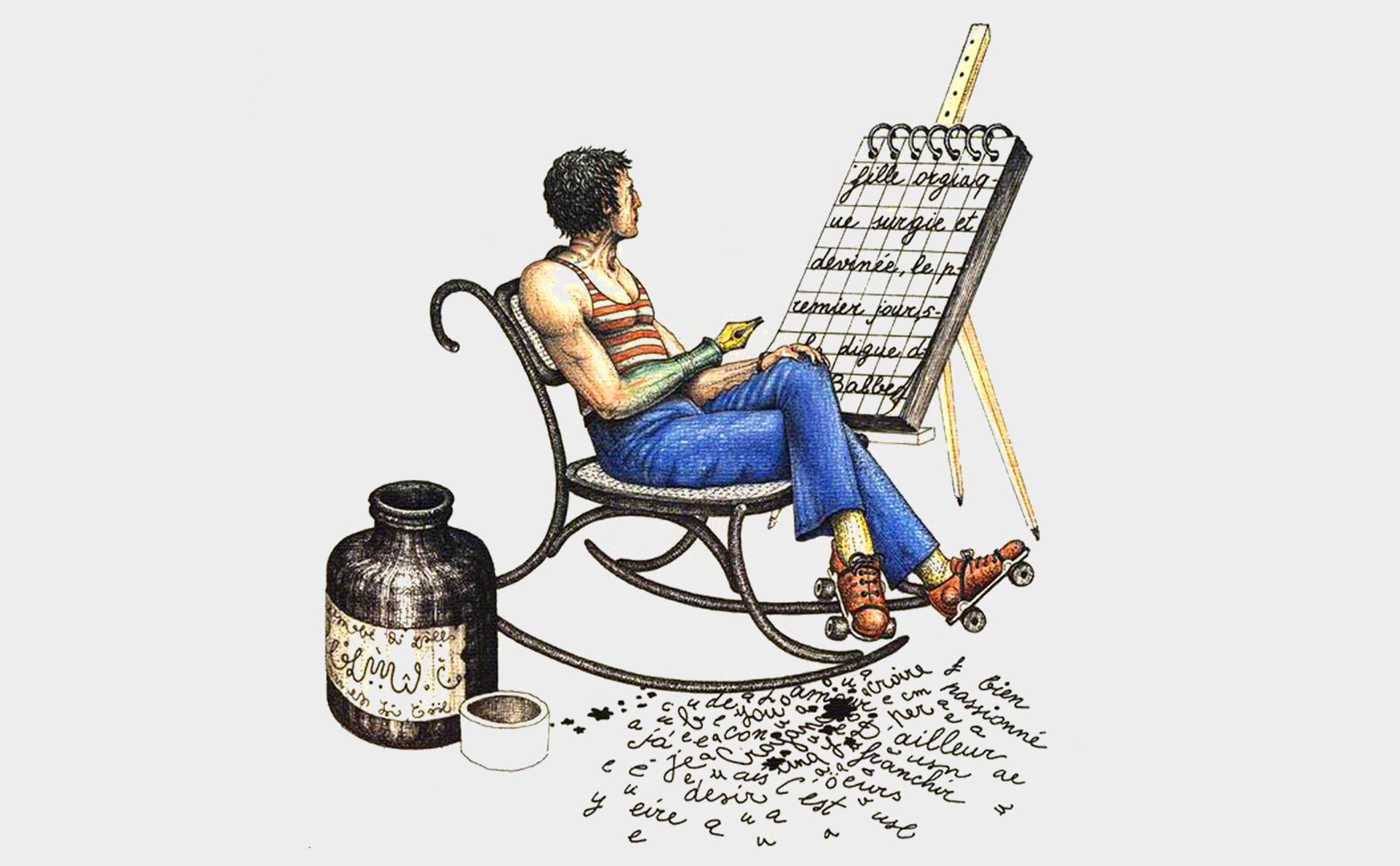 No-one (apart from Serafini I imagine) knows what this text means, and the author keeps schtum. In 2009 he explains at a conference: “this book gives you the feeling of illiteracy, which in its own way, encourages the imagination, much like children who delight in inventing a story by holding a book upside down. They can’t read yet, but they know that the object must make sense and so they imagine what its meaning could be.”

All this doesn’t prevent certain incorrigible crazies, madder even than Luigi himself, from trying to break the code. A Bulgarian linguist, Ivan Derzhanski, for example, solved the riddle of numbering a few years ago. As for the writing, M. Derzhanski declares “this writing is made up of tens of different shapes, too many for the alphabetical writing system, and there are too many long words for it to be syllabic. Certain shapes crop up several times, some only once or twice.”

Another madman, James M. Duyer, says he has solved the mystery of Codex. But I have to admit I haven’t studied advanced linguistics and mathematics enough to be able to follow his reasoning! This is what it looks like: 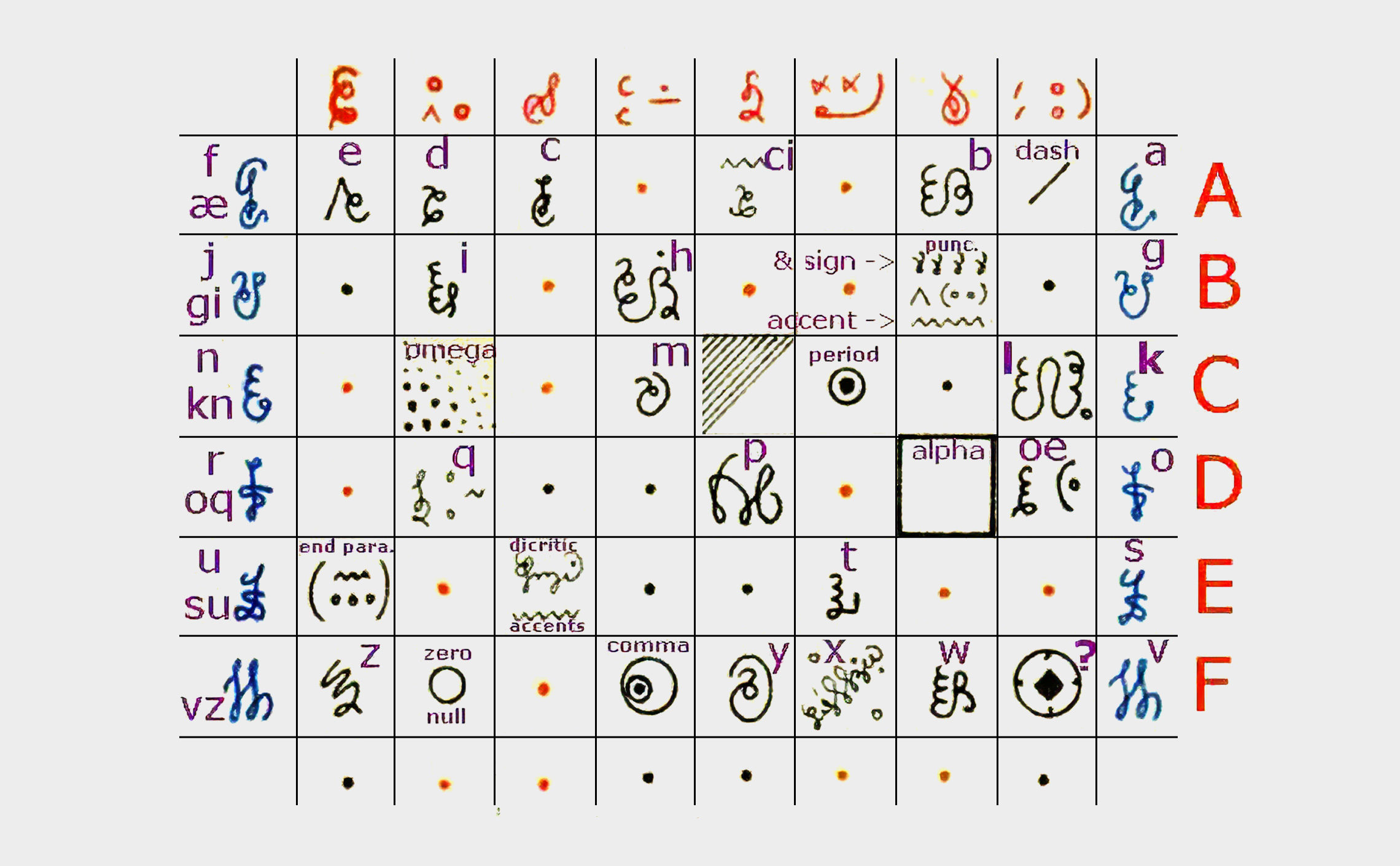 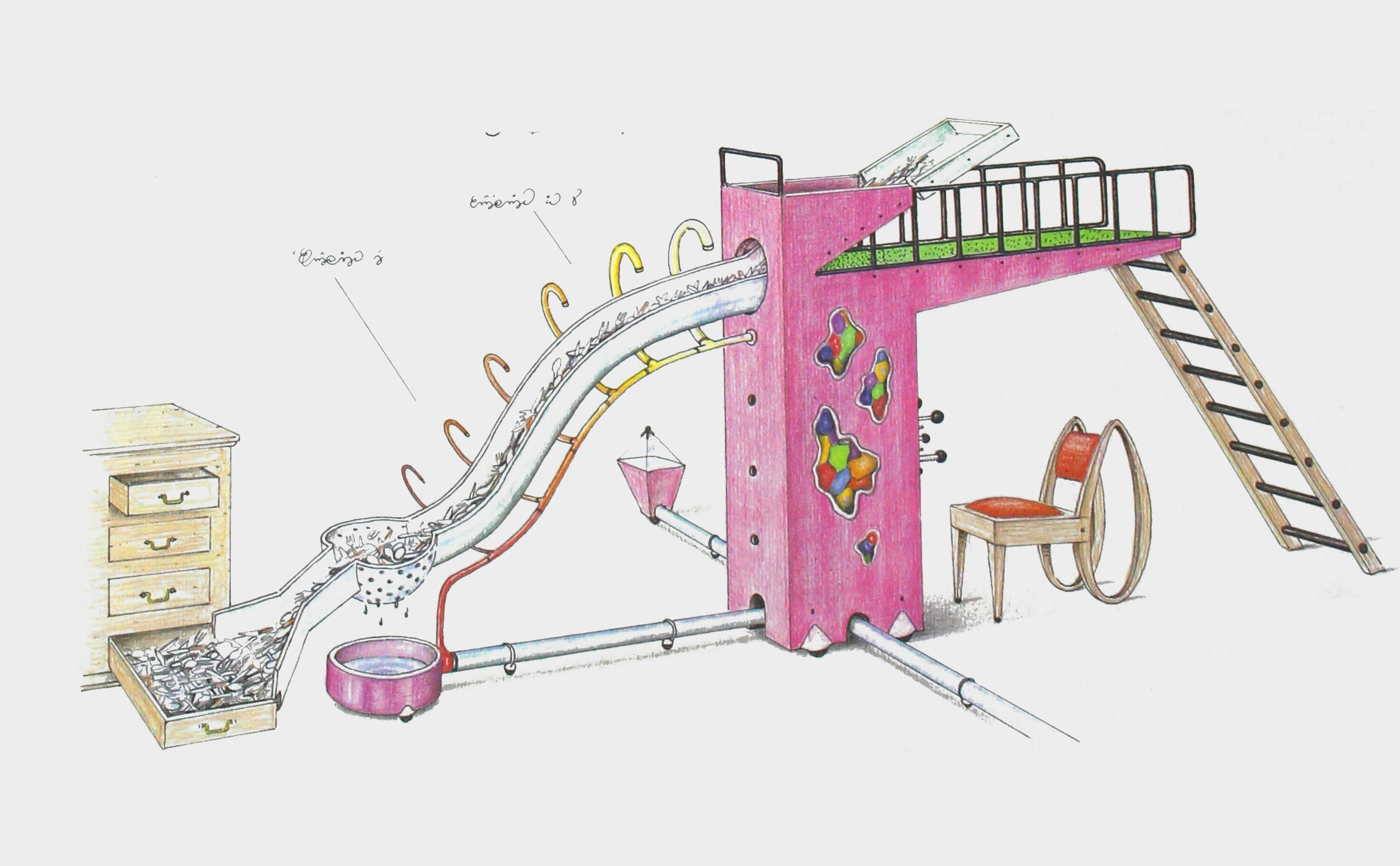 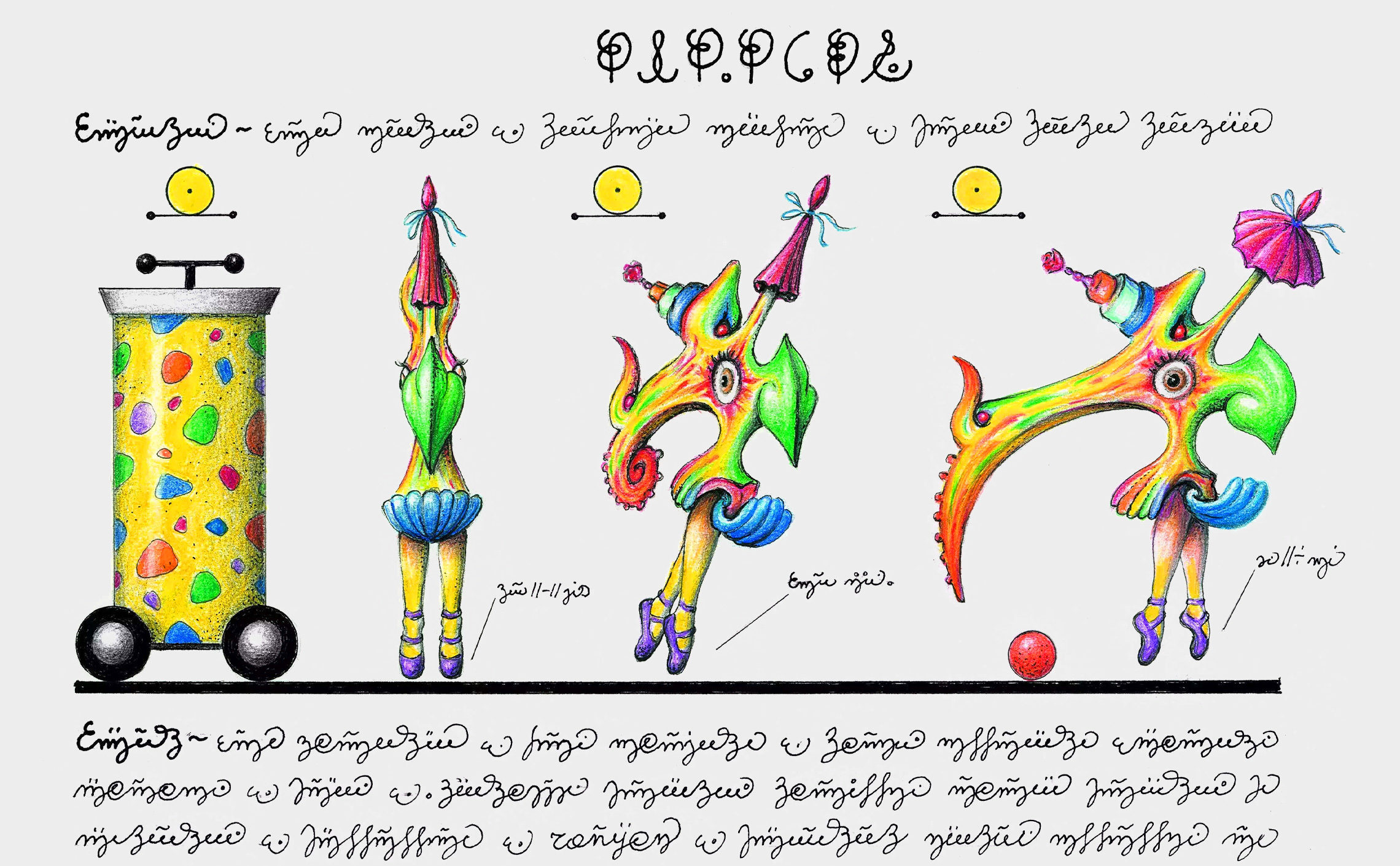 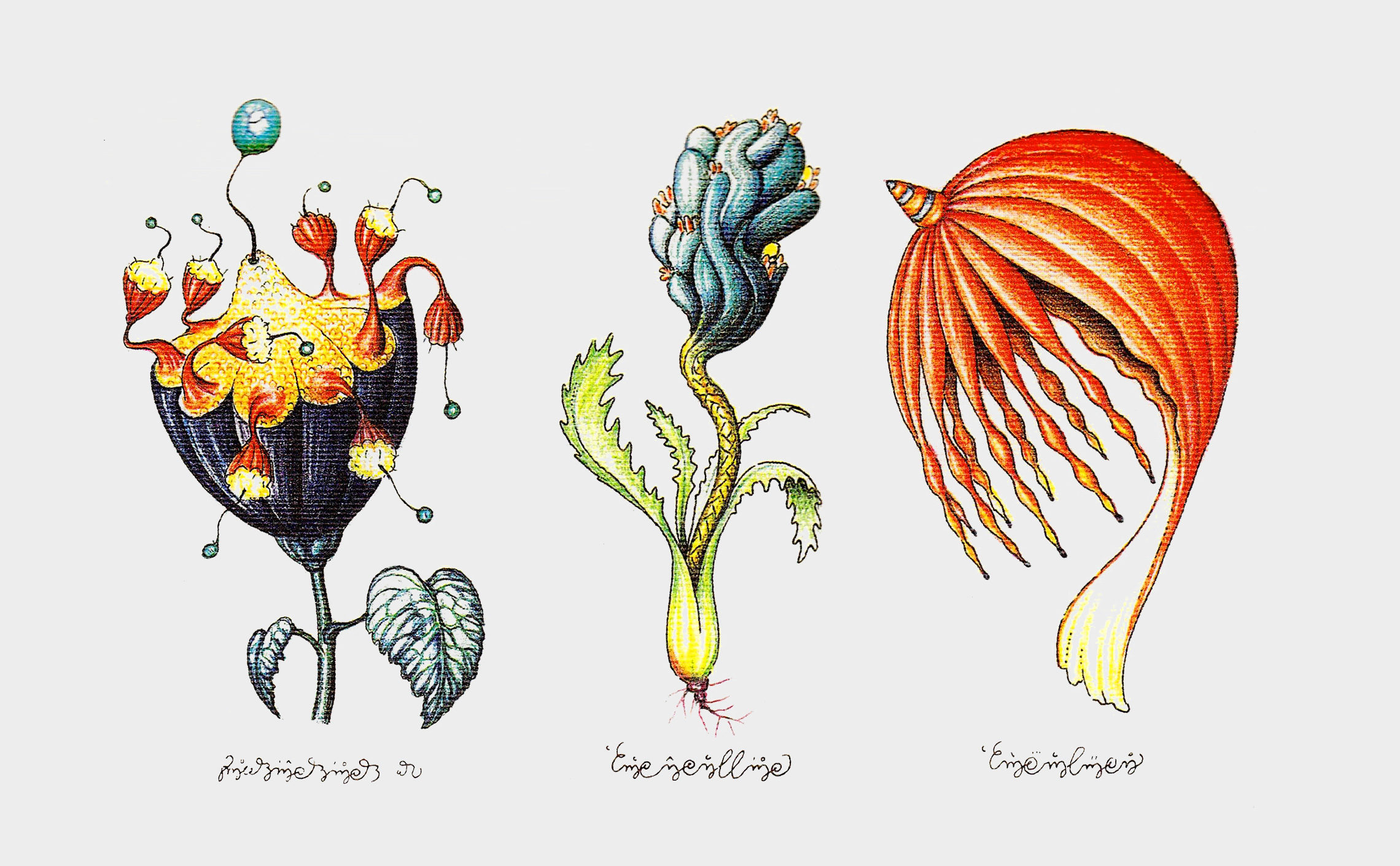 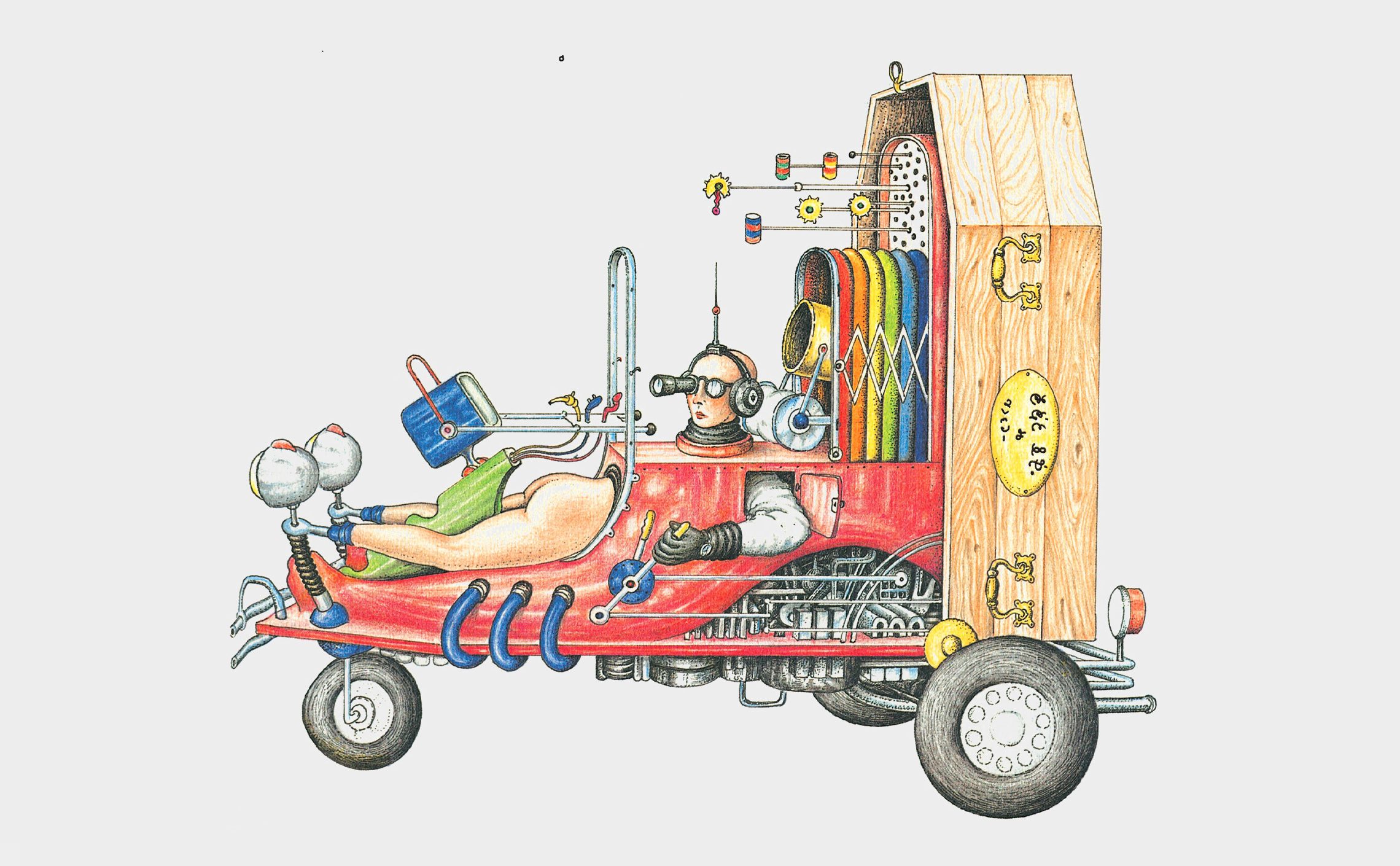 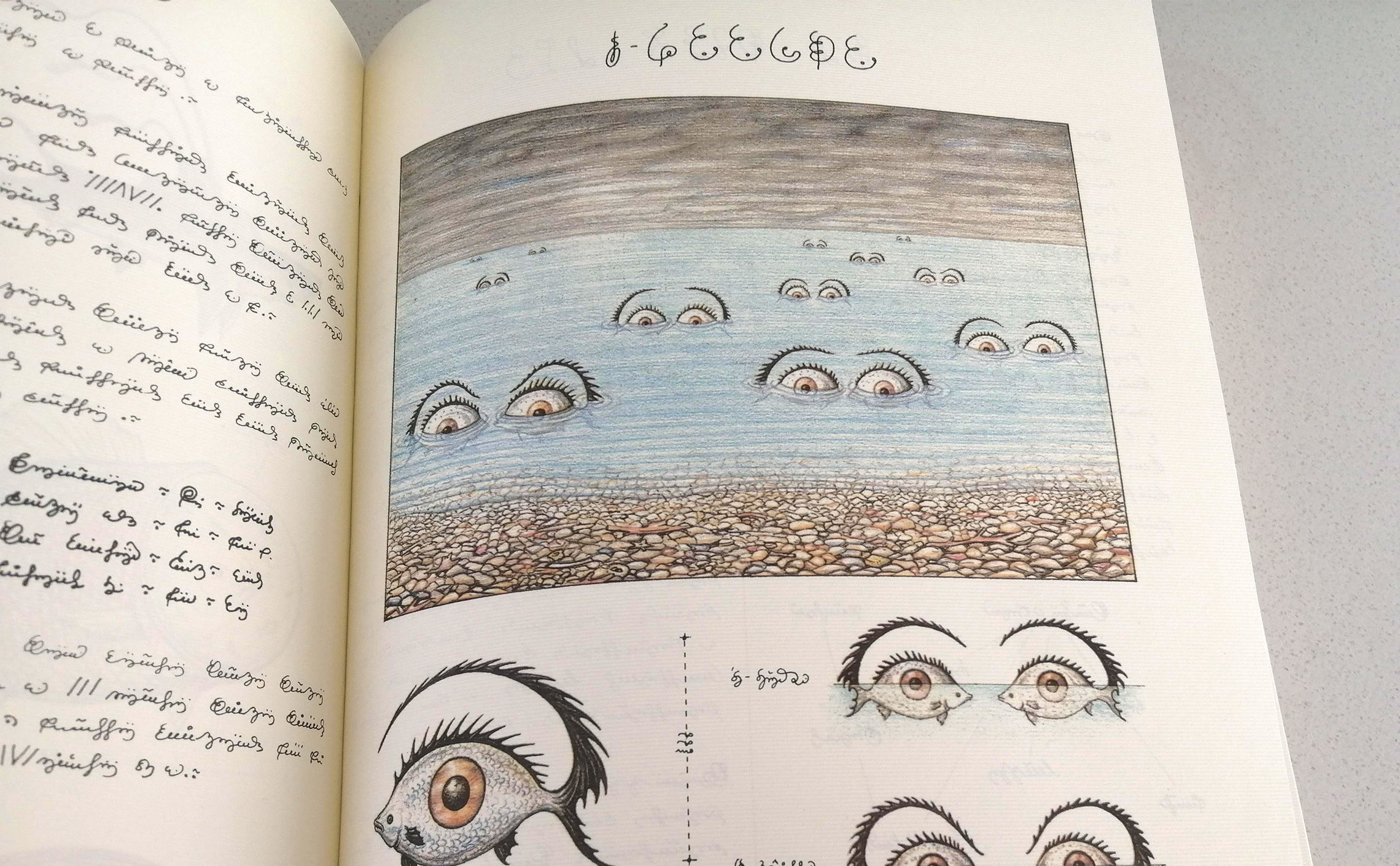 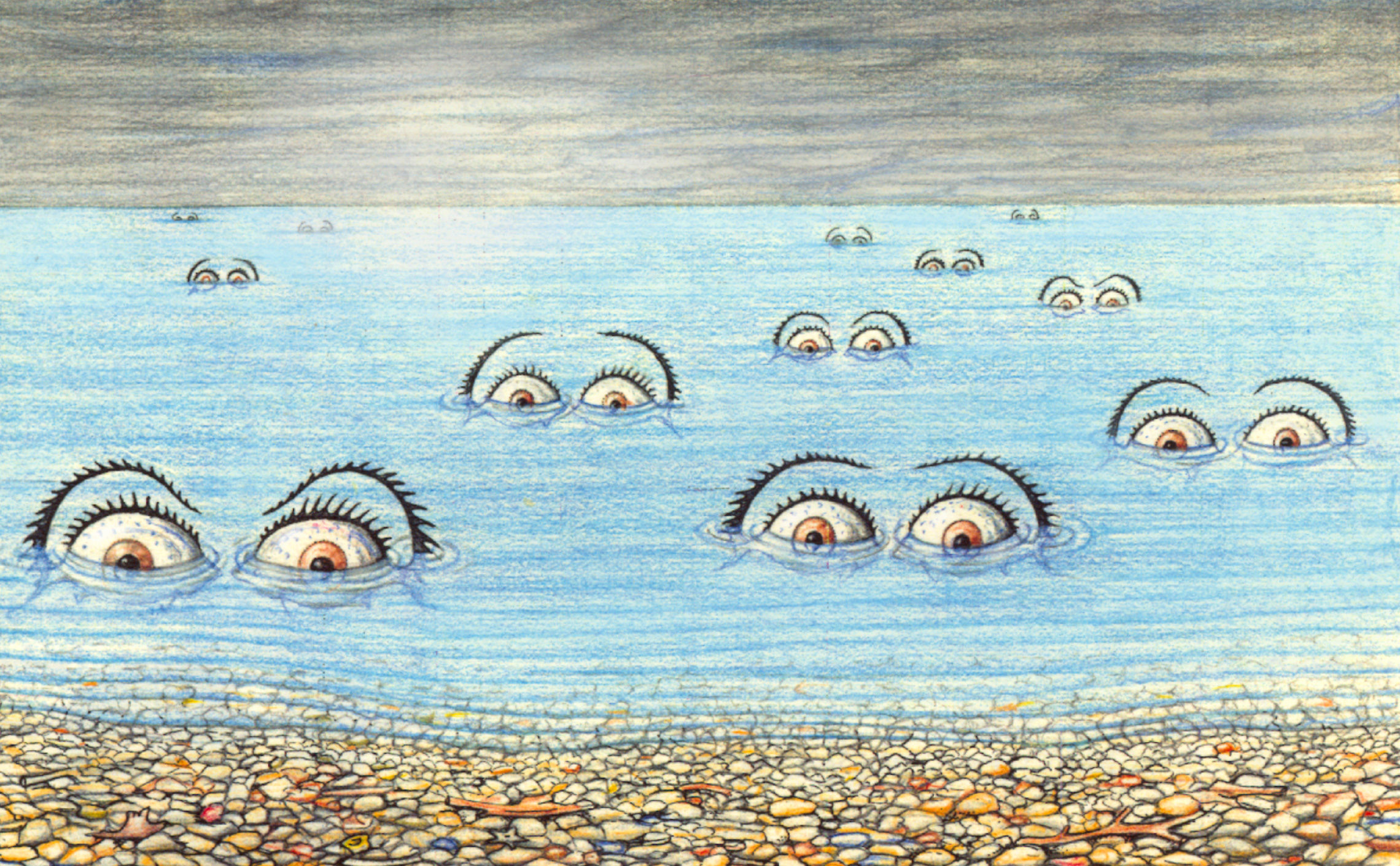 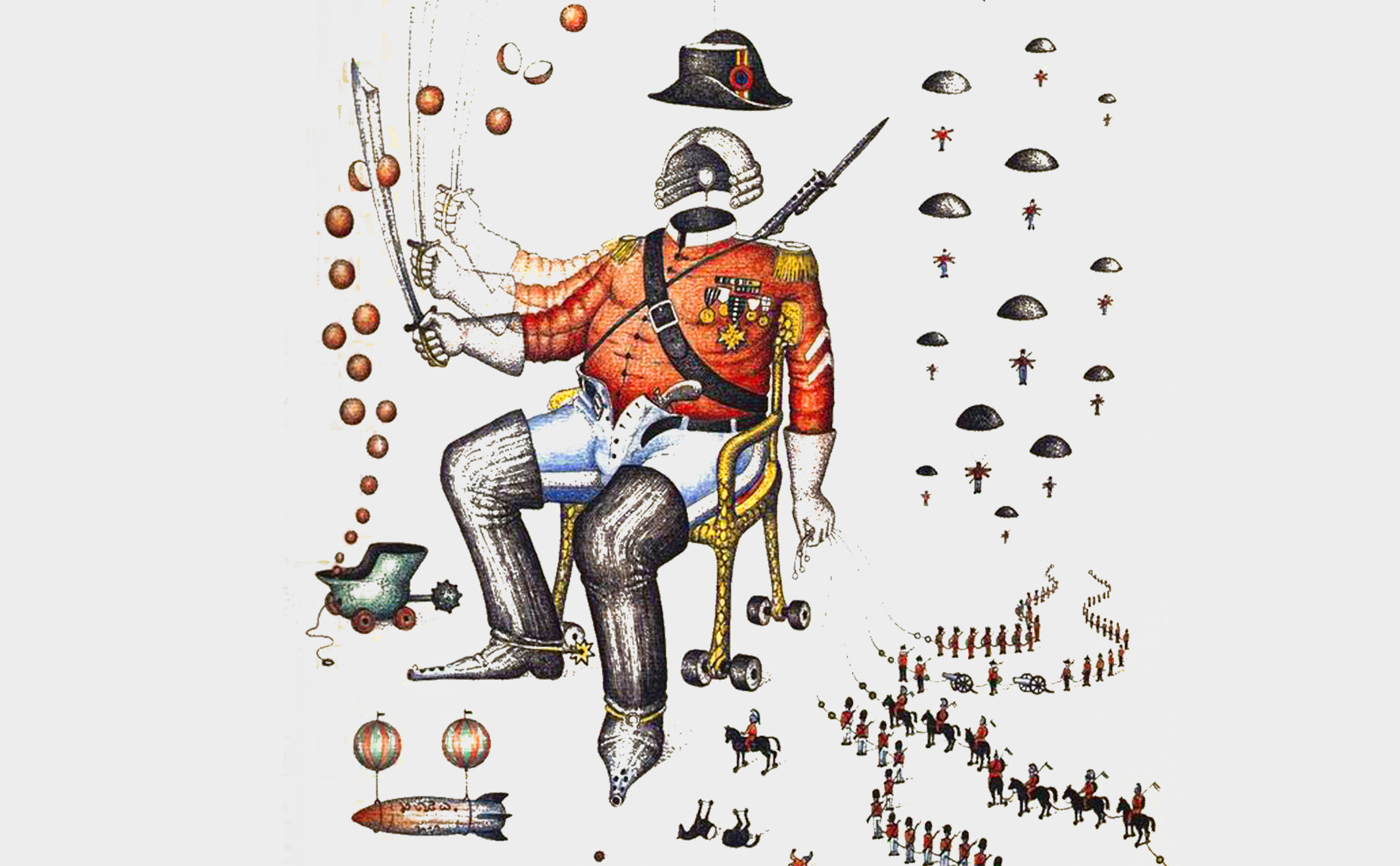 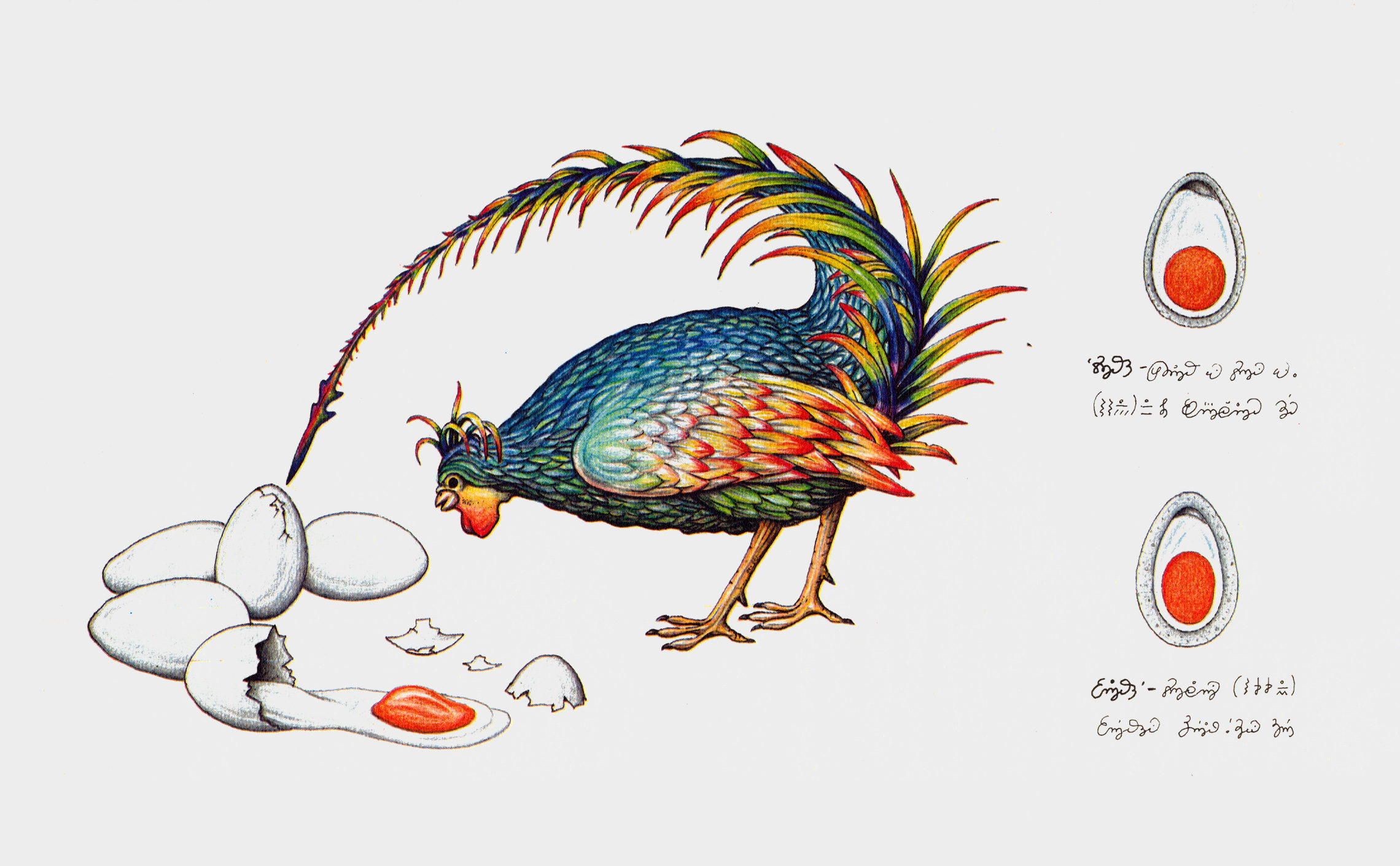 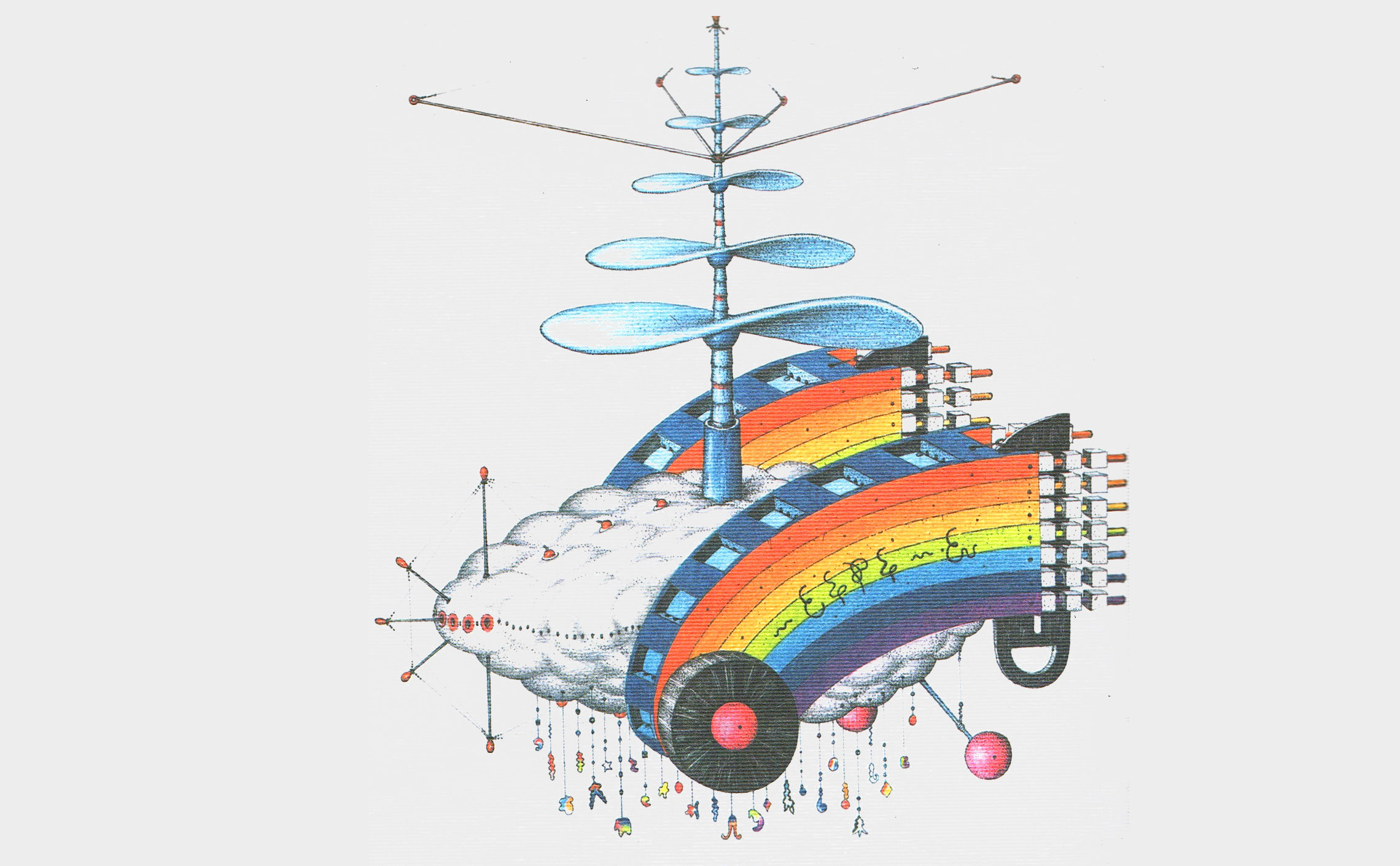 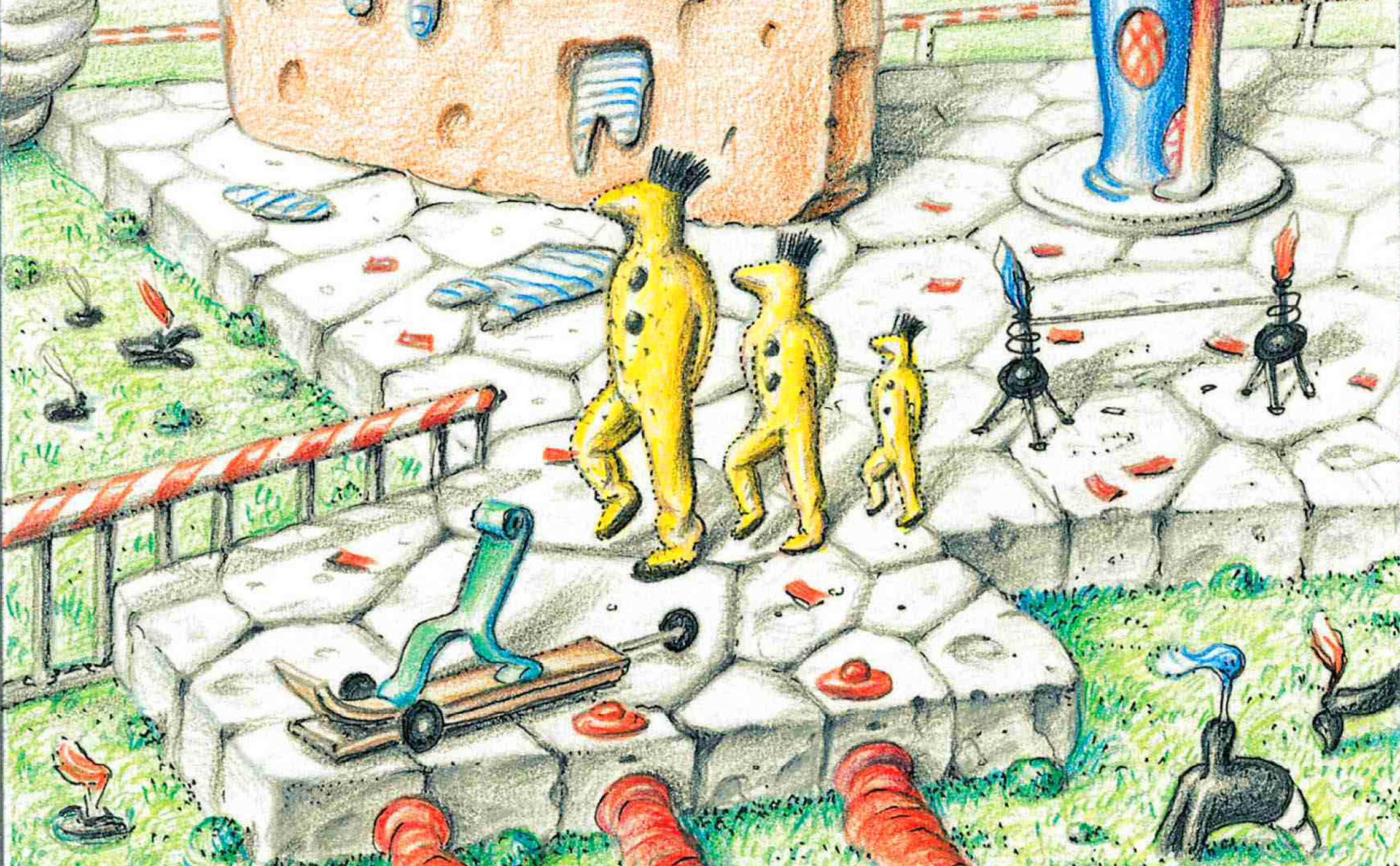 This publication, albeit more than thirty years old, has inspired and continues to inspire a number of creators. For example, the choreographer Philipe Découflé was inspired to create his trilogy, Codex, Decodex, Tricodex, putting into dance the madnesss of Serafini!

For you to paint a picture yourself!

Here is a complete version available on Issuu.
Happy diving into a world of folly! 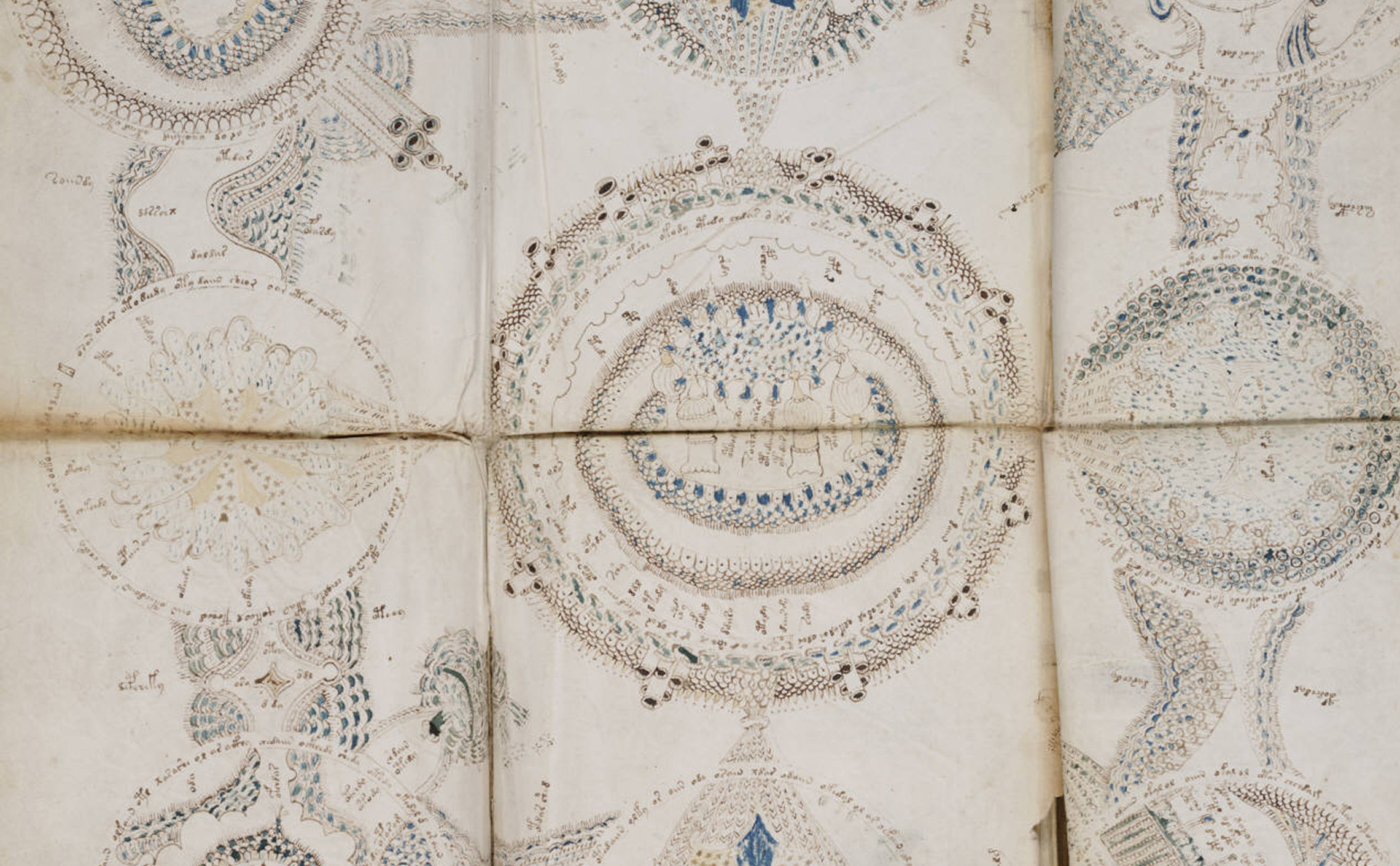 It is impossible to talk about the Codex Seraphinianus without mentioning the Voynich manuscript. 600 years old, this manuscript remained until then one of the greatest mysteries of cryptology. It would have been written in Central Europe in the 1500's in an indecipherable handwriting, and this in spite of the numerous attempts of cryptographers. The exact nature of this document, its destination and its author remain an enigma: perhaps it is a herbarium, an alchemical treatise, an esoteric work, or even simply a mystification? This ambiguity has contributed to its legend.

It seems that its mystery is in the process of being solved by using artificial intelligence. We invite you to read this fascinating article: https://www.nationalgeographic.fr/sciences/le-mysterieux-manuscrit-de-voynich-aurait-il-ete-decrypte 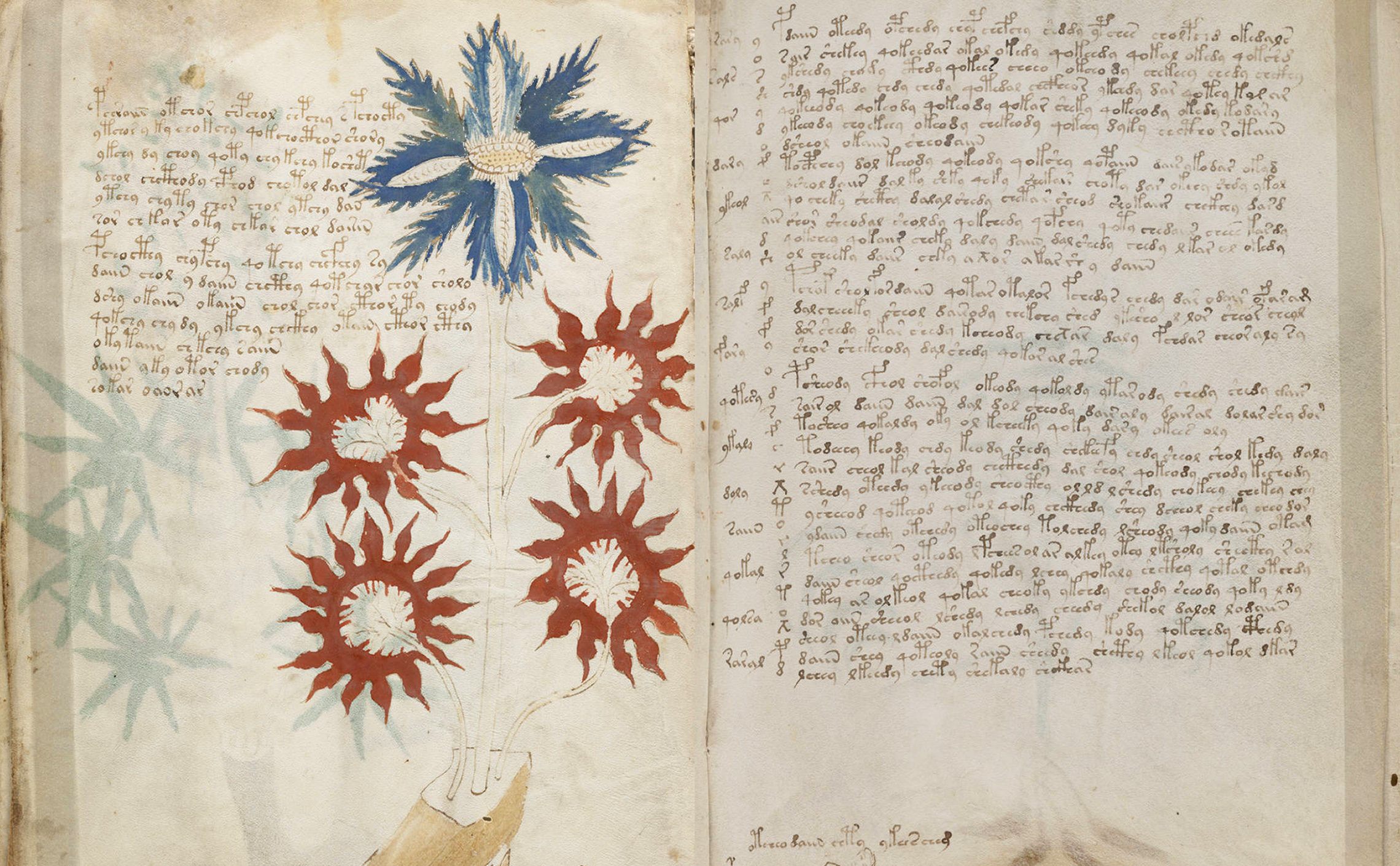 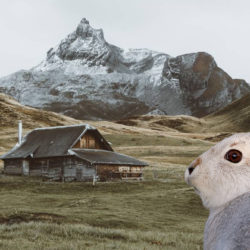