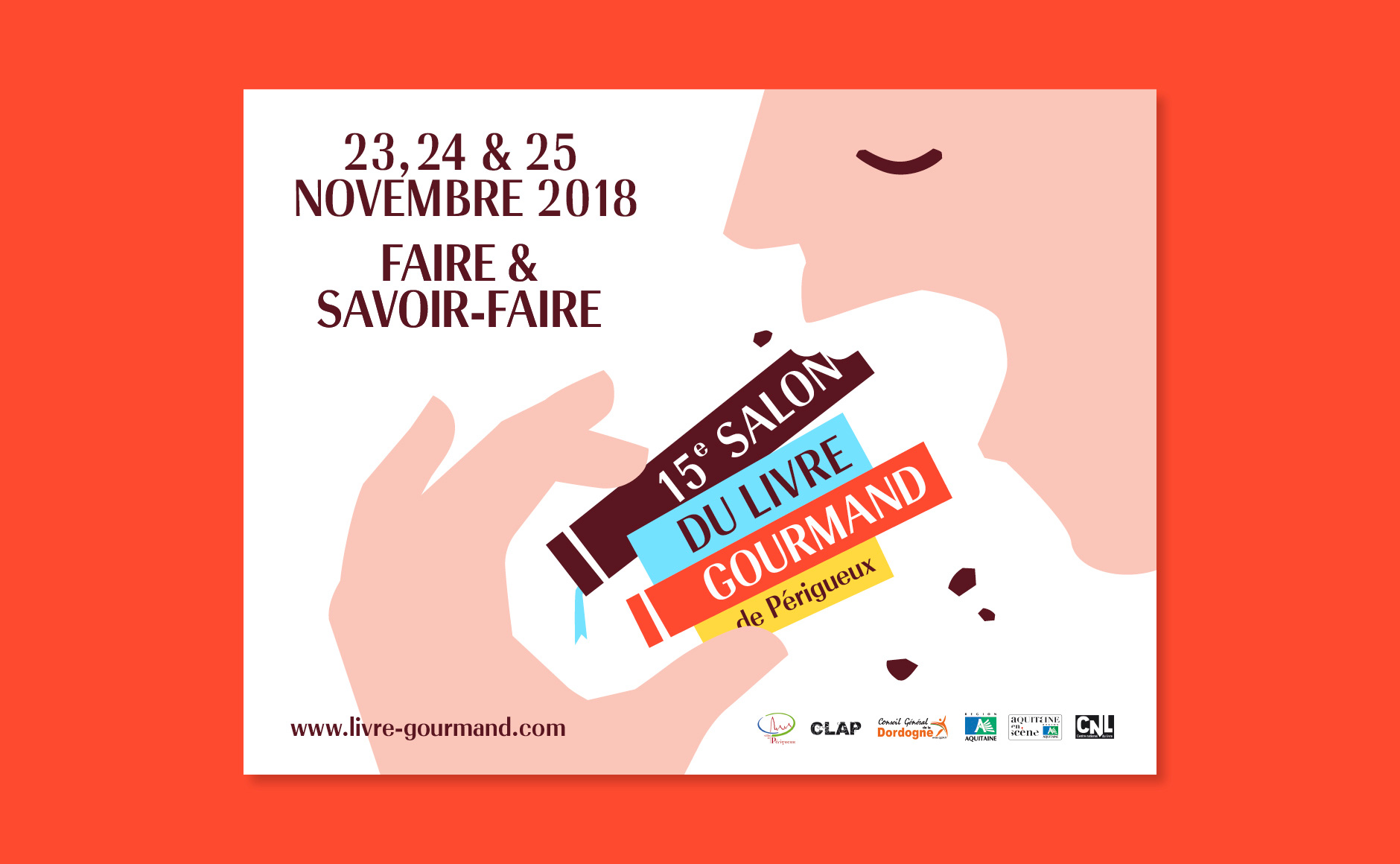 Here is the poster we made for the 2018 edition of the Salon du Livre Gourmand de Périgueux (Périgueux Gourmet book Fair).

For 15 years, the Périgord city has hosted the fair in the heart of the historic centre. The history of Périgueux, like that of the Périgord, a region known for its gastronomy, conveys an image of art of living and culture, giving pride of place to the written word. Indeed, even before Bordeaux, it was the first city in Aquitaine to have printed a book at the end of the 15th century.

The Salon du Livre Gourmand de Périgueux has a double vocation: a passion for words and a passion for food. It is an opportunity to celebrate gastronomy from all over the world around various events: tastings, dedications, conferences, demonstrations by great chefs... This event highlights the know-how by welcoming the greatest men of letters and mouths: Ducasse, Bocuse, Troisgros, Hermé... In figures, it is 20 000 visitors over 3 days, a hundred authors, more than 5000 books and 200 events.

The Salon du Livre Gourmand de Périgueux will take place from 23 to 25 November.... For those who want to fill their library shelves and stomachs!

On the theme of this 15th edition, "Faire & Savoir-faire" (to do & to have knowhow), we have created an illustration featuring a "bibliophage": "the one who eats books" (from the ancient Greek φάγος, phágos, "eater"). A colourful, playful and gourmet proposal, whose illustrative style and solid colours offer a contemporary vision of the event. 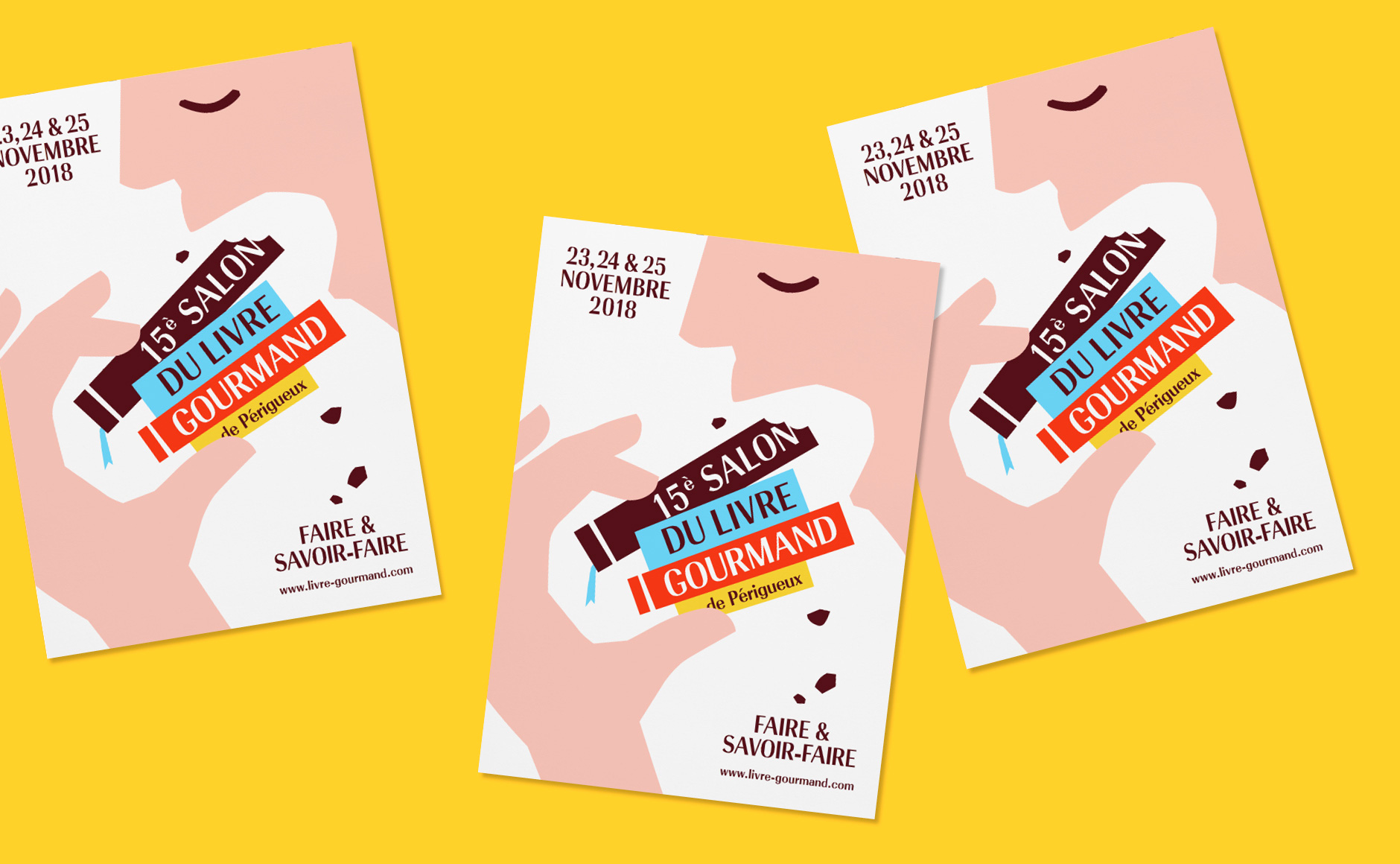 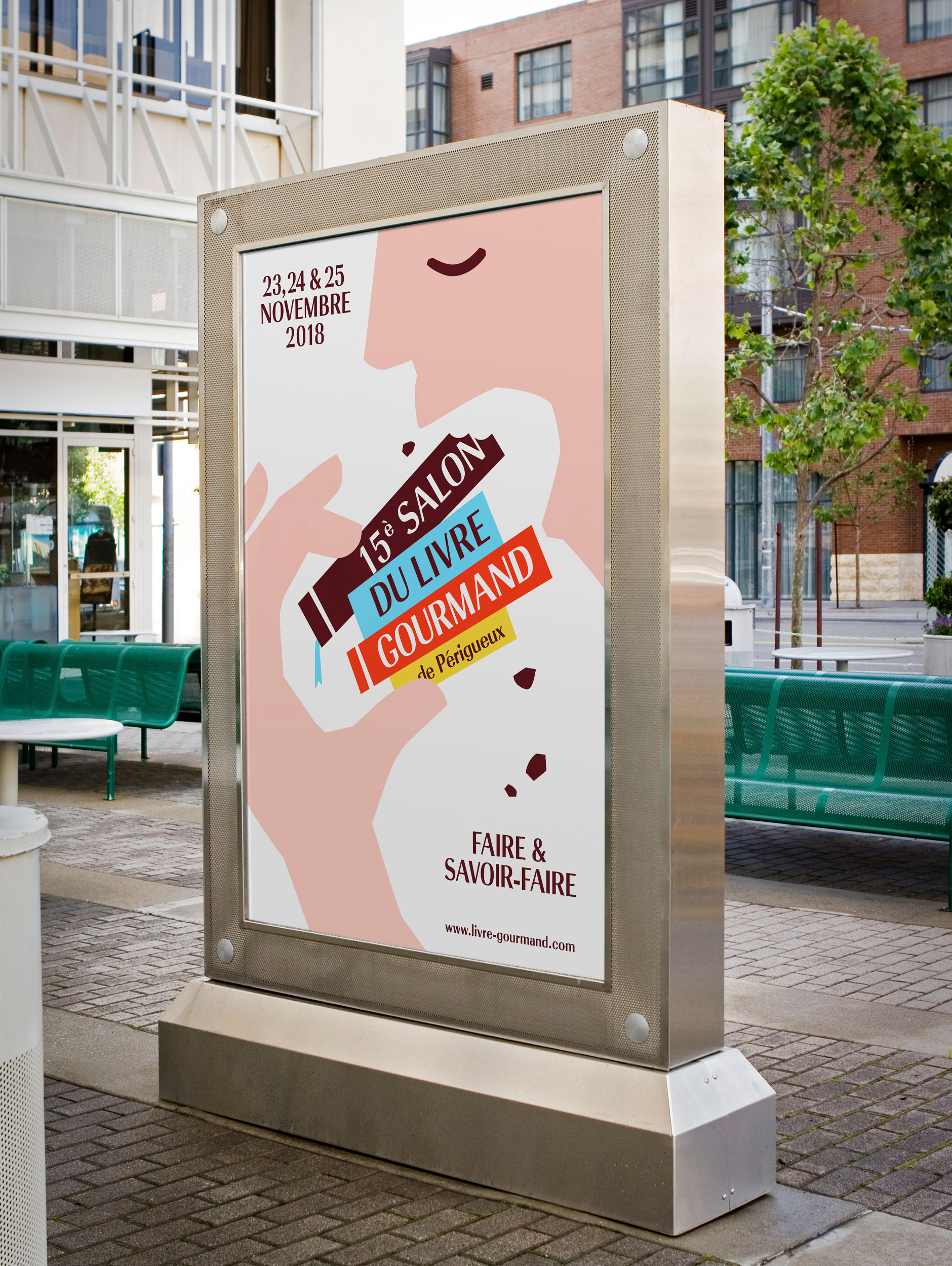 A good slice of reading!

This other proposal features a gastronome working on cutting a dish.... This visual places more emphasis on the "do" and adds a human dimension by the presence of a chef. 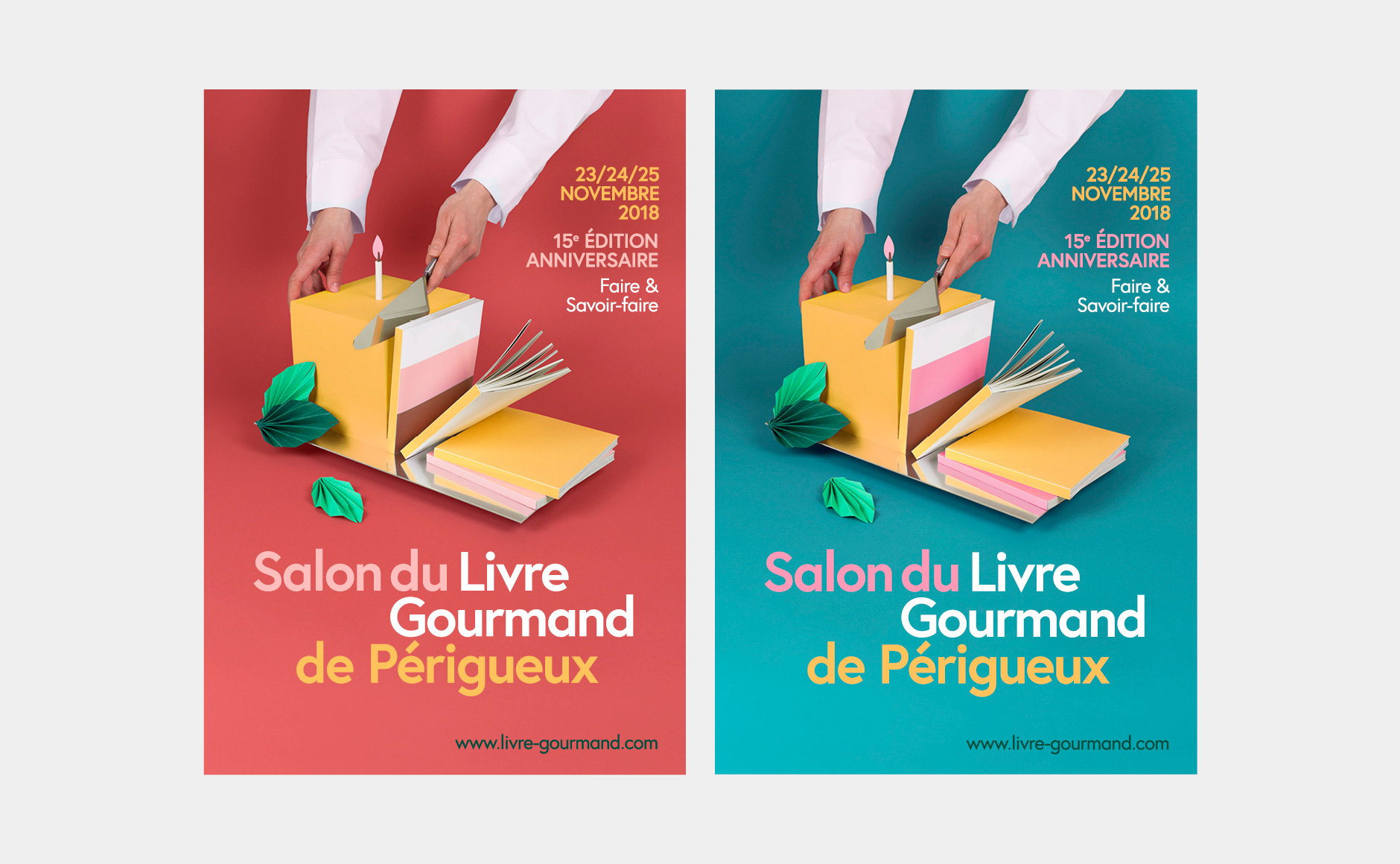 Fusion cuisine
This proposal illustrates the poetic idea of the fusion between the cookbook and the culinary ingredient. This concept also corresponds very well to the theme "Faire & Savoir-faire". One could have imagined this idea executed in illustration in a simple, colorful and joyful style, like "Matisse"; or in photography, with the hand, the book and the pot in real objects. Contemporary typographical treatment is an integral part of the composition, giving it originality. 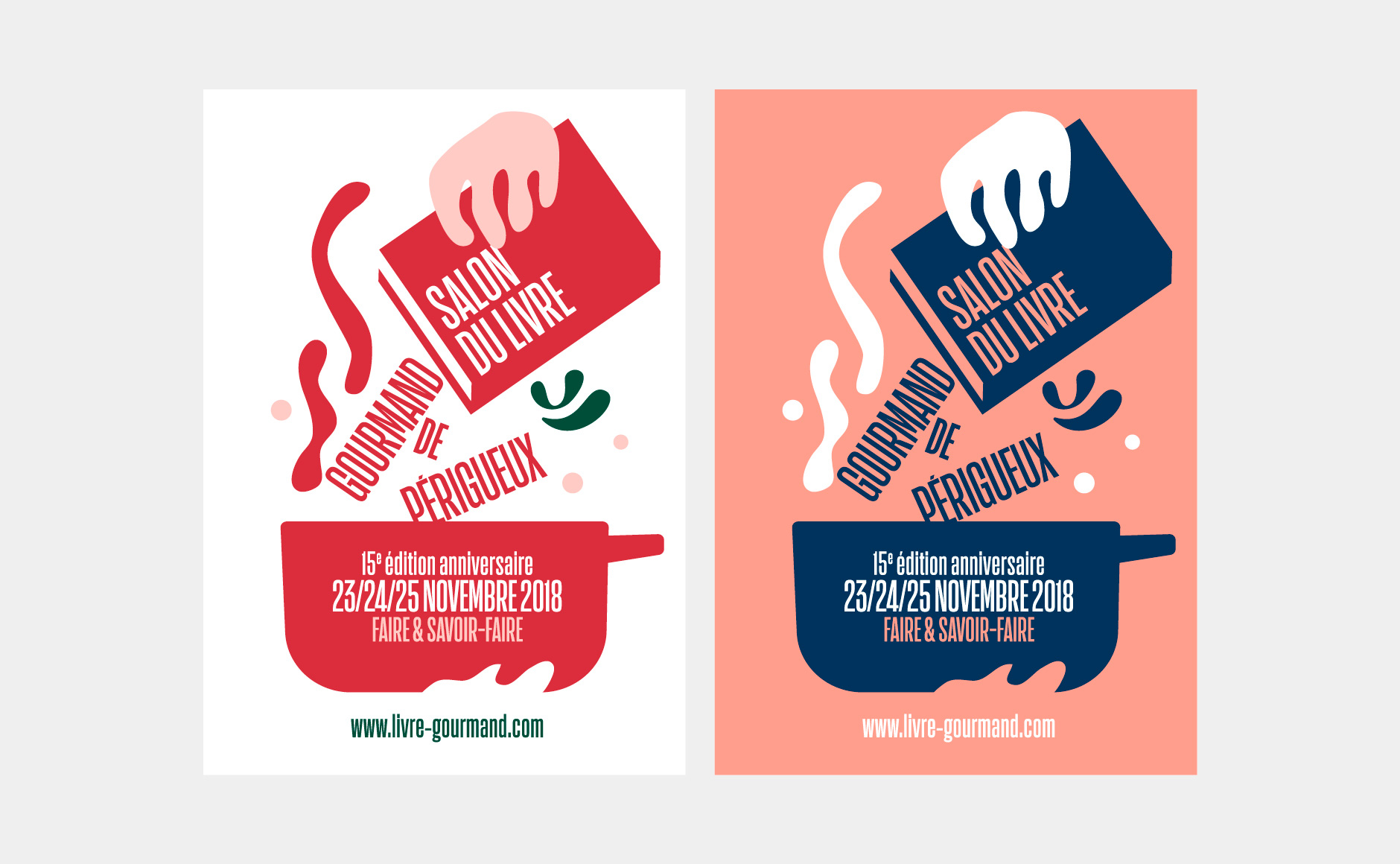 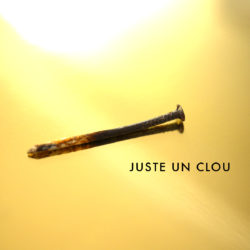 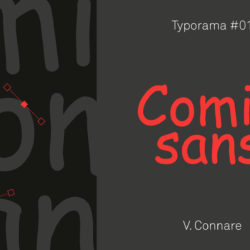