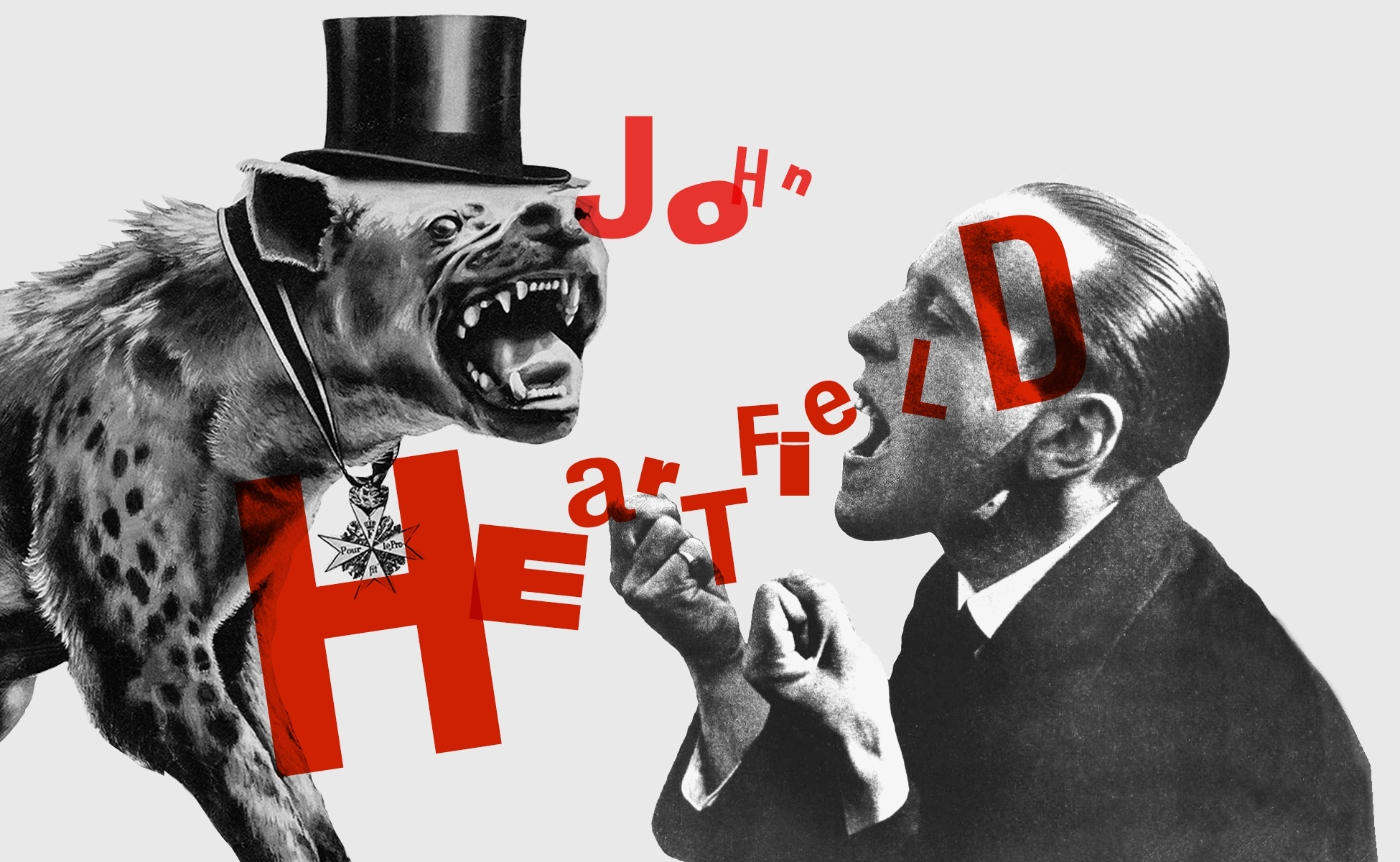 John Heartfield, whose real name was Helmut Herzfeld (1891 - 1968), was a German "photomontage artist" who was strongly committed throughout his work. Involved in the German Communist Party and then a member of the Dada movement, he fought against Nazism and fascism with his photomontages. Aragon said of him that he was "the prototype of the anti-fascist artist".

The eldest of 4 children, his parents ( his father was a socialist writer and his mother a political activist) disappeared without a trace and in unexplained circumstances when he was 8 years old. The siblings were raised separately by other parents. Helmut Herzfeld spent his childhood in Switzerland, then in Austria. He studied advertising and graphic design in Munich for three years, practiced for a year, then moved to Berlin in 1913 just before the war, with the hope of becoming a painter. A futurist exhibition particularly influenced him: he realized that artists could take a stand through their art. The drawings of Georg Grosz, to whom he would become close, were "both a revelation and a cold shower" as his brother Wieland put it: "Until then we thought that art was what made beauty visible and audible. Grosz allowed us to stop seeing the ordinary world as dry, dull and boring, and to start seeing it as a drama in which stupidity, coarseness and laziness shared the main roles. Following this discovery, he burned everything he had done until then in ink, charcoal or pencil. Below, on the left, two paintings by George Grosz, "Suicide" in 1916 and "Grey Day" in 1921. On the right, an oil painting by Herzfeld from 1907.

A name against a statement

In 1916 Helmut Herzfeld decided to change his name, as an act of protest against the war, and against German patriotism. By becoming John Heartfield he dissociates himself from German hatred of the British and publicly expresses his support for the British in his new identity. During the First World War, the Germans wrote the sentence "May God punish England" everywhere on the French territory and in the propaganda newspapers, to sow doubt and make France, its ally, hate England. For Heartfield, this was the way to "build" a name for himself distancing himself from his family and his country of origin. Two years later, in 1918, John joined the German Communist Party.

Known for his excesses of rage which sometimes lead him to be tied to his chair by his friends after heavy evenings of drinking and drugs, Heartfield poured out his hatred on bourgeois art which he deeply despised, and on "artists" in general, by criticizing contemporary art forms, such as expressionism or later surrealism. He joined quite naturally the Dada movement in 1919, whose values and struggles he shared and even founded: Dada was a form of art-propaganda at the service of the workers' movement, and wished to achieve freedom through social revolution and the explosion of the bourgeois class. Heartfield became the fotomonteur at the 1st International Dada Fair in Berlin in 1920. 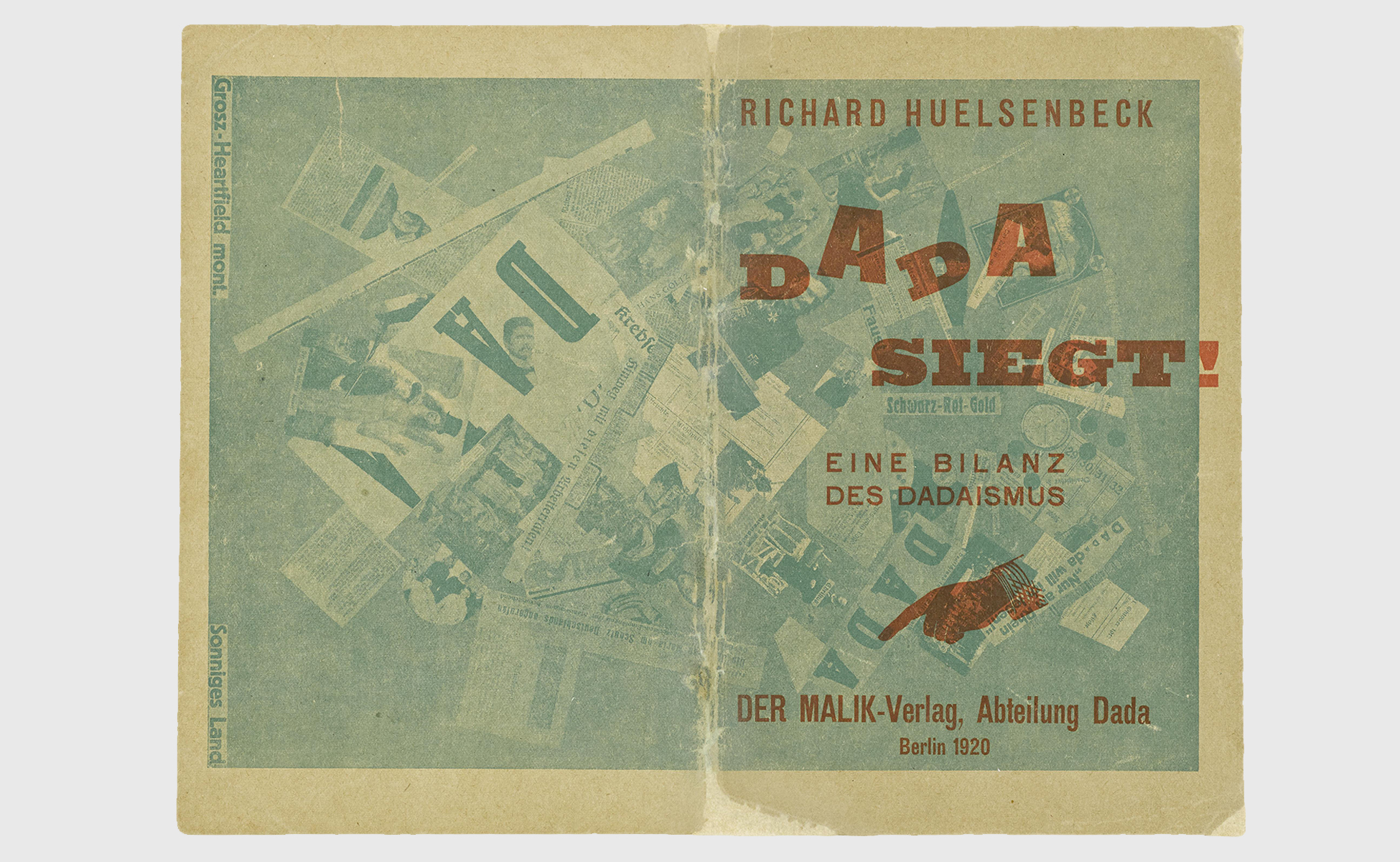 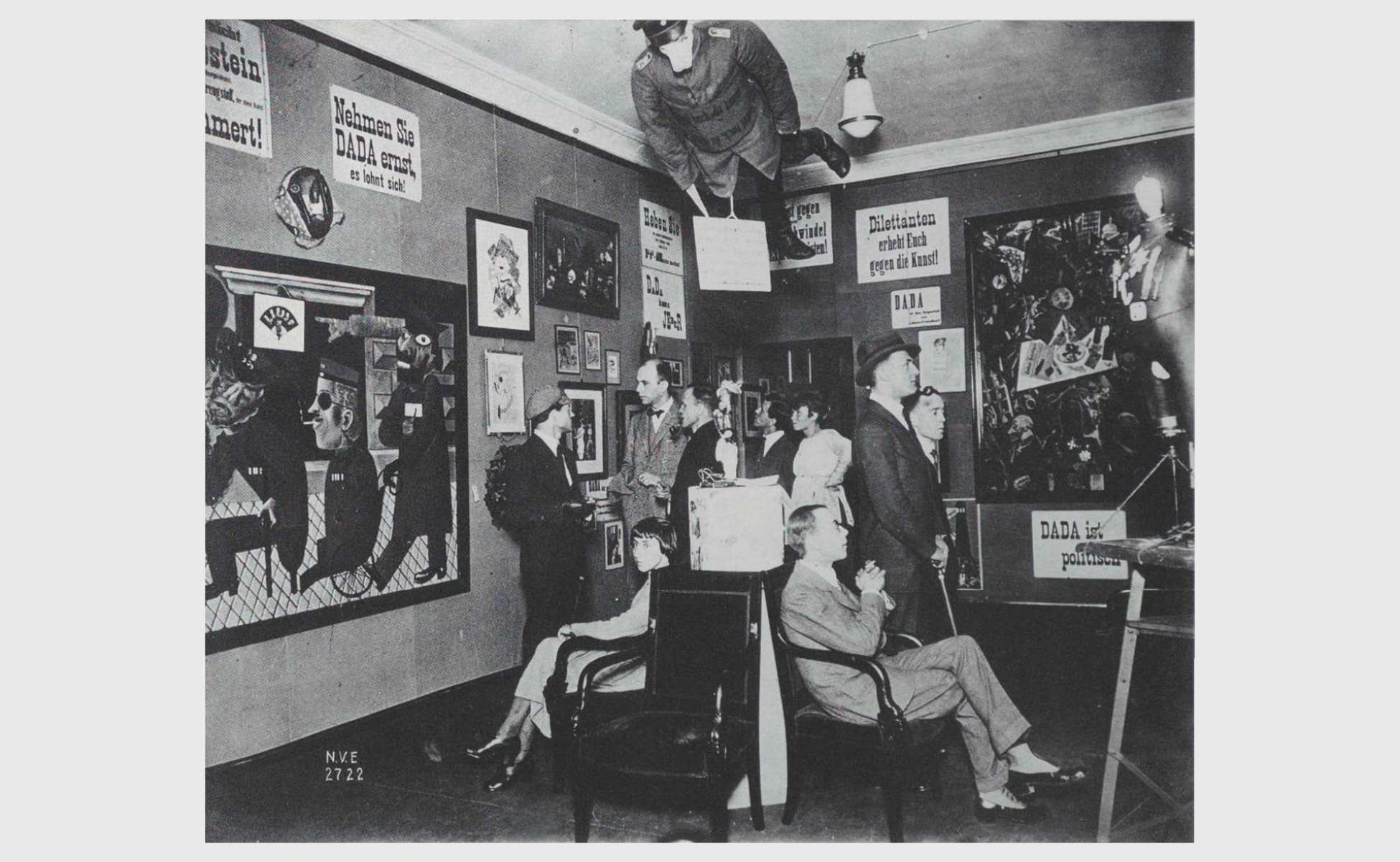 John objected to and criticized any form of art that was detached from a social or political context, i.e. not committed, and described art as "a bourgeois invention" in the German socialist society of the time. As he decided to reform this art, he was also part of the modernist movement of the 1920s.

The Dada movement celebrates mechanization through artistic or graphic expression and Heartfield prefers to call himself a "fotomonteur", with a more technical semantic, rather than an "artist". Heartfield revolutionized the world of printing and graphic design, first breaking the vertical/horizontal norm of text by playing with the typographic characters he scattered in his Dada works. In 1915, he came up with the idea of pouring plaster around the type blocks to hold them at a different angle during printing, thus breaking with the linear tradition of word and letter. John Heartfield sees Dada as "an effort to disrupt the high impulses of the intellect - the spiritual, the mystical, and the subjective - but only to reach the truth behind them. " 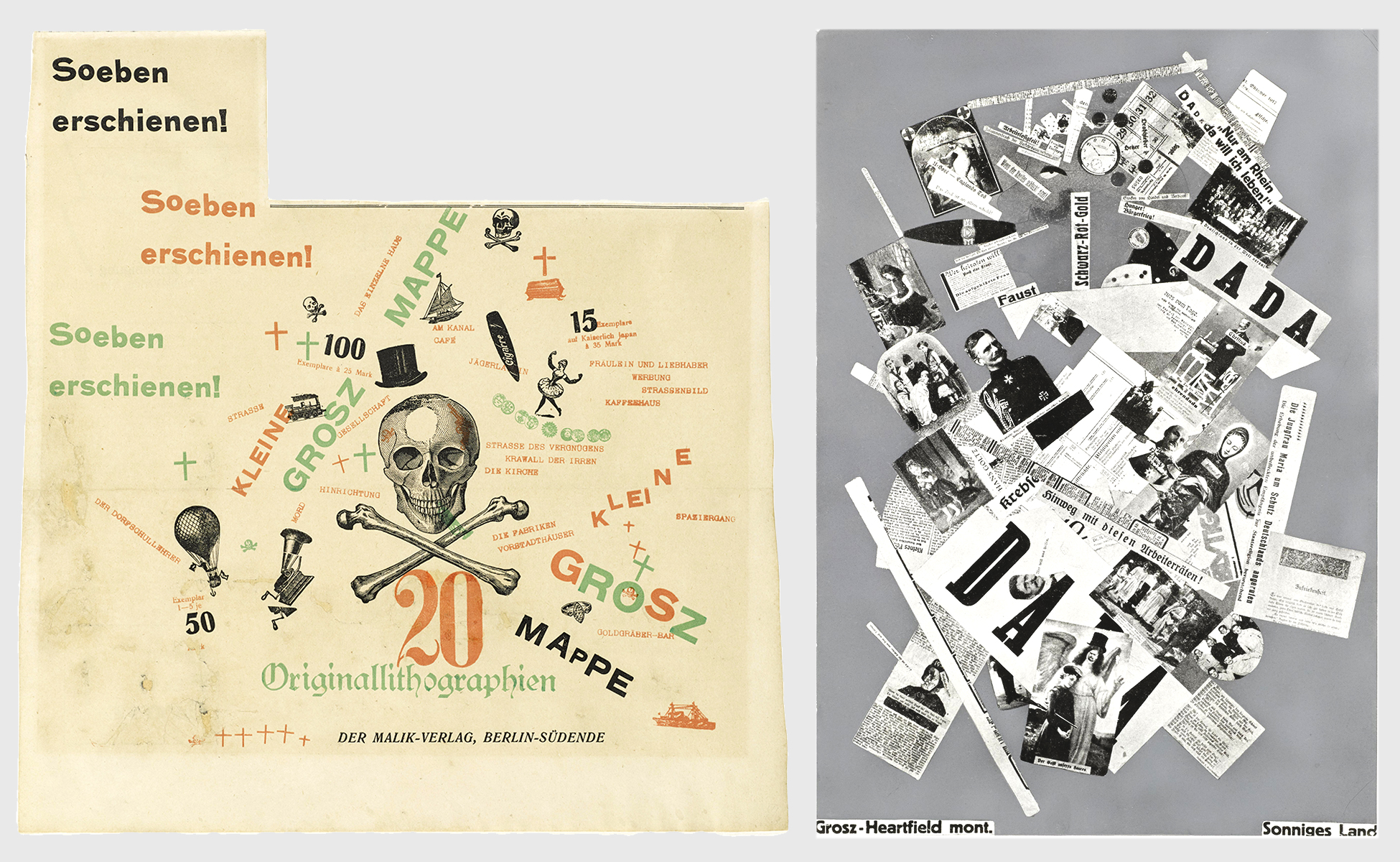 He then gathers images and assembles photomontages from photographs collected (from the press, books, leaflets... which produced numerous images) or that he produced himself, in which he made people pose. His technique of photomontage creates a new image with little visible retouching (a bit like we would do today with photoshop) which allows, through the association of strong ideas, to convey a message by diverting reality, to reveal hidden intentions. He is one of the first (if not the first) to use photomontage as such with Raoul Hausmann, a Dadaist too.

In 1917, John founded a publishing house with his brother, the Malik-Verlage, to publish novels by censored socialist authors, which John illustrated with his photomontages. The very fact of using and diverting old art was prohibited by the party... Heartfield combined photos on these book covers to make their content clear in a spectacularly effective way. He also invented the flap inside the book, and the cover design as a whole tells a story to the future reader. The avant-garde layout of these books is far more modern than what was being done at the time, when illustration was still used extensively, and foreshadows the cover design of the 1950s. Here are some of them:

Cover of the novel "the most sacred goods" by Ehrenburg, in 1931. It represents by association the sacred objects on the cover - money, religion, power - and the strategic relationships played by the great of this world, in the back of the book. Heartfield built a crucifix out of bullets before staging it and taking a photo (you can see the larger images by clicking on them). For the photo of the 3 men climbing the $, he has friends pose on a scaffold which he takes pictures of, develops and then cuts out the silhouettes before matching them to a dollar sign. 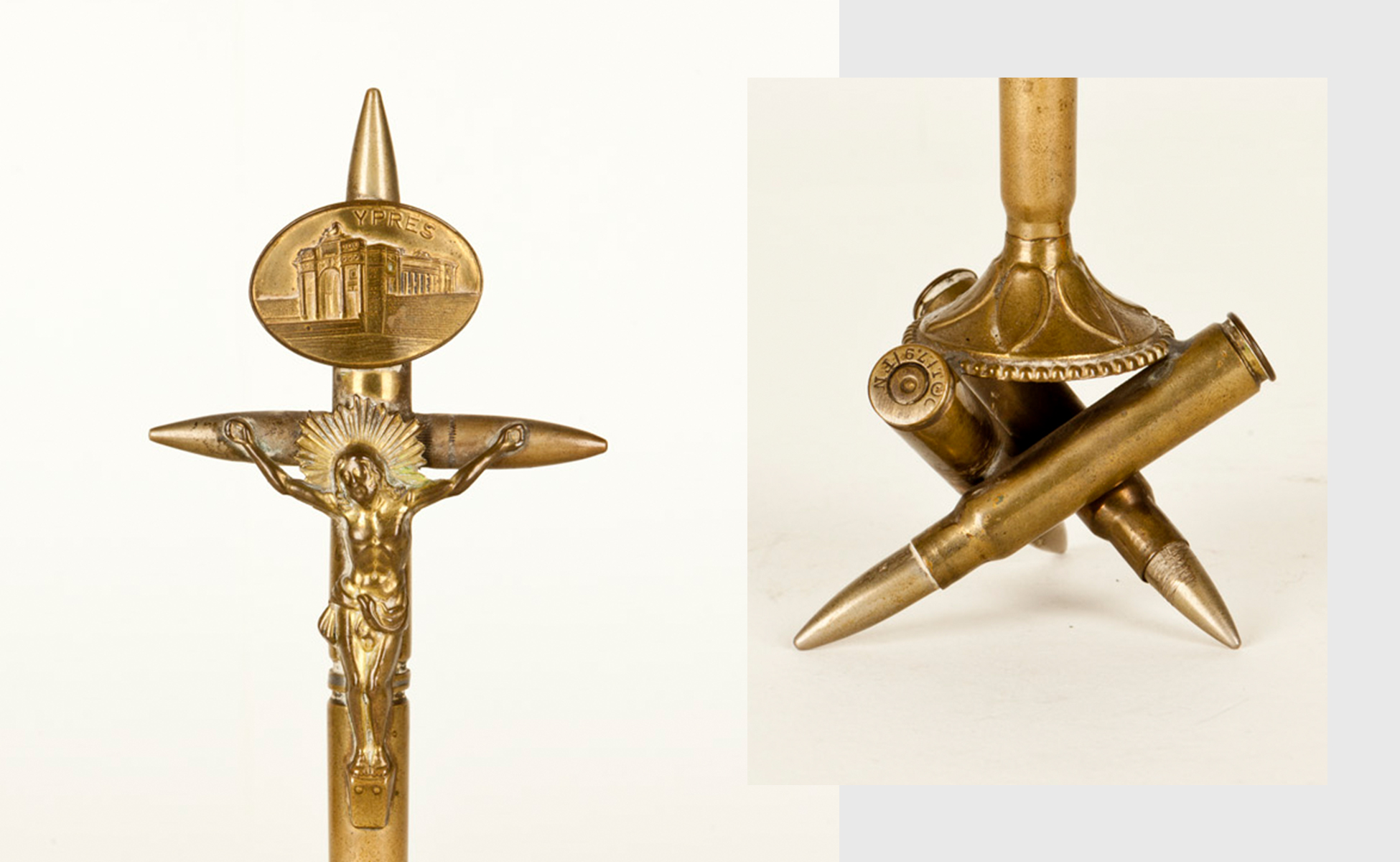 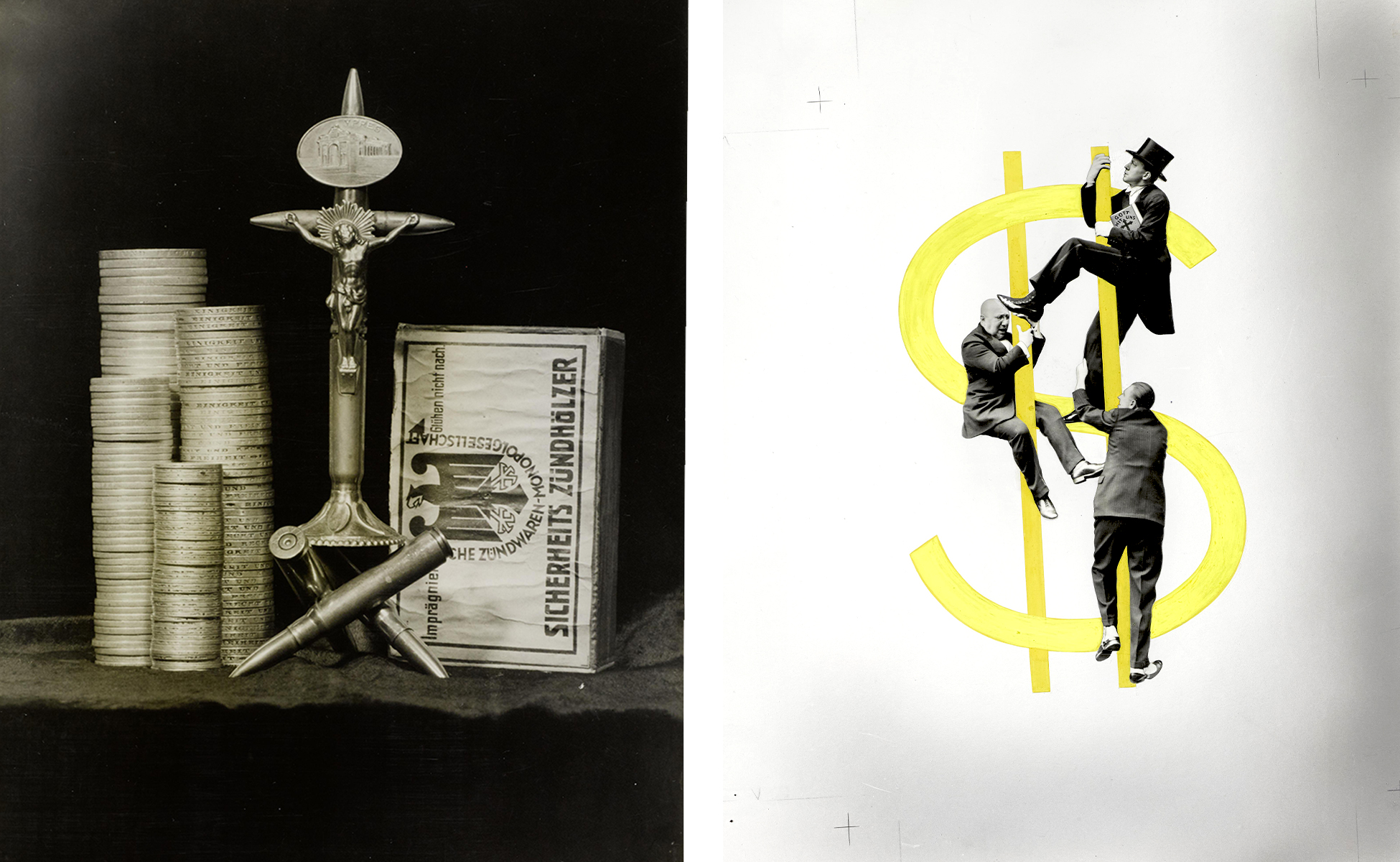 Jungle, Sinclair, 1922 cover. The text is here worked in 3D and directly integrated into the landscape, as if it were part of the architecture of the city, as if the letters were buildings, emphasizing the link between the jungle and the concrete city. 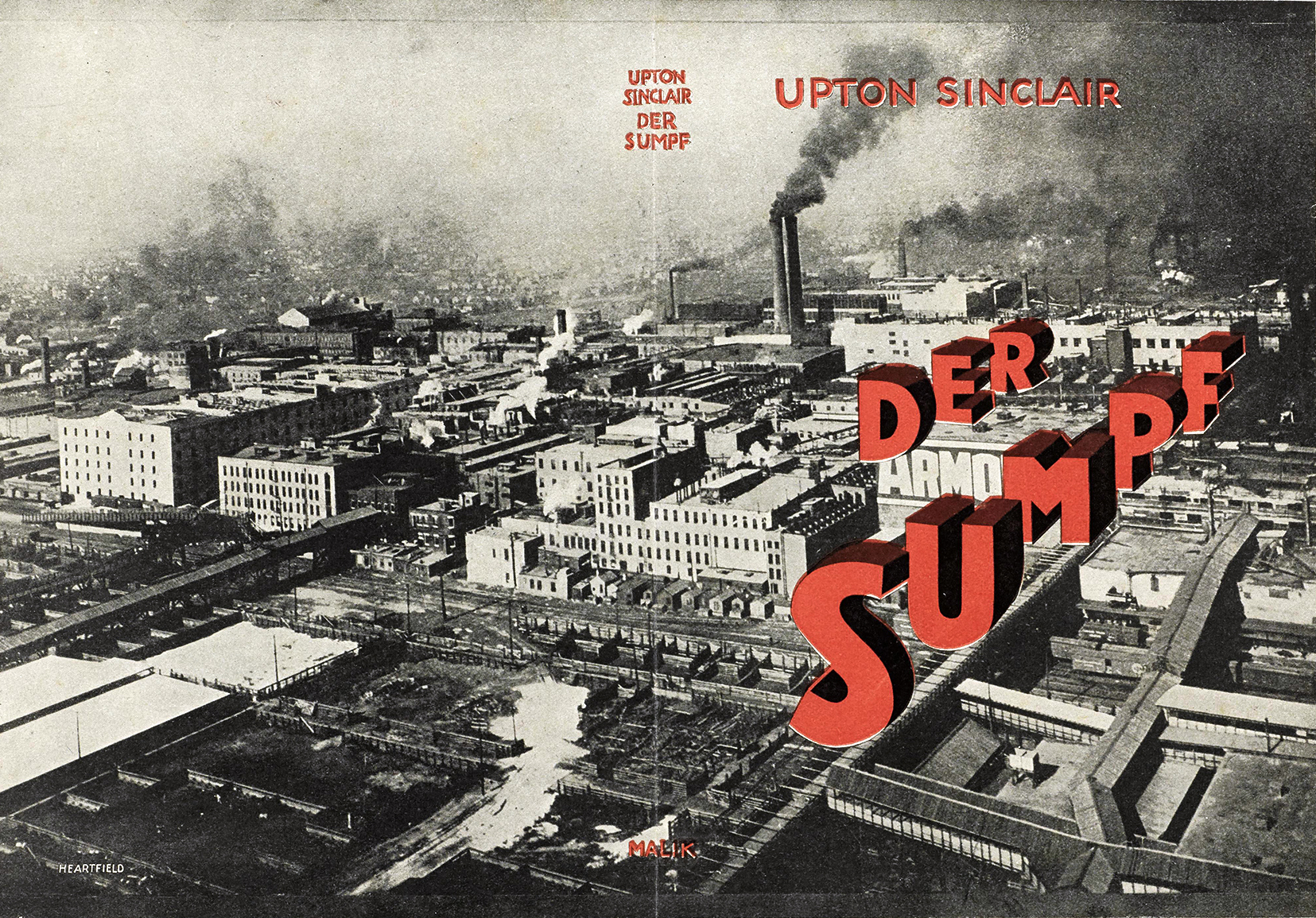 The use of few colors with great impact - red, black, white - echoes the constructivist influence of the works of El Lissitzky (both on the left, 1919 and 1925) and Rodchenko on the right (1923 and 1926), Russian (and communist) contemporaries of Heartfield. 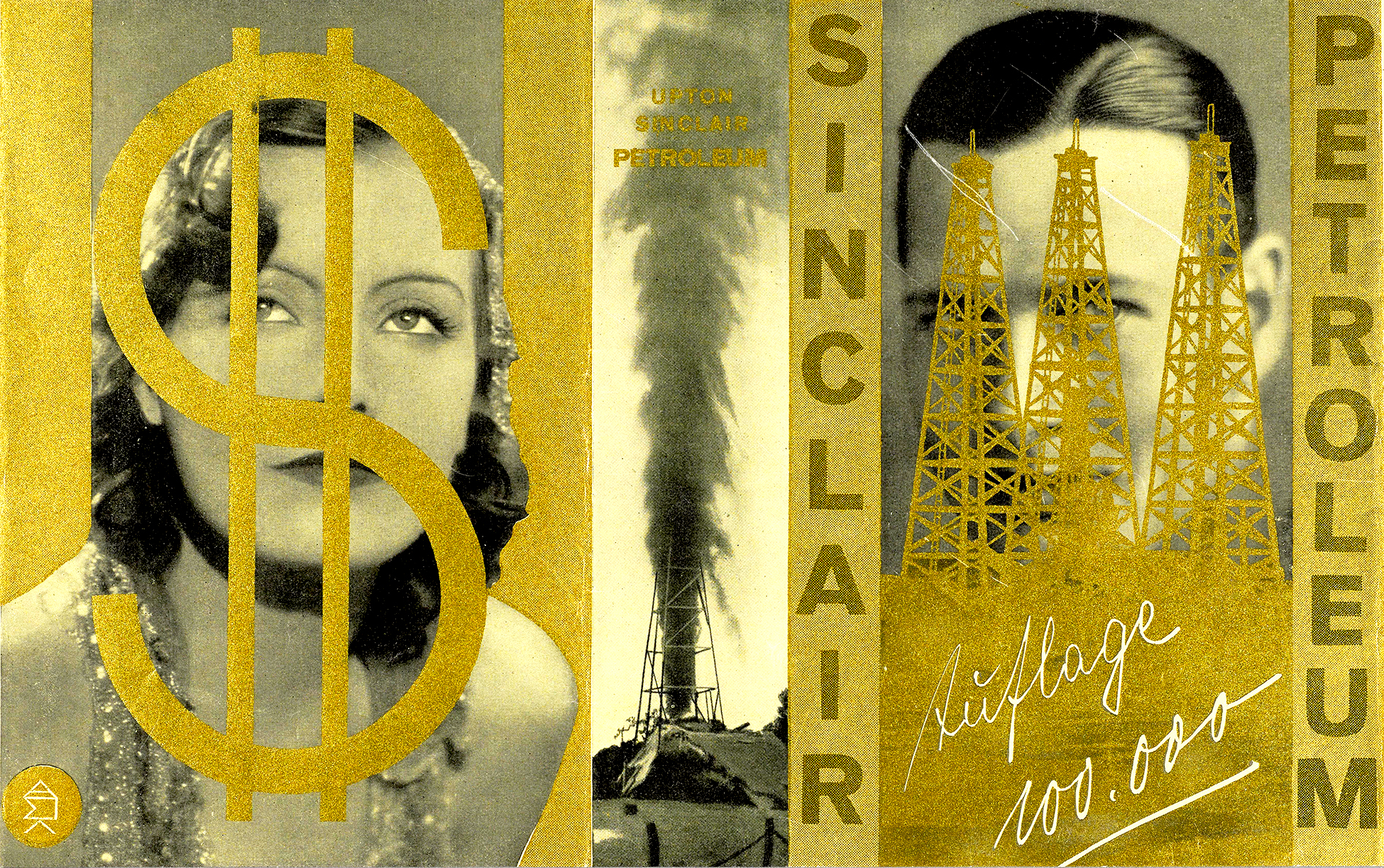 The brothers also print flyers, posters or newspapers in which Heartfield combines provocative typography with those poignant satires.

"Photography as a weapon"

Strangely, his work is based on photography, which he did not consider as an artistic medium but as a fabulous way to lie (in the press) or to reveal the truth (through the satire of his work). Photography was a new medium at the time, which attracted the attention of graphic designers and was just beginning to reveal its potential in the field of communication. Heartfield is really innovative, not only for the tools he uses but also for the messages he conveys on leaflets, various political propaganda materials or book covers. By 1920 Heartfield was already a model for other revolutionary artists, and recognized as a graphic artist. He began by drawing a sketch of artistic direction before supervising the photo shoot -which he did not take himself- and all the steps up to printing, by assistants that he often pushed to the limit. Here, some photomontages from 1926 and 1924 (right).

Followed by two collages from 1927: on the left a sketch for the cover of a sports magazine, die Arena, and on the right "13 Years of Murder, Profit is War!" 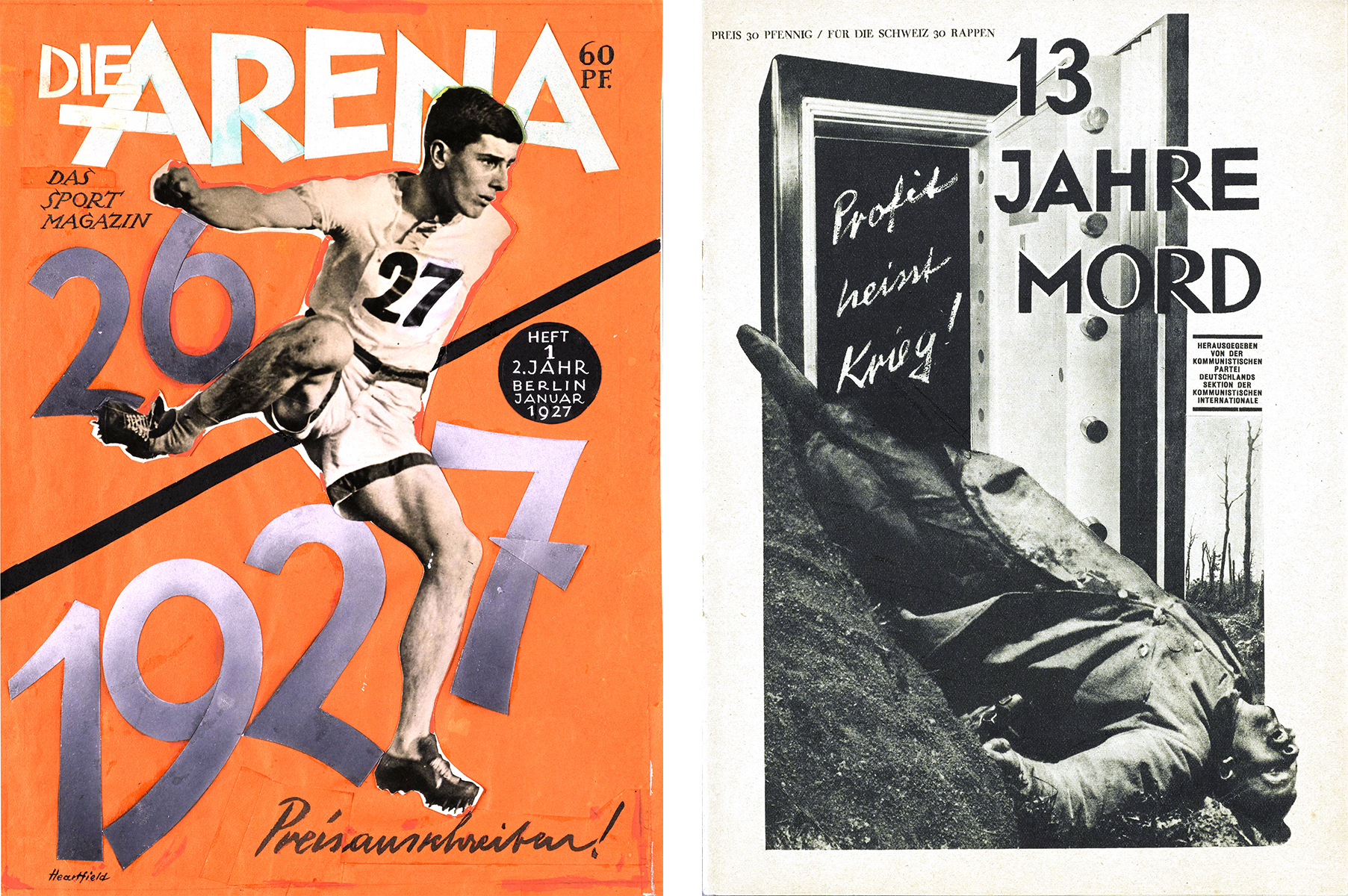 In 1928 he made one of his most famous political posters, for the "List of 5": "the hand has 5 fingers, with 5 you can defeat the enemy. Vote for the list of 5". The idea of the 5 works for the visual as well as the text and brings an overall coherence and visual impact, with this working man's hand, with dirty fingers, reaching out to grab (probably white collars!). We also see the members of the Weimar Republic or the fascist wing hung from the 5 alongside the great religious figures with the slogan "do the accounts. Demonstrate for the revolution". 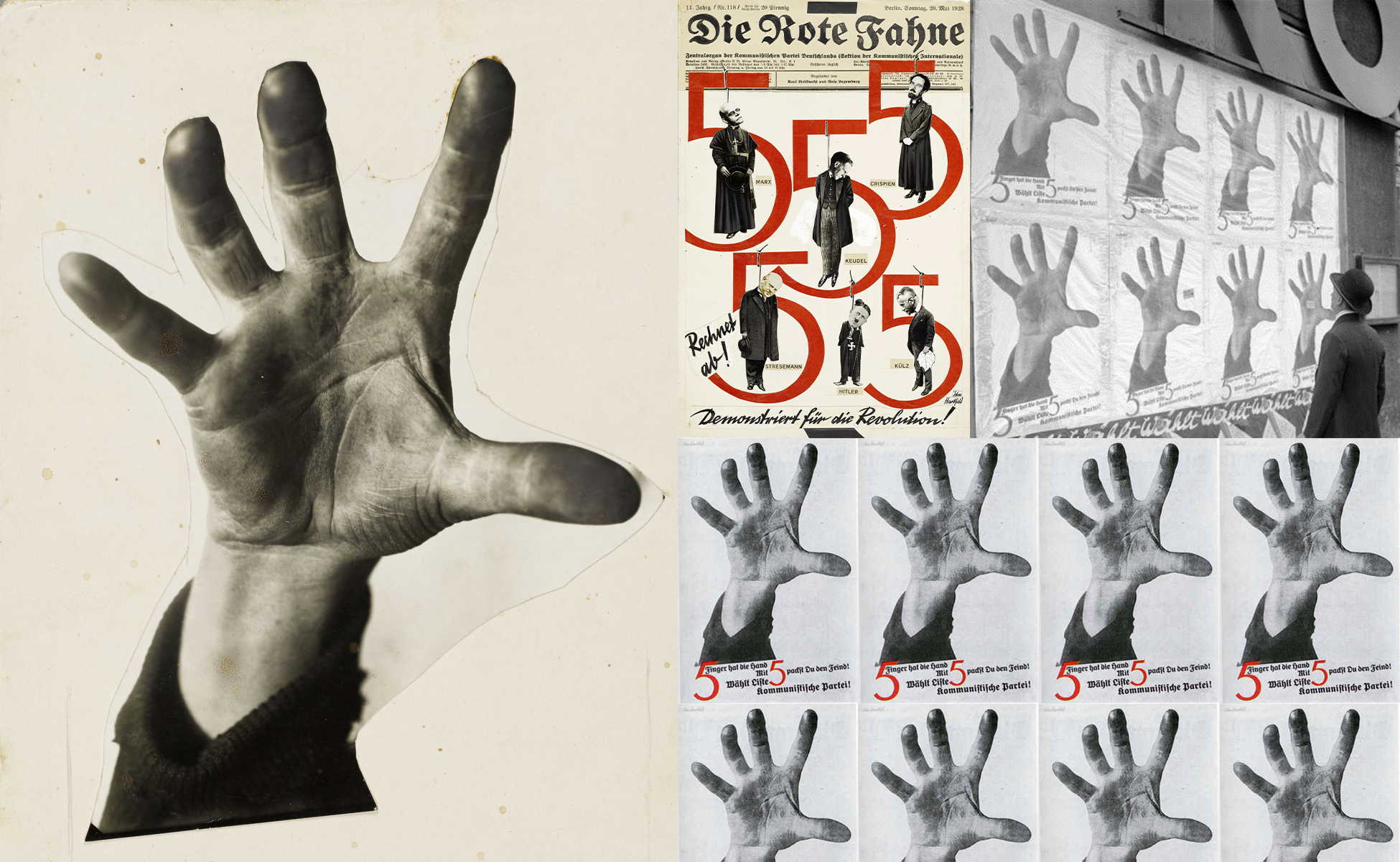 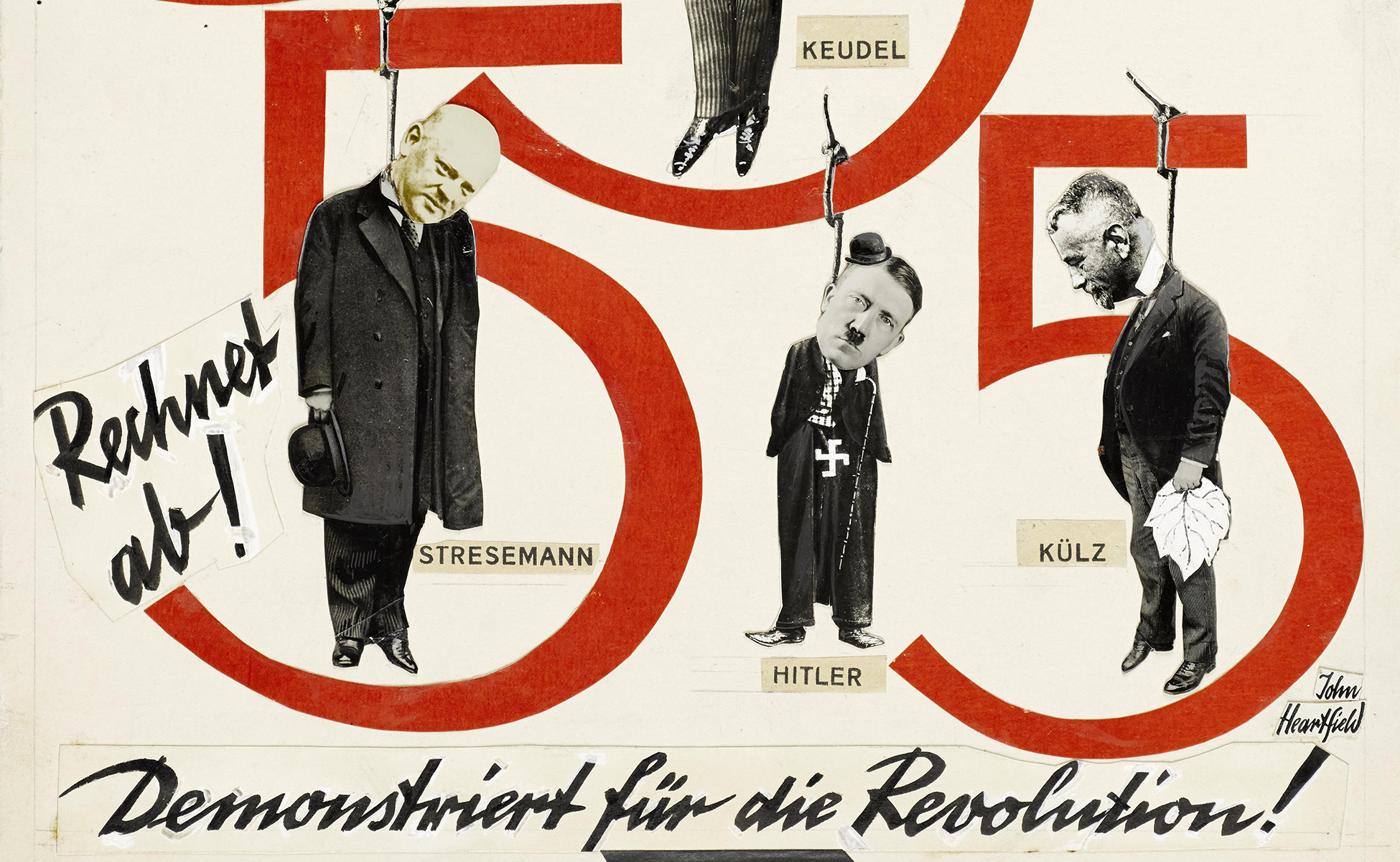 At the entrance of the room dedicated to him in the exhibition Film and Photo of 1929, in Stuttgard, he inscribed the slogan "use photography as a weapon" which underlines his faith in the impact of this new medium and its ability to denounce the perversities of the modern world: fascism, war and its atrocities, Nazism or capitalism. The political and satirical work of John Heartfield is indeed inseparable from a historical context and a political action and his collages necessarily translate an opposition, an anger, a resistance in front of a heavy and intolerable context that he commits himself to reveal.

That same year he produced the satirical cover of "Germany, Germany above all" on the rise of Nazism. This caricature of Germany at the time depicts on the back the police baton and the sword of military power accompanied by the legend "together, fraternally" and on the front a grotesque patriotic man half-bourgeois half-military blinded by the standard proclaiming, in gothic letters, "Germany, Germany above all" from an orifice that serves as his mouth. 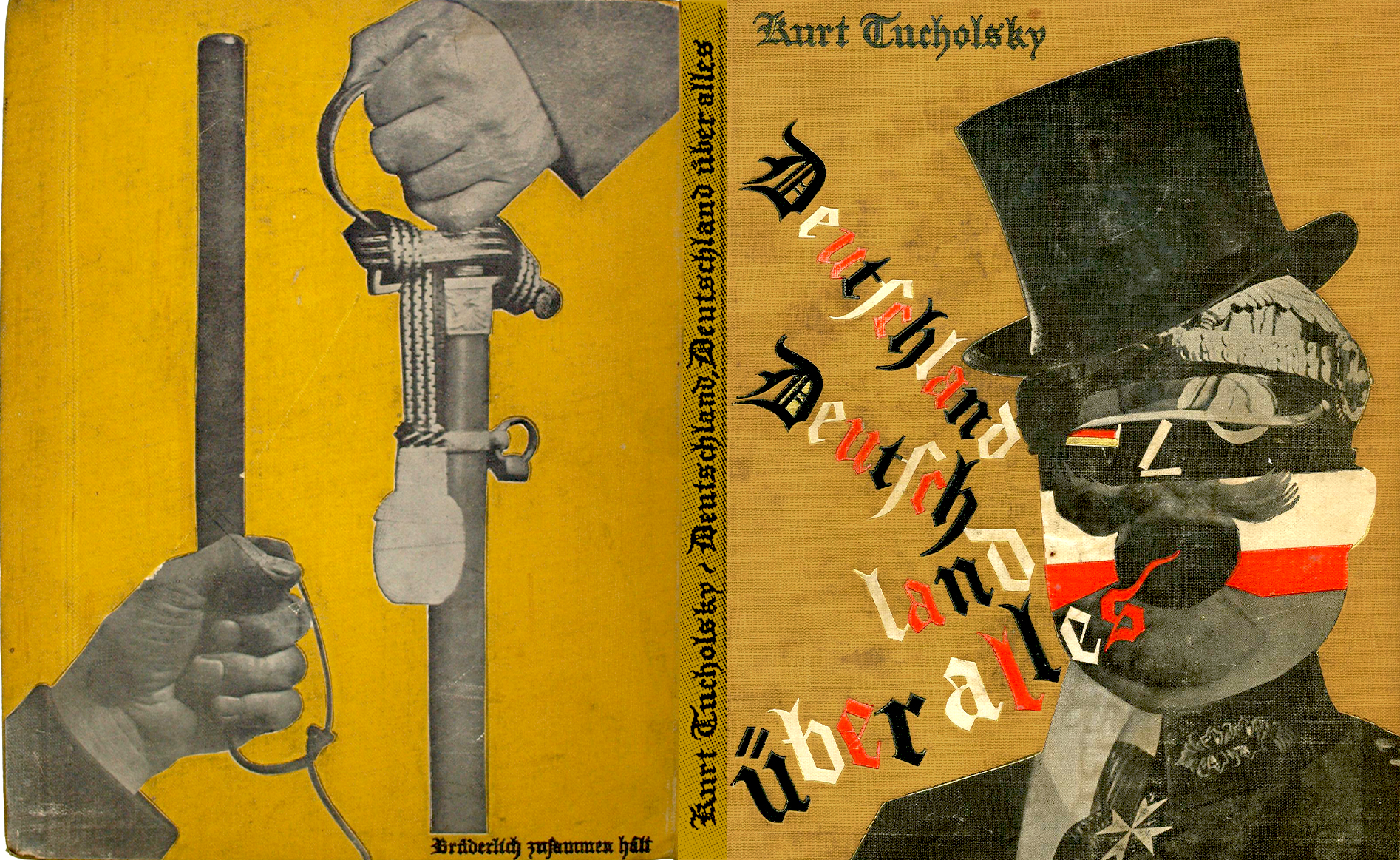 These nationalistic symbols create a very impactful portrayal of the traditionalist German society. On the inside one can find a collage of buttocks with ears, captioned in a very obvious manner: "Berlin idiom". 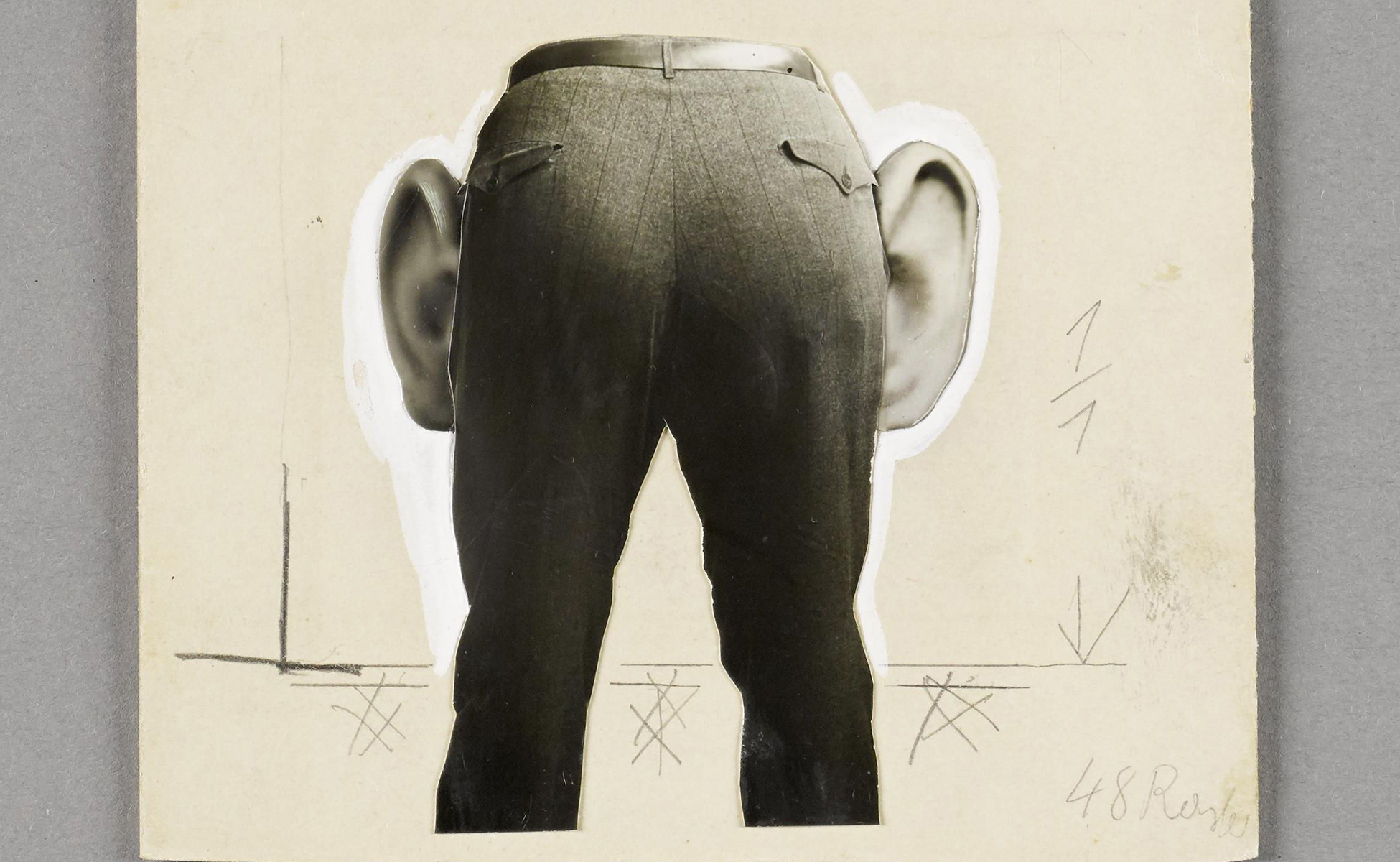 In the 1930s Heartfield is invited to the USSR to demonstrate the usefulness of photomontage to mobilize the masses, although his very organic technique differs greatly from the symmetrical and organized work of the constructivists. He uses statistics graphically organized as the ISOTYPE, a universal visual language and ancestor of pictograms.

Heartfield has a knack for instantly revealing to the general public the hidden evidence of the great institutions' shenanigans. His work is published in Jan Tschichold's magazines (the Art of advertising) alongside other graphic designers of the New Typography. In 1929 Heartfield began his long collaboration with a well-known communist weekly, the AIZ (Arbeiter Illustrierte Zeitung, the Illustrated Workers' Journal), the most widely circulated magazine during the Weimar Republic, in which he published 237 photomontages, most of which were opposed to the rise of Nazism. Heartfield's collages were exhibited in Berlin in 1932 in the "Fotomontage" exhibition alongside Russian avant-gardists such as El Lissitzky and Alexander Rodchenko, and Bauhaus pioneers such as Herbert Bayer and László Moholy-Nagy. 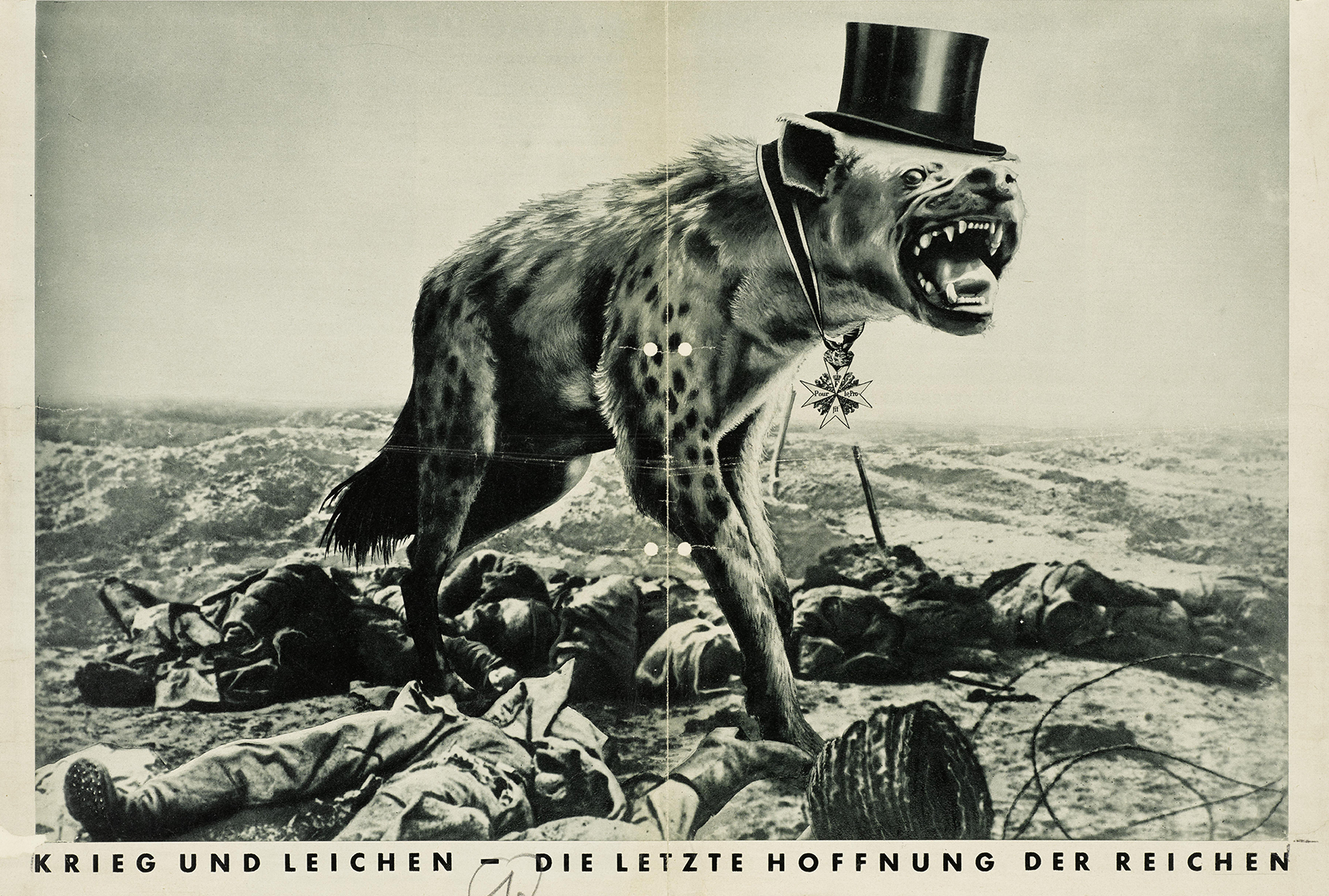 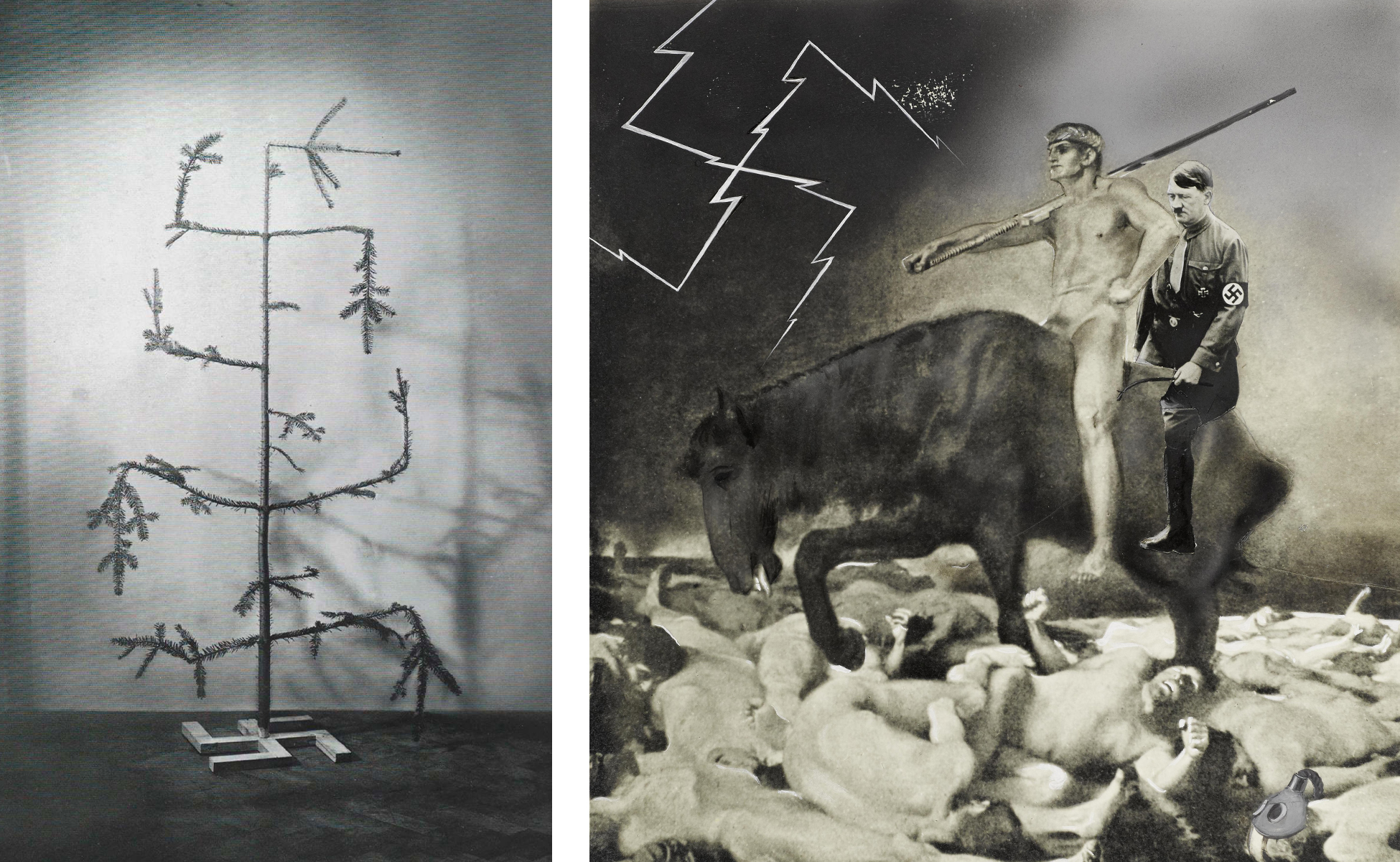 In 1933, with the election of Hitler, the Gestapo is after him and his situation is more than critical. He flees (on foot) to the Czech Republic where he continues to publish for AIZ, despite the fact that he has left his entire photographic collection in Germany! However, he exhibits his work and from there draws the wrath of the Third Reich, which demands that his works be taken down, especially the one of Hitler 'Superman': the Czech Republic resists, this censorship increases the number of visitors but also increases the tension ultimately forcing the removal of the works. The French artist Paul Signac then offers to exhibit his works in France, supported by the Association of Revolutionary Writers and Artists (AEAR). The Gestapo demands that he be transferred back to Germany and he escapes again to England this time in 1938 where he continues to work and exhibit. When England comes to war with Germany in 1940, he is imprisoned for several months as a political refugee, before being able to work as a freelance illustrator, for the Penguin book house amongst other. He returned to Germany in 1950, where he was rewarded for his work, receiving a lifetime pension and an exhibition of his work financed by the new Republic, before ending his life in 1968 in Berlin.

More about Heartfield's work on:
Heartfield Online and the MoMA's 1992 exhibition catalog

Herb Lubalin, the letter as an image

Recognize and play with typographic classification 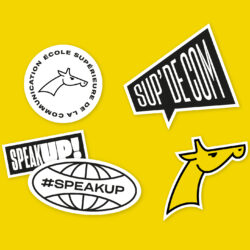 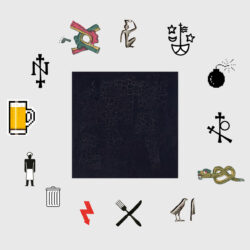